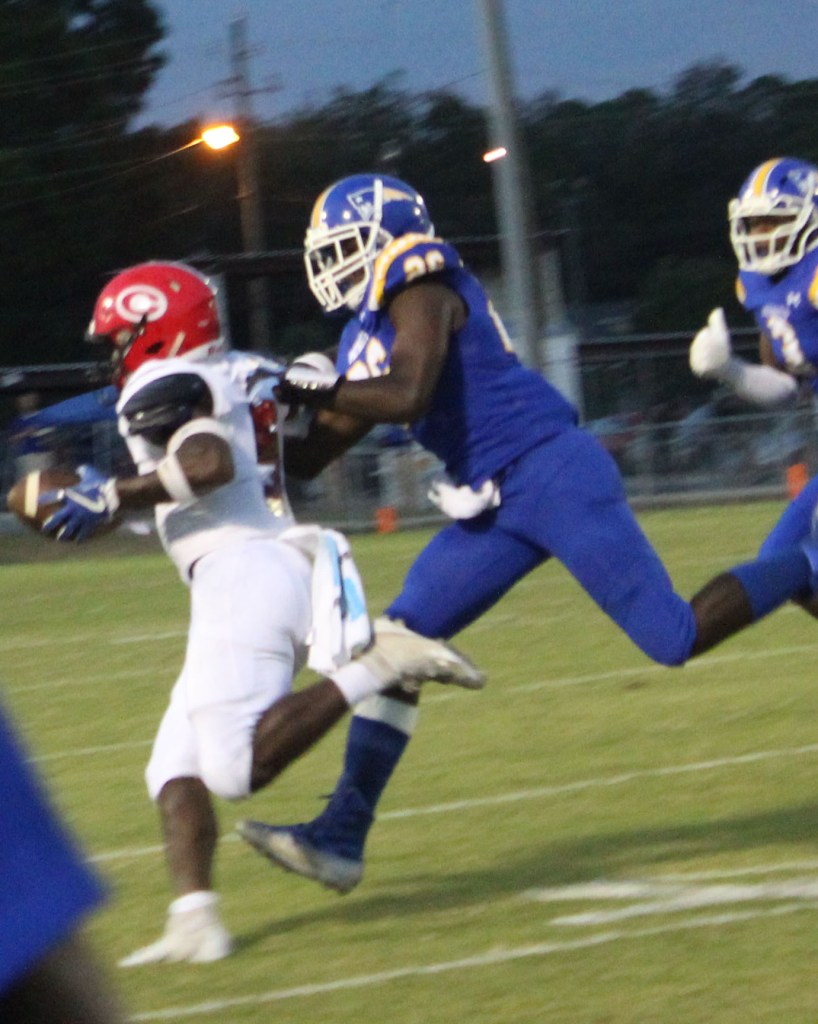 Cameron Patterson (26) chases down a Clinch County ball carrier for a tackle during Friday night’s game.

ROCHELLE- The Wilcox County Patriots welcomed the defending GHSA class A champion, Clinch County, to Rochelle on Friday night. The Patriots gave the Panthers a fight for the majority of the game, but Clinch came away with the 36-12 road victory in the end.

Wilcox opened the game with possession of the ball out near midfield after the opening kickoff, but they were forced to punt after a couple of short runs from Desmond Tisdol and Noah Hollingsworth. The Panthers returned Tisdol’s punt out to their own 32-yard line and went to work with their rushing attack from there.

The Clinch County Panthers picked up big yards on the ground during their first possession and capped off a nine-play scoring drive with a 29-yard touchdown run from Trezman Marshall. The extra point attempt was no good, but the touchdown put Clinch ahead 6-0 with 4:54 to go in the first quarter.

The teams swapped punts over the next couple of minutes, and Matt McAdoo set Wilcox up in good field position after receiving Clinch County’s punt near midfield and returning it to the Panther 21- yard line.

A high snap two plays later led to a fumble recovery for Clinch County that set up another touchdown for Marshall, this time from around 40 yards out. Clinch led 13-0 after the extra point with just over nine minutes to play in the first half.

Clinch added three points to their lead just before halftime with a late field goal after a big defensive stand by the Wilcox defense inside the 10-yard line. The Panthers led 16-0 at the halftime break.

The Patriot defense got the second half started with a big stop to force a Panther punt. Jacquarius Dixon and Ahmad Johnson combined for a sack on the third and long play to set up the punting situation, and McAdoo made another long return to put the Wilcox offense at the Clinch County 37-yard line.

The Patriots were then held to a turnover on downs on the subsequent drive, and Tyler Moorhead scored the third Clinch County touchdown of the night for a 23-0 lead with 4:07 to play in the third quarter.

The teams again swapped defensive stops over the next several possessions. The Patriots received a Clinch County punt at around the 7:40 mark of the fourth quarter and made a couple of big plays to get their first points of the night.

On the first play of the drive, McAdoo took a handoff on a receiver reverse play and broke through the Panther defense for a 27-yard run. Two plays later, Tisdol broke loose for a 38-yard touchdown run to give Wilcox some much needed life. The two-point conversion attempt was unsuccessful, so the Patriots trailed 23-6 with just over seven minutes to go in the game.

The Patriots went with a quick onside kick attempt on the subsequent kickoff and a great bounce allowed Michael Archer to recover the ball to immediately give the Wilcox offense possession of the football again. The Patriots were unable to cash in on the opportunity however, as they turned the ball over on downs after being stopped just short of a first down.

Clinch County tacked on a touchdown with 58 second to go to make the score 30-6, but neither team was finished scoring for the night.

Hollingsworth threw a quick pass over to EJ Howard on the ensuing Wilcox possession that resulted in a 44-yard pickup after a long run by the receiver. The quarterback then threw a pass to Martez Thrower who made a great catch to get the ball down inside the two-yard line for the Patriots. Hollingsworth subsequently punched in a short touchdown run on the next play to make the score 30-12 in favor of Clinch with less than six seconds to go in the contest.

A wild scramble on the ensuing kickoff led to a Clinch County return touchdown as time expired. The Panthers won by a final score of 36-12.

Tisdol led the Patriot offense in the game as well with 68 rushing yards on eight carries and one catch for eight yards. Cameron Patterson had three catches in the game for 20 yards, while Thrower, McAdoo and Howard each had one recpetion. Hollingsworth finished the game with seven completions on 20 pass attempts for a total of 97 yards, and added nine yards rushing to go with his touchdown.

The Patriots are now 3-2 on the season with a 1-1 record in region play. They will be back home next Friday night for Homecoming. The opponent for next Friday’s game will be Telfair County, who fell to 2-3 last night with a 54-0 loss to Irwin County. 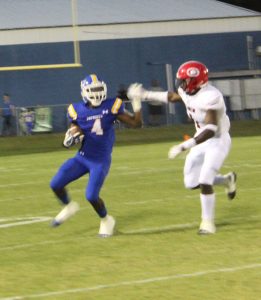 Matt McAdoo (4) attempts to get by a Clinch County defender during a punt return.