Man in Wednesday chase was wanted in Lagrange 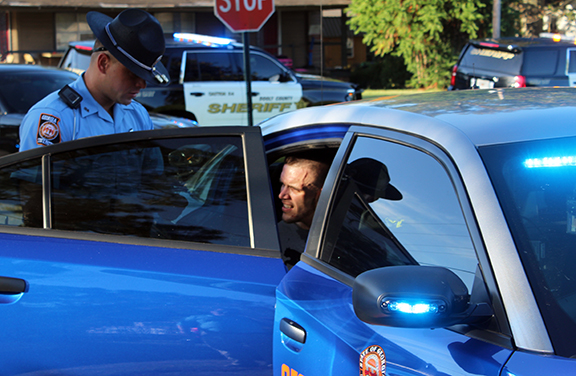 Trooper Chris Forsythe reads the Miranda Rights to David Duke, age 27 of Lagrange, who was apprehended Wednesday morning after a chase that began in Dooly County and ended in Cordele near the intersection of E. 8th Avenue and 4th Street.

CORDELE — The LaGrange man who led local authories on a chase that ended here Wednesday morning was wanted on aggravated assault, battery, and trespassing charges in Troup County due to an incident there last week.

Authories were on the lookout for Duke and the stolen tan Lincoln sedan he was driving when he crossed paths with deputies from the Dooly County Sheriff’s Office on U.S. Highway 41 at around 8:00 a.m Wednesday.

From there Duke sped south into Cordele, where deputies with the Crisp County Sheriff’s Office and troopers with Georgia State Patrol Post 30 joined the chase.

At one point law enforcement officers decided to end active pursuit of Duke in the hope he would not endanger heavy morning traffic that included school buses. They were forced to restart high-speed pursuit after Duke continued to drive like a madman.

According to GSP Trooper First Class 2 Chris Forsythe, who picked up the pursuit of Duke near the intersection of 3rd Street and 29th Avenue, Duke fled north on 3rd Street through stop lights at 24th Avenue and 16th Avenue and across the railroad tracks just north of 12th Avenue.

Trooper Forsythe said Duke reached 117 mph on the highly-trafficked street, which has a speed limit of 35, and Duke’s car flew six feet in the air when he crossed the railroad tracks that sit atop a steep embankment.

Duke traveled four more blocks up 3rd Street and crashed his vehicle shortly after he turned west onto 8th Avenue. He attempted to flee on foot but Forsythe subdued and arrested Duke as fellow law enforcement officers arrived and a GSP helicopter hovered overhead.

A search of Duke turned up 43 grams of methamphetamine along with a needle and syringe. Forsythe said Duke told him he swallowed around four more grams during the chase along with 10 mg of xanax.

After EMTs treated Duke for abrasions on his leg at the scene, he was transported to Crisp Regional Hospital for observation. From there Duke was transported to the Troup County Sheriff’s Office for processing on the felony charges awaiting him there.

Afterwards he will be returned to Crisp County to answer felony charges of receiving stolen property (the car), fleeing/attempting to elude, and three more counts related to the 43 grams of methamphetamine. He has also been cited for dui, speeding, reckless driving, and obstruction.

It is unknown at this time if any charges will be filed by DCSO or the Cordele Police Department, which also assisted in the case. Duke had previously served just over 10 months in Coastal State Prison beginning in April of 2012 for burglary and credit card fraud convictions, according to information provided by the Georgia Department of Corrections.