Cougars hold off Thomasville in thrilling shootout at The Den 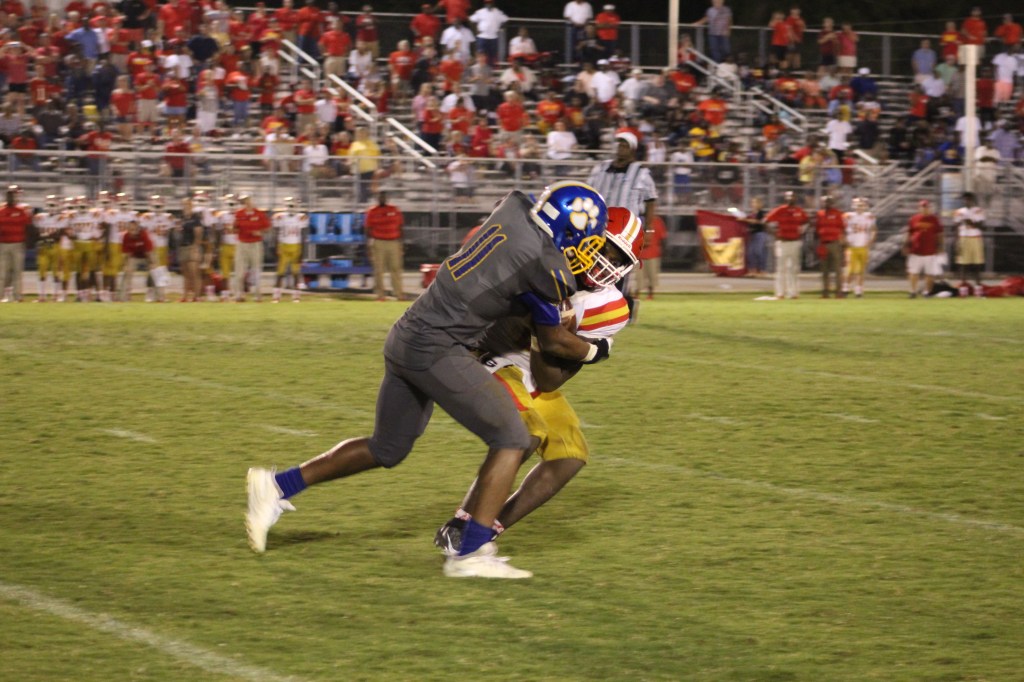 Crisp County linebacker, Chris Paul brings down the Thomasville quarterback for a loss of yards during Friday night’s game.

CORDELE- The Crisp County Cougars won a thrilling contest over the Thomasville High School Bulldogs on Friday night in Cordele. Crisp prevailed 42-38 with a late defensive stop that helped seal the victory.

The Cougar rushing attack ended up playing a crucial role in the scoring all night long as the offense ran up over 400 yards of total offense. The offensive line opened holes all game long for Cougar runners Marquise Palmer (25 carries for 224 yards and two touchdowns) AJ Lofton (104 yards rushing and one touchdown), and Anthony Lewis who chipped in with some important carries and two scores.

Thomasville kicked off to start the contest and Tubby Spivey brought the return out to the Crisp 38-yard line, where the Cougars were able to pick up a quick first down but ultimately were forced to punt. The Bulldogs got pressure in the backfield on the punt attempt and came up with a blocked kick to set themselves up with good field position.

Lofton and Kamron Moate came up with plays on defense to force the Bulldogs to punt the ball right back, and the Cougar offense went to work on their first scoring drive of the night from their own 32-yard line.

Lofton hit Palmer for a quick pass to get the drive off to a good start and the two subsequently made big gains on the ground to get the ball inside the Thomasville 20-yard line. Lofton then threw a pass to Jy’Nick Mainor to set up a first and goal, and Lewis punched in a short touchdown run two plays later for the first points of the night. Connor Richmond’s PAT was successful and the Cougars had the first lead of the game at 7-0 with 4:24 to play in the first quarter.

The Bulldogs took the ensuing kickoff out to their own 21-yard line and five plays later they tied the score with a 31-yard touchdown pass. The score was tied at seven apiece with 2:46 to go in the first period.

After another Cougar punt, Thomasville attempted a field goal from around 40 yards out but the kick sailed wide left.

The Cougars went right back to work on offense after the missed kick with a quick pass from Lofton to Jaylin Epps for around a 15-yard pickup. Palmer followed up with another big run to set up first and goal for the Cougars and Lofton punched in a score on a quarterback keeper on third down to restore the Cougars’ lead to 14-7 with 8:49 to go in the second quarter.

The Bulldogs attempted a trick play on the next series and Lofton came up with an interception to get the Cougar offense back on the field, and just two plays later Jack Carter threw a pass over the middle to Epps and the receiver outran Thomasville defenders to the end zone for a 37-yard touchdown. The Cougars led 21-7 after the extra point with 7:45 to play in the first half.

A Thomasville fumble near midfield set up the next Cougar score, and this time it was another touchdown run from Lewis for a 28-7 Crisp County lead with 4:12 to go in the half.

Thomasville tacked on two touchdowns before half, but the Cougars held the lead at 28-21 going into the break.

The Bulldogs came out after half and marched right down the field for a touchdown run to tie the score at 28 apiece with 8:08 to go in the third quarter.

The Bulldogs came up with an interception on the next Cougar possession, and Thomasville then took their first lead of the night on a short field goal for a 31-28 advantage with just under five minutes to go in the third quarter.

A deep pass from Lofton was intercepted on the next drive, but the Cougar defense came up with a big stop thanks to important tackles from Preston Lavant and Moate.

Lofton returned the ensuing Bulldog punt back to the Thomasville 36-yard line, and three plays later Palmer shed a couple of potential tacklers and broke loose for a 31-yard touchdown run. The Cougars were back in front 35-31 with 23 seconds to go in the third quarter after Richmond’s point after.

The Bulldogs hit right back on the following drive with a 32-yard touchdown pass for a 38-35 lead with about 10 and a half minutes to go in the game.

After the subsequent kickoff, the Cougar rushing attack once again came up with some big plays. Palmer and Lewis ran for a couple of decent gains on the first two plays of the drive, and Lewis then broke free for a run of about 52 yards before being run down inside the Bulldog 10-yard line. Palmer capped the drive off with a short touchdown run on the very next play to put Crisp ahead 42-38 with 8:53 to play in the contest.

The teams traded defensive stops over the next few drives until Thomasville blocked another punt to set themselves up at the Crisp 25-yard line with a minute and a half to go in the contest and the game on the line.

Chris Paul made a big tackle for loss on the first play of the drive, and Lofton came up with a pass breakup on the second down play. The Bulldogs threw another incomplete pass on the third down play, so the game ended up coming down to the fourth down play.

The Cougar defensive line got heavy pressure in the Thomasville backfield on the play, and Trenton Richey ended up hitting the quarterback and forcing him to throw an incomplete pass for a turnover on downs.

The Cougar offense picked up a first down on a run out wide by Palmer a couple of plays later and they ran out the remaining few seconds from there for the 42-38 win.

“I told y’all before the game that I felt like something special was going to happen tonight, and every man that was out on that field did their job to the best of their ability,” Head Coach Brad Harber told the Cougars after the game. “That is all us coaches can ask for. When you perform like that you are hard to beat.”

Harber was pleased with the effort of his offense and credited that to the preparation all week.

“Our whole offensive staff has watched film every week of every game and every practice and we always felt like we were just inches away from being where we need to be on offense. We made some mistakes tonight, but we are a lot closer than we were before and it feels really good to score 42 on a team as good as Thomasville,” Harber said.

The Cougars are now 4-3 on the season and will have an off week this coming week before starting region play at home against Monroe on Friday, October 12. 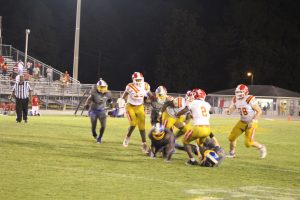 Crisp County linebacker Trenton Richey comes up with big pressure on the quarterback to force an incomplete pass on a late game fourth down play. 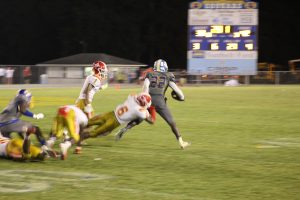 Crisp County running back Marquise Palmer (22) shakes off a Thomasville Bulldog defender
during a run in Friday night’s game. Palmer had 224 yards and two touchdowns in the game. 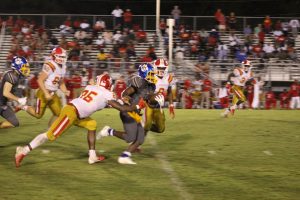