CORDELE- The Crisp County High School softball team finished up region play for the season with a sweep against Monroe on Thursday evening to put the final touches on their region 1-AAA championship. The Lady Cougars celebrated seniors Shelbi Cobb and Caitlyn Bellew on the night and had no trouble taking care of Monroe, picking up run-rule wins of 15-0 in game one, and 16-0 in the second contest.

Crisp opened up a 6-0 lead in the bottom of the first inning before Monroe was able to record the first out. Riley Blampied had two doubles and multiple RBIs in the inning while also scoring two runs. Rylee Little had a double and two RBIs in the first inning while also scoring a run. Megan Bloodworth and Kirin Webb each scored two runs and chalked up an RBI in the inning, while Cobb and Jo Brady each tacked on an RBI. Bellew had a walk and a run scored in the inning and Ainslee Forsythe had a hit, a walk and a run scored in the frame. The Lady Cougars led 11-0 when the first inning finally came to an end.

Peyton Adkins led off the bottom of the second by reaching base on a Monroe error and she came around to score shortly after. Bellew, Cobb and Bloodworth also scored in the bottom of the second to bring the lead out to 15-0. The game was called after the top of the third inning for a run-rule Crisp County win. Duckworth picked up the victory in the circle with three hitless innings pitched, five strikeouts and just one walk.

The Lady Cougars scored all 16 of their game two runs in the first inning as they batted around twice.

Blampied hit two home runs during the 16-run inning, the first a two-run shot and the second of the three-run variety. Byah Fields had three runs batted in during the scoring barrage while Olivia Taylor and Cobb each had two RBIs in the inning.

Game two was also called at the conclusion of the top half of the third inning for a run-rule early finish.

Adkins was the winning pitcher for the Lady Cougars in the contest going three innings, allowing just two hits and striking out six Monroe batters.

The wins over Monroe confirmed Crisp’s region title as the Lady Cougars finished at 8-1 in region play with an overall record of 18-3.

The 1-AAA region title means Crisp County will have the chance to host the first two rounds of the GHSA AAA state playoffs. The first round best of three series will take place between Tuesday, October 9 and Friday, October 12. Crisp’s opponent for the games is still to be determined at this time due to other teams still finishing up region play over the course of this coming week. The Lady Cougars have one more regular season tune-up scheduled to play on the road at single A Marion County (17-5). The game against Marion is scheduled for Thursday afternoon at 5 p.m. in Buena Vista. 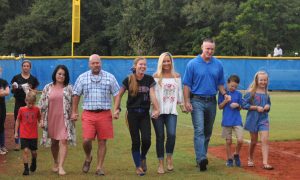 Caitlyn Bellew leads her family out to her spot on the field during the Senior Night festivities that took place between the two games on Thursday evening. Bellew recorded one hit, scored four runs and had one RBI between the two wins over Monroe. 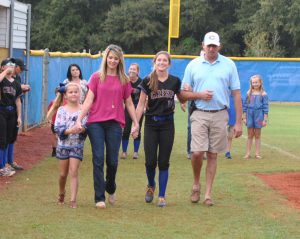 CCHS senior outfielder, Shelbi Cobb, makes her way onto the field escorted by her family during Thursday evening’s Senior Night activities. She had two hits, three runs scored and three RBIs between the two games against Monroe.