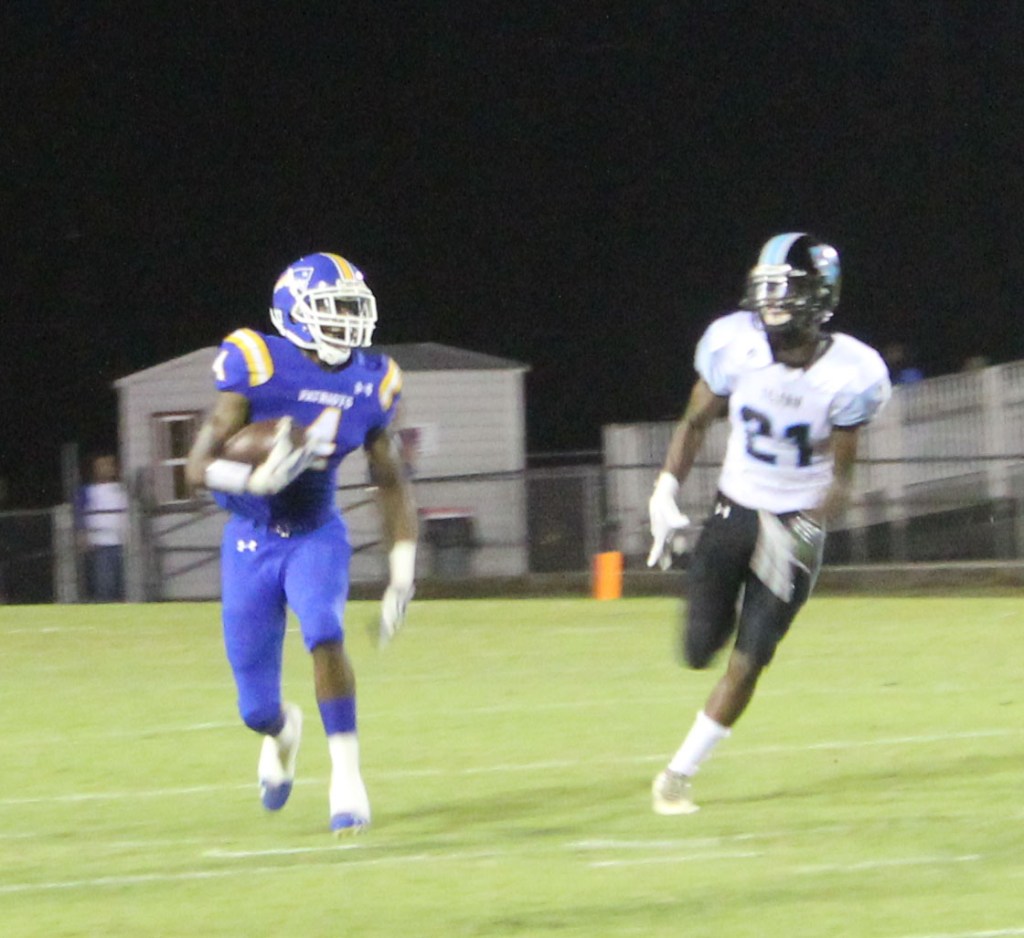 ROCHELLE- The Wilcox County Patriots defeated region rival Telfair County on Homecoming on Friday night. The Trojans opened with the first score of the game but Wilcox came back to take a second quarter lead before pulling away for the win by a final score of 22-10.

Telfair scored the first touchdown of the game on a 73-yard touchdown run and led 7-0 just over a minute into the game.

The Patriots received the ensuing kickoff and used seven carries by running back Desmond Tisdol, including one for 33 yards, and a pass from Noah Hollingsworth to Curtis Leflore for 17 yards to get deep into Trojan territory. The Telfair defense did just enough to stop Wilcox on the drive, however, as the Trojans held the Patriots to a turnover on downs inside the 10-yard line.

The Wilcox defense quickly forced Telfair into a punting situation and Matt McAdoo returned the punt 10 yards to the Trojan 42-yard line to give the Patriot offense good field position for their next possession.

On the third play of the drive, Hollingsworth completed a nine-yard pass to EJ Howard for a big first down at the Telfair 32-yard line, and Hollingsworth scored on a 32-yard touchdown run on the subsequent play. Manny Carrillo tied the score at seven apiece with 2:39 to go in the first quarter after his extra point was successful.

Telfair County used a couple of big plays on their ensuing drive to get down inside the Patriot 25-yard line, but the Wilcox defense forced a turnover on downs on the first play of the second quarter. The teams then traded punts and field position over the next couple of possessions until Wilcox took their first lead of the game late in the first half.

The Patriots started the scoring possession at their own 27-yard line and got contributions from Tisdol, Hollingsworth, Christian Freeman and Jacquarius Dixon on the 12-play drive. The biggest play of the drive was a 36-yard pass from Hollingsworth to Tisdol that moved Wilcox inside the Telfair 40-yard line. Tisdol scored a touchdown on fourth and goal from the one-yard line to cap off the scoring possession. Carrillo’s extra point made the score 14-7 in favor of Wilcox with just over a minute to go in the first half.

The Trojans made an attempt to score just before halftime after moving the ball into Wilcox territory but Martez Thrower sacked the Trojan quarterback on fourth down to stop the threat, so the Patriots went into the halftime break and Homecoming festivities with the 14-7 lead.

The teams swapped punts to open up the second half, and Telfair scored the only points of the third quarter after intercepting a pass deep in Patriot territory. The score came on a 31-yard field goal to cut the Patriot lead down to 14-10 with 4:04 to play in the third quarter, but the kick proved to be Telfair’s last points of the night.

The ensuing Patriot drive started at their own 44-yard line after the kickoff return by Freeman. A couple of runs by Dixon and a pass from Hollingsworth to Cameron Patterson moved the Patriots inside the Telfair 40-yard line. A false start and a holding penalty forced the Patriots into a long yardage situation, and Wilcox had to punt.

After forcing a Telfair punt to open up the fourth quarter, the Patriots extended their lead out to 12. The scoring possession started at the Trojan 48-yard line, and Thrower ran for 20 yards on the first play. A nine-yard run from Hollingsworth kept the drive moving, and Tisdol picked up four yards on a fourth and two run to set up the score. The touchdown came on the very next play on a 16-yard pass from Hollingsworth to Branson Owens, and Howard threw a pass to Hollingsworth for the two-point conversion. The Patriots led 22-10 with 8:12 to go in the game.

The teams traded punts and defensive stops over the remainder of the game, and an interception by McAdoo late in the contest helped seal the Wilcox win.

Hollingsworth finished the game with 11 completions on 16 pass attempts with a touchdown and 114 yards passing, while also adding 59 yards on nine carries with one rushing touchdown. Tisdol had 21 carries for 106 yards and one touchdown and the one catch for 36 yards. Dixon and Thrower each finished with 20 yards rushing. Patterson, Howard, Freeman and Kemorrian Larkin all had two catches apiece.

Thrower was a big contributor on defense with six total tackles, including two for a loss of yards and the sack. Owens also had six tackles and combined with Azavion Deans for a sack. Michael Archer had four tackles and one sack in the game, while Tisdol pitched in with four total tackles. Justin Moore had three tackles and a sack, while JayQuan Brown added three tackles as well.

As of the most recent GHSA class A playoff power rankings, Wilcox was ranked number 16. The top 24 ranked teams make it into the playoff at the conclusion of the regular season.

Wilcox is now 4-2 overall so far this season with a 2-1 record in region play. The Patriots are off this week and will be back in action on the road at Charlton County (3-2, ranked number 10) on Friday, October 12 for their next game. 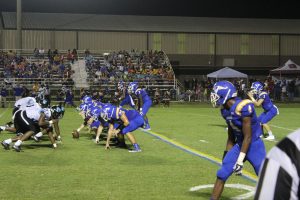 The Wilcox County offense lines up for the next play. 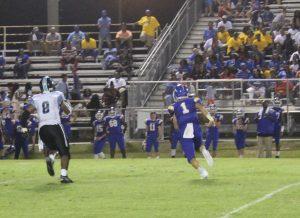 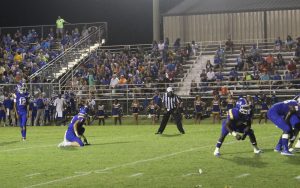 Wilcox County kicker, Manny Carrillo, lines up for one of his extra points as quarterback Noah Hollingsworth holds.