CORDELE- The Crisp Academy Lady Wildcat softball team matched up with a tough Citizens Christian Academy (15-2) team on Monday afternoon. The Lady Wildcats kept the game close over the first several innings, but a few missed opportunities led to them falling by an 11-2 score line in the end.

CCA took an early lead in the contest with a run in the top of the first inning, but the Lady Cats quickly found an equalizing run in the bottom half of the frame. Eliza Hill picked up a one-out single, and later came around to score the run on an RBI double by Mia Purvis. The score was tied at 1-1 entering the second inning.

The Lady Cats cut into the lead in the bottom half of the third to get back within two runs of CCA. Erika Mauldin led off the inning with an infield hit to give CA a good start to the inning. A fielder’s choice groundout in the subsequent at bat ended up leaving Allie McPherson at first base with one out, but she immediately put herself into scoring position by stealing second base. Hill followed with a hit that left CA runners at second and third base with one out. Purvis came up later in the inning and hit a ground ball to third that led to an error and allowed McPherson to score. CA trailed 4-2 going into the fifth inning.

CCA added seven more runs over the remainder of the game for the final score of 11-2.

Hill finished the game as the offensive leader for the Lady Cats with three hits in four at bats with a run scored. Maudlin also finished with three hits in the contest, while Purvis had two hits. Maddie Reed, Haley Odom and Mary McCabe each added one hit for the batting lineup. Odom, Reed and McPherson also made a handful of difficult plays in the field for the Lady Cats, with a few notable tough defensive efforts that resulted in outs.

The Lady Wildcats finish out their regular season schedule with a home double-header against Valwood starting at 4:30 p.m. on Thursday afternoon. 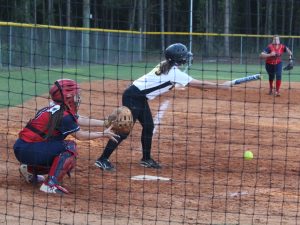