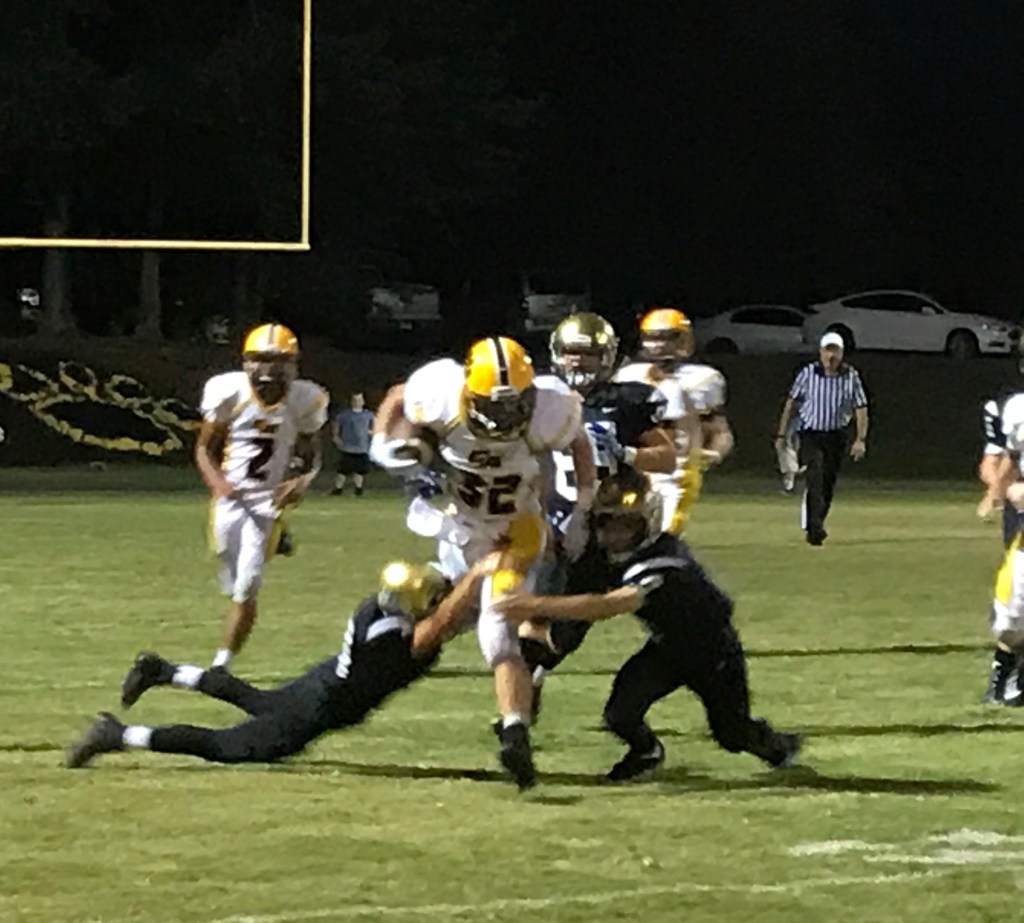 Baylor Pless (32) pushes through the Flint River defense to gain some yards during Friday night’s game.

WOODBURY- The Crisp Academy Wildcats traveled up to Woodbury last Friday for a game against Flint River Academy. Though CA saw some good plays, they lost the game in a 35-0 shutout.

Crisp Academy first received the ball but only saw some action on the third down. Quarterback Noah Mercer passed to Dylan Farmer for nine yards and a first down. Then a few plays later, CA punted to Flint River.

Flint River did not keep the ball much longer than Crisp Academy did before them, but instead earned a touchdown after a few minutes of play. The kick was successful, leaving the score 7-0 with 4:46 left in the first quarter. The drive for Crisp Academy included several tackles and one for a loss of four yards by Aubrey Brown.

The ball returned to the CA Wildcats for a short four plays and the ball was punted to their own 37-yard line. Being so close to the goal line, Flint River implemented a few successful plays for another touchdown and a kick for a 14-0 score.

On the first play after the next return, Mercer passed to Farmer for 13 yards. Crisp Academy progressed down the field to their 34-yard line, but the ball was intercepted and turned over to Flint River at the 1:35 mark. The quarter ended with the ball in Flint River’s possession, and soon into the second quarter they scored a touchdown and the point after.

With a score of 21-0, the ball turned back over to Flint River two plays after the ensuing return. On Crisp Academy’s 23-yard line, it only took Flint River a couple of small plays to make it back over the goal line. Flint River’s kicker then made the score 28-0 with the extra point.

CA got the ball back shortly after, but an interception switched possession back to Flint River and they earned another touchdown. The kick was made for the final score of the night at 35-0.

Lawrence ran for a 20-yard return, but for the rest of the half the ball switched between the two teams. The quarter ended with a 10-yard run by Mercer.

No more touchdowns were scored for the rest of the game, but the Crisp Academy defense and offense saw some bright spots. Austin Cobb, Billy Hardin, and Trey Williams each made tackles for a loss of yards. Cobb made several tackles on the night in his first game of the 2018 season after a successful heart surgery earlier this school year. Early in the third quarter, a pass from Mercer sent Williams on a 55-yard run.

A penalty on Flint River was called as the clock ran out of time in the fourth quarter, allowing Crisp Academy to make one final play. Mercer completed a pass to Williams who had set himself up in the end zone, but the referees called the throw out of bounds and sent Crisp home with no touchdowns.

This Friday, Crisp Academy plays their Homecoming game against Piedmont Academy. The CA coaches and players hope to have all of the injured players ready to play by next week. If all players were ready to play, then Crisp would be looking at a total of 23 players with eight seniors, including the two newcomers Cooper Folds and Will Hubbard. 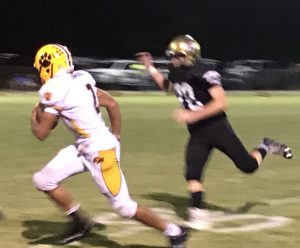 Dede Lawrence runs through the Flint River defense on a return for 20 yards.