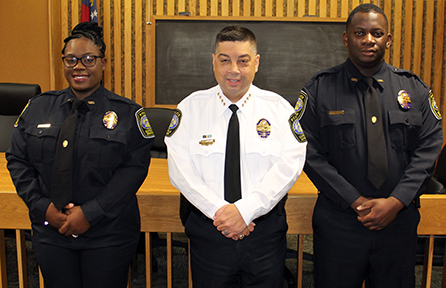 Makalah Harris and Travis Butts took the oath of office from Chief Rob Rodriguez before colleagues and family members pinned their badges on their uniforms.

Harris, from Hinesville, Ga., and Butts, a native of Cordele, recently graduated from the police academy in Tifton.

“The police academy is not a walk in the park,” Rodriguez said. “It is a very rigorous physical and academic program.”

Both Harris and Butts said they were very excited to start their service in Cordele. They will begin with eight weeks of field training with fellow officers before taking on solo duties.