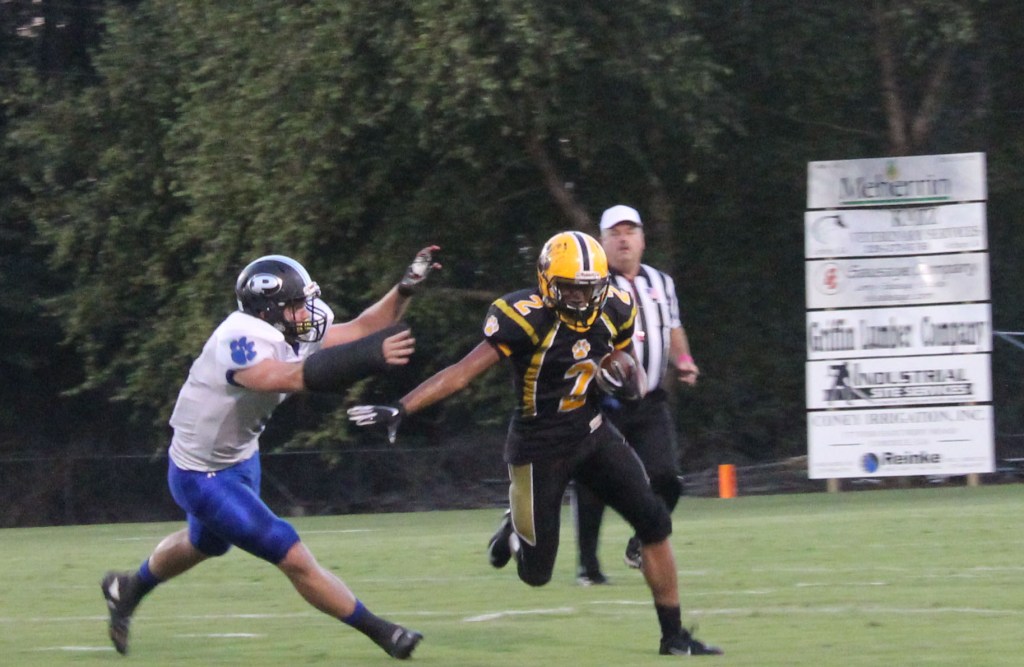 Dede Lawrence (2) uses a stiff arm to escape a Piedmont defender on a run in the first quarter of Friday night’s game. Lawrence was a big factor for the Wildcats in the 34-6 win.

CORDELE— The Crisp Academy Wildcats won their homecoming game on Friday night after using a 34 point second half outburst to down the Piedmont Academy Cougars 34-6. The teams were locked in a 0-0 stalemate at halftime, but the Wildcat offense ignited in the third quarter with some big plays to pull away from the Cougars.

Piedmont started the game with possession of the ball out near midfield after the opening kickoff, and put together a decent drive down into Wildcat territory. CA came up with a big play on fourth down and short to stop the drive, however, as several Wildcats were on hand to bring down the Piedmont running back just short of a first down.

A penalty backed the Wildcats up on their first offensive play of the night, and a couple of plays later the Cougars intercepted a deflected pass to take over in CA territory.

The teams later both turned the ball over on downs, and Piedmont muffed a punt return late in the first quarter that Dylan Farmer quickly scooped up to give CA the ball inside the Piedmont 20-yard line. The Cougars held the Wildcats out of the end zone on the possession, however, as the first quarter ended with no score.

The teams swapped punts over the next couple of drives, and Piedmont used a couple of big plays to get deep into Wildcat territory about halfway through the second quarter. Piedmont’s quarterback launched a pass into the end zone on a third and seven play from the CA 15-yard line, but Will Hubbard had the ball played perfectly and came up with an interception to give the Wildcat offense possession again.

Noah Mercer used a few throws to Trey Williams and Farmer on the next drive to get CA all the way down inside the Cougar 20 again, but Piedmont’s defense held them on a fourth down play with just under three minutes to go in the first half.

The Wildcats forced a quick punt on the ensuing Piedmont drive, but the Cougars intercepted a pass and ran out the remaining few seconds to send the teams into the halftime break with no points on the board.

The Wildcat offense came to life immediately after the halftime festivities as Griffin Gravitt threw a short pass to Dede Lawrence on the first offensive snap of the second half, and the receiver broke a tackle, followed his blocks, and used his speed to race into the end zone for the first touchdown of the night from 65 yards out. The two point conversion attempt was unsuccessful, but the Wildcats led 6-0 just 16 seconds into the second half.

Defense was the story for the remainder of the third quarter up until CA received a Piedmont punt near the 1:30 mark of the third quarter. Griffin Gravitt threw passes to Garrett Gravitt and Noah Mercer on the first three plays of the drive that moved the Wildcats from their own 35 down to Piedmont’s 40-yard line as time expired in the third quarter. Austin Cobb then made a couple of runs totaling 21 yards to get the Wildcats inside the Piedmont 20 yard line. A pass from Griffin Gravitt to Williams then set up first and goal from the nine-yard line, and Cobb ran in the second Wildcat touchdown of the night on third and goal from the 15. The two-point try was no good, but the Wildcats were up 12-0 with 10:24 to play in the game.

Piedmont came back with a long drive of their own to get their first points of the night. Cobb and Billy Hardin combined for a sack on the drive for the Wildcats but a roughing the passer call shortly after set up the Cougar score. The touchdown came on a 17-yard screen pass, but Hubbard came up with a big open field tackle to keep the two-point conversion attempt off the board. The Wildcats led 12-6 with 5:10 to play in the game.

Farmer returned the ensuing kickoff out to midfield, and Lawrence scored his second touchdown of the night, this time on a 50-yard run, on the very next play. The subsequent two-point attempt was successful as Griffin Gravitt threw to an open Williams for the score, and CA led 20-6 with just under five minutes to go in the contest.

Piedmont got big yardage on their next couple of plays in an attempt to get back in the game, but Lawrence came up with an interception in the end zone to give the Wildcats possession again.

Lawrence continued his big night on the very next play with a 70-yard run to set up the Wildcats inside the Piedmont 15-yard line. A run by Cobb got CA down near the goal line, and Williams ran in the touchdown on the next play from two yards out. Cobb added the two-point conversion for a 28-6 Wildcat lead with about three minutes to play in the contest.

Piedmont continued to try to move the ball to get back on the scoreboard, but the CA defensive line put heavy pressure on the quarterback who threw the ball into the waiting hands of Williams who took the interception around 30 yards back for a defensive touchdown. The score gave CA a 34-6 lead with about two and a half minutes to go in the game.

Piedmont made one last attempt at the end zone on the last drive of the night. The Cougars got down inside the CA 10-yard line with about a minute to play in the game, but the Wildcat defense came up with one final stop in the backfield as time expired, leaving the final score at 34-6 in favor of Crisp Academy.

Billy Hardin, Cobb, Lawrence, Hubbard, Cooper Folds, Williams and Aubrey Brown all led the charge with several stops in a big defensive performance from the Wildcats.

The win evened up Crisp Academy’s overall record at 3-3 on the season. They will play a region home game against Terrell Academy next Friday night before traveling to play Piedmont the following week to complete the home and home series between the two teams. 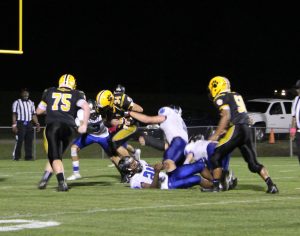 Crisp Academy senior Austin Cobb (34) fights through Piedmont defenders for some extra
yards during Friday night’s CA win. Flint Murray (75) and Luis Martinez are also pictured for CA as they look to help their teammate reach the end zone.