ROCHELLE— The Wilcox County softball Lady Patriots finished their regular season schedule on Thursday evening with a home region win over Clinch County 8-1. Wilcox celebrated their three seniors, JaMerical Marshall, Anna Tripp and Kaitlyn Harvey, prior to the game and the three capped off their final regular season contest by contributing in the win.

Wilcox scored at least one run in all of the first six innings on their way to the victory. They opened the scoring in the bottom of the first on a Carlee Walls double that scored Marshall. The Lady Patriots led 1-0 entering the second inning.

Wilcox added to the lead in the bottom half of the second after Chastity Stephens pitched a three up, three down top of the first. Jalynn Keene then led off the bottom of the second with a walk, and Harvey got on base with a sacrifice bunt try that led to a Clinch error. Lexie Anderson attempted to move both runners up with a sacrifice bunt and another Clinch error allowed Jalynn Keene to score. Marshall later picked up an RBI on a groundout that scored Harvey. The Lady Patriots led 3-0 at the end of the second inning.

Grace Keene scored the Wilcox run in the third inning after hitting a one out double and scoring on a Maci Martin groundout that led to another Clinch error for a 4-0 Patriot lead.

In the bottom of the fourth inning, Anderson reached base on a walk and later scored on a sacrifice fly from Marshall for a 5-0 score, and Jalynn Keene knocked in the fifth inning run with a home run to deep right field for a 6-0 lead.

Clinch County put their only run of the game on the board in the top of the sixth, but the Lady Patriots answered with two runs in the bottom half to close out the game.

Stephens and Marshall opened the inning with consecutive singles. Marshall later scored after a fielder’s choice groundout from Walls, who then scored on RBI groundout from Tripp for the 8-1 Wilcox lead.

Stephens finished the game off in the top of the seventh with a strikeout and two groundouts to put the finishing touches on the senior night win.

Marshall led the batting lineup with two hits, two RBIs and two runs scored. Fellow seniors Tripp (one RBI) and Harvey (one run scored) each also accounted for a run apiece. Walls had one hit, two RBIs and a run scored.

Stephens pitched all seven innings in the circle allowing only one run on four hits and one walk while striking out nine batters to help lead Wilcox to the win. All game stats were provided by Wilcox County softball’s GameChanger account.

The Lady Patriots finished the season with an 11-14 overall record after the win over Clinch. The GHSA class A playoff rankings are still to be finalized on Monday, but Wilcox had a ranking of 22 at the conclusion of Thursday’s games and they look certain to be in a playoff spot for this coming week. The top 24 ranked teams get into the state playoff bracket. 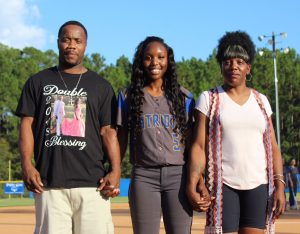 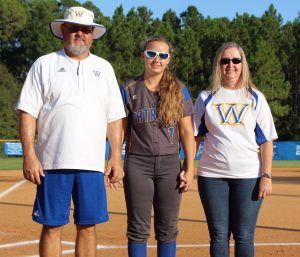 Wilcox County senior outfielder Anna Tripp is pictured with her parents during the Senior
Night activities prior to Thursday’s game. She had an RBI in the game. 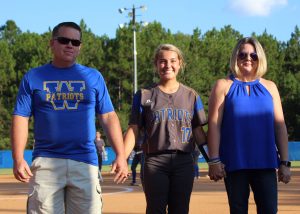 Wilcox Coutny senior infielder, Kaitlyn Harvey, is pictured with her parents prior to Thursday’s
win over Clinch County. She had one walk and a run scored in the contest.