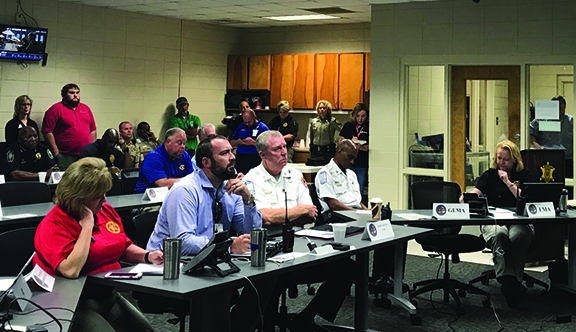 Public and private schools in Crisp County, along with Cordele campuses for South Georgia Technical College and Georgia Southwestern University, will be closed today and Thursday due to the threat of severe weather posed by Hurricane Michael.

Crisp County Sheriff and Crisp County Emergency Management Director Billy Hancock called a meeting of public safety, government, healthcare, education, and other officials to review the most recent weather reports and develop a safety plan should the hurricane hit Cordele at full force. As of press time the National Weather Service (NWS) predicts the eye of the hurricane will make landfall shortly after midnight Wednesday on the Florida Gulf coast near Panama City.

Hurricane Michael is expected to hit landfall with 100 mph winds that could be sustained as it moves inland. Crisp County Power Commission Director Steve Rentfrow said, “It won’t be the rains that hurt us most; it will be the winds.”

According to the most recent information provided by the National Weather Service as of press time, “Hurricane Michael is expected to make landfall across the Florida panhandle early on Wednesday. The remnants of Michael are expected to accelerate northeastward later on Wednesday and move across portions of central Georgia through early Thursday. It should be noted that impacts from heavy rain and potential tornadoes may precede the most significant winds with this system.

“During the height of the storm, winds of 25 to 40 mph will be possible with gusts as high as 60 mph across portions of central Georgia, with the strongest winds roughly south of Columbus and Macon. Widespread rainfall amounts of 3 to 5 inches are expected.”