Worry over losses dominate Perdue meeting with farmers in Cordele 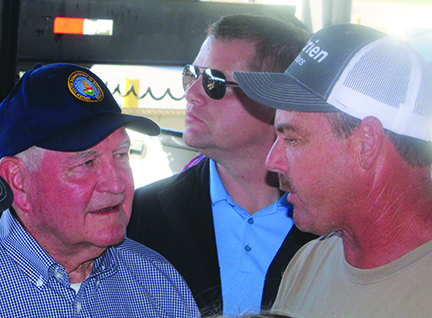 The day before U.S. Agriculture Secretary Sonny Perdue briefed President Donald Trump about farm losses caused by Hurricane Michael before the President toured the storm-stricken region on Monday, Perdue was in Cordele hearing directly from farmers.

Along with Georgia Commissioner of Agriculture Gary Black, the nation’s ag chief met with roughly 500 concerned farmers from all across south Georgia at the Cordele Farmers Market on Sunday.

Most of the concerns centered on not only plans for a federal disaster assistance program for farmers but also current crop insurance policies. Many pecan producers also expressed worry about a second straight year of losses caused by hurricanes.

“We’re here to hear from you. We’ve got a few things that can be done immediately.  We’ve got some intermediate solutions, and we’ve got some long-term solutions,” Perdue said before taking questions from the crowd. “There’s no real ‘silver bullet’ answers today. I think you all know that. I know I’ve never seen anything like this in Georgia.”

Many farmers said Hurricane Michael wiped out half of their crops. Others said they will lose as much as 85 percent. That’s complicated by the fact that, just days before the storm hit, the overall picture for farm production this year in Georgia was very strong.

“There’s certainly no way to compensate the bumper crops like many of you had this year,” Perdue said. “We had a good, good cotton crop, and it’s been blown away to who knows where.”

Lisa McKinley, a crop insurance agent from Pitts, told Perdue she had talked with many of her customers to learn about their concerns so she could share them at the meeting. “I’ll try to give you an idea of what’s on their minds,” she said.

“You’ve got the microphone, and you’re of the right gender to speak your mind,” Perdue said.

There’s a good possibility farmers who harvest their damaged crops will gather enough to exceed the levels required to trigger an insurance payout, McKinley said. She asked Perdue to consider supporting a disaster program that will not “punish” farmers who participate in the federal crop insurance program. In the past, any insurance payments were deducted from a farmer’s federal disaster relief payments.

“If we’re able to do that it has to be written into new legislation, the disaster legislation, in order to get that done. That’s one of the things that can be considered, but it cannot be done under the current law,” Perdue responded. “The problem with bumper crops is that there’s no way to buy crop insurance that’s going to cover above-average years.”

Other farmers also requested that federal disaster subsidies not be tied to crop insurance.

Perdue expressed skepticism about the idea of treating those who had not purchased crop insurance the same as those who had when it comes to federal disaster relief payments.

“I’m not sure I can commit to that, because why would I, as a farmer, ever buy crop insurance again?”

Not everyone was concerned about crop insurance and its effects on any potential federal disaster relief.

A pecan producer pointed out that it takes several years for new trees to begin putting on pecans, and that a huge number of trees were blown over as Hurricane Michael moved through the area. That means it might take up to eight years before pecan growers get any valuable production to compensate for losses from Hurricane Michael.

Perdue said it may be possible to model disaster relief for pecan producers after the plan for citrus farmers in Florida who were hit hard by hurricanes in the past. “We’ll have to look and see how to do that and that will probably have to be in the disaster program [which is written by Congress],” he said.

Later in the meeting Perdue said he was open to considering tree loss and the costs of replacing them as well as production losses that may persist while the new trees grow to maturity.

There were moments of poignancy during Sunday’s meeting, perhaps best expressed by Black, who has served as state agriculture commissioner since 2010.

Black urged those in attendance to turn to God and ask for His grace and strength. He led an emotional prayer that included a direct plea for the restoration of basic human needs including electricity and water as well as a plea for peace in the lives of farmers and people of all walks of life.