Cougars open region play with blowout win over Worth 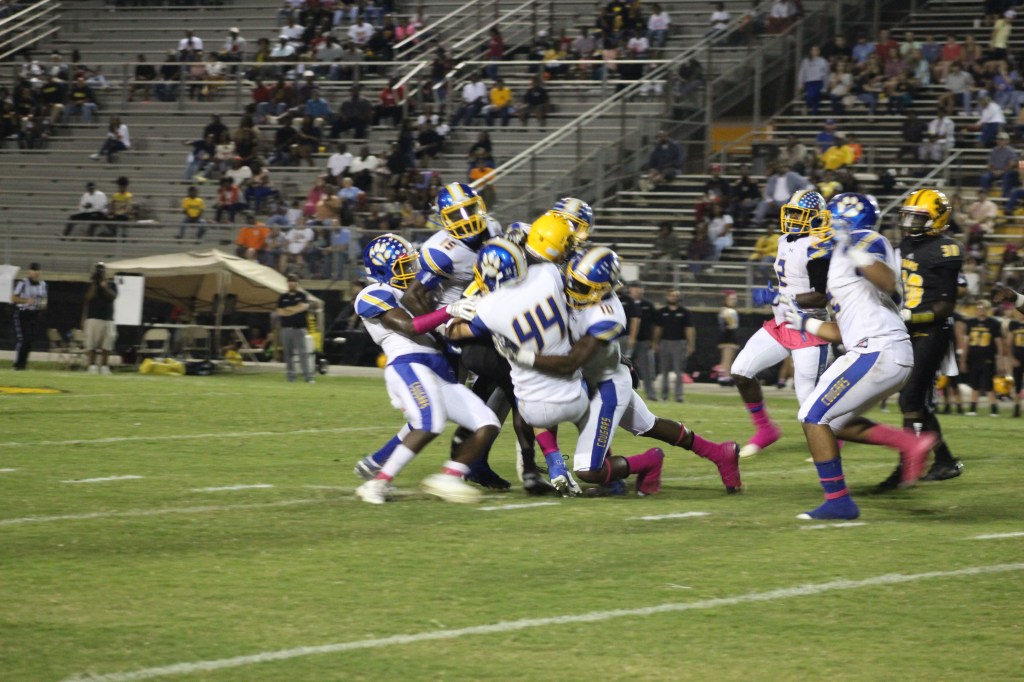 SYLVESTER— The Crisp County Cougars were finally able to get back on the field Friday night for their region opener against the Worth County Rams. Having not played the last two weeks due to an off week and Hurricane Michael moving last Friday’s scheduled contest to later in the season, the Cougars showed no signs of rust in a 35-0 shutout win over their rivals from Sylvester.

Worth kicked off to the Cougars to open the contest and Crisp started the first drive of the night at their own 29-yard line.

Jack Carter threw a 12-yard pass to AJ Lofton to open up the drive, then Lofton and Marquise Palmer swapped carries over the next several plays to get the Cougars deep into Ram territory. Palmer capped off the drive shortly after with a three-yard touchdown run on second and goal for the first points of the night. The point after attempt struck the upright and was no good, but the Cougars led 6-0 early in the first quarter.

Worth County took over at their own 21-yard line after the ensuing kickoff and they were quickly held to a punt just seven plays later. Several Crisp defensive players got in on the action on the drive. Sirad Bryant, Jaquan Bass, Nick Mercer, Chris Paul, and Trenton Richey all had tackles during the Worth possession.

The Cougar offense took over at their own 26-yard line after the punt and went back to work on a scoring drive that took the game into the second period.

Notable plays on the drive were a roughing the passer penalty on Worth, runs from Palmer and Anthony Lewis, and several pass completions from Lofton and Carter to receiver Eddie Reese. Worth eventually did enough to force a fourth down play, but Connor Richmond split the uprights with a field goal from about 30 yards out to extend the Crisp lead out to 9-0 with 11:13 to go in the second quarter.

Preston Lavant, Ahdarrious Gee, Kamron Moate and Jayren Fox all came up with stops on the subsequent Worth County drive before forcing an incomplete pass on fourth down to force a turnover on downs with six and a half minutes to play in the first half.

The Cougar offense stalled out near midfield on their following drive and punted back to Worth with just under three minutes to play in the first half. Bailey Barfield’s kick was then touched down inside the five-yard line to set the Rams up deep in their own territory.

The Crisp defense forced a quick punt after tackles from Richey and Gee, and the Cougar offense subsequently added one more score just before halftime when Lofton ran in a 17-yard score with 1:36 to play in the first half. The Cougars took a 16-0 lead into the halftime break after Richmond’s extra point.

The Rams received the second half kickoff and started a drive at their own 17-yard line but quickly were forced into a punting situation after Camion Snead made a couple of stops at the line of scrimmage. Lavant broke through the line on the ensuing punt attempt and got a hand on the ball for a blocked kick and Snead recovered the football at the four-yard line to set the Cougar offense up with a short field.

Palmer punched in a touchdown on the very next play, but an illegal procedure flag brought the play back. Lewis then ran the ball in from nine yards out on the next play for a 22-0 Crisp lead with 10 minutes to go in the third quarter.

The Cougar defense quickly forced another Worth punt, and the offense went right back to work on a 12-play scoring drive from inside the Crisp 15-yard line. Passes from Carter to Gaige Little, Paul, and Jacoby Harris mixed in with big runs from Palmer and Lewis set up the fourth Cougar touchdown of the night. The score came on a 12-yard pass from Carter to Fredrick Royal and the Cougars led 28-0 with just over two minutes remaining in the third quarter.

The Rams fumbled on their next drive with just over nine minutes to go in the fourth quarter and Lavant came up with the recovery to set up the final score of the night, this time on a three-yard run from Antorio Morgan with 1:37 to play in the game. Richmond hit the PAT to bring the final score out to 35-0.

Lavant, Gee, Moate, Richey, Paul, Fox, and Bryant all finished the night with several tackles apiece to lead the Cougar defense to the shutout victory.

The win makes Crisp County 1-0 in region play with a 5-3 overall record so far. Up next for the Cougars will be a home region game against the Cook County Hornets this coming Friday night. 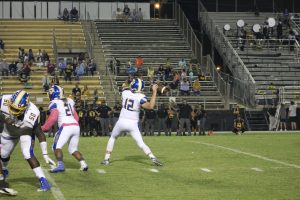 CCHS quarterback Jack Carter prepares to release a long pass down the field. 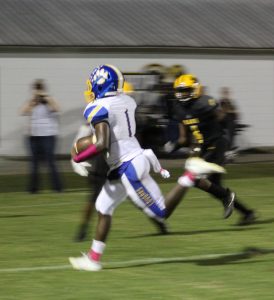 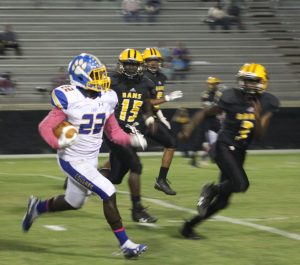 Crisp running back Marquise Palmer (22) gains yards as he avoids Worth County defenders in the 35-0 Cougar win. 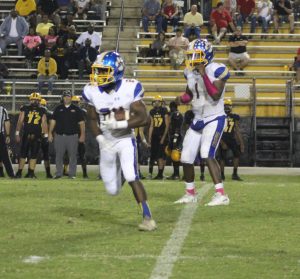 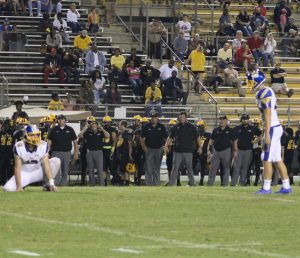