Lady Cougars fall to Brantley in second round of state 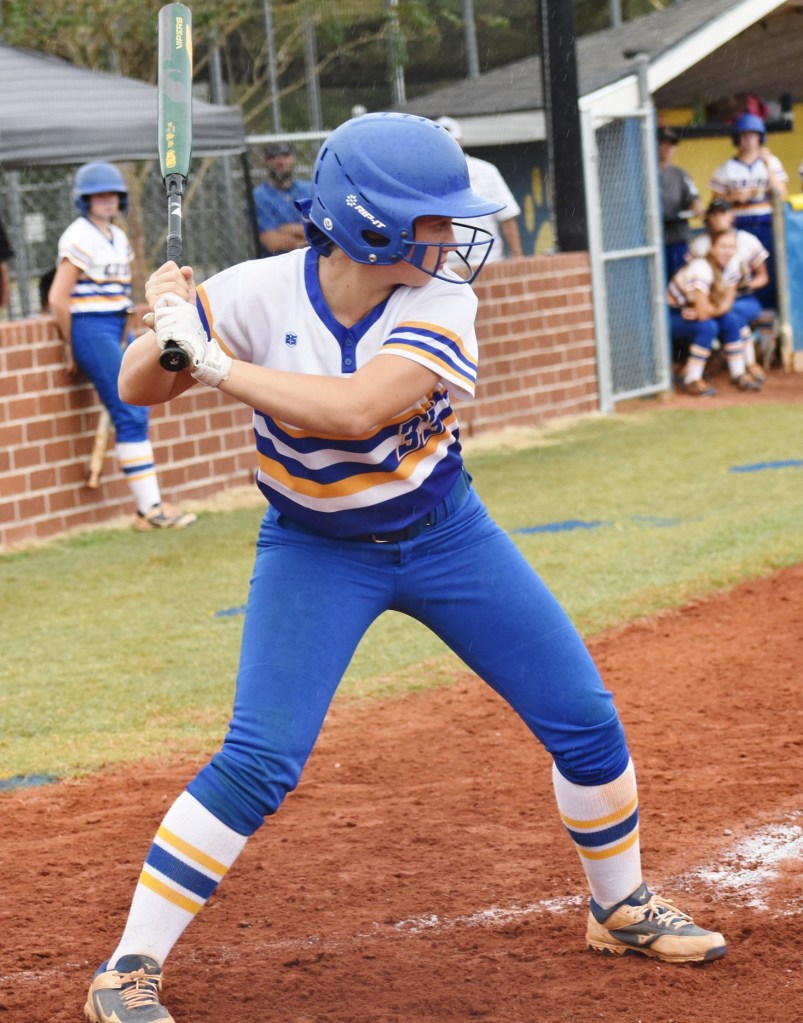 CORDELE—The Crisp County softball Lady Cougars saw their 2018 campaign come to an end on Wednesday night with a tough second round playoff series loss to the Brantley County Lady Herons (22-4).

The very competitive playoff series matchup saw the Lady Cougars, region 1-AAA champs, face off with Brantley County, who ended up as the runners-up in region 2-AAA after dropping a tiebreaker against Pierce County to enter the playoffs as a two seed. The result was an early playoff meeting between two teams that were expecting to be in the later rounds of the state tournament, and Brantley came out on top with wins of 7-3 and 5-3 on the night to eliminate the Lady Cougars.

Game one got out to a fast start early on and set the tone for an entertaining series between the two teams.

Brantley County got the leadoff runner on to start the contest with a walk, and a sacrifice bunt moved the runner over to third. Crisp pitcher, Rilee Duckworth, then struck out the next two Lady Heron batters to get the Cougars out of the early jam and allowed them to take the lead in the bottom half of the first.

Megan Bloodworth led off the bottom of the first with a walk and Kirin Webb then knocked a base hit into centerfield to put two Lady Cougars on base. Jo Brady later came up to bat with one out in the frame and promptly launched a three-run home run to deep right field for the first runs of the contest. Macy West later reached base in the inning after being hit by a pitch, but Brantley got out of the situation without giving up another one to leave the Crisp County lead at 3-0 entering the second inning.

Brantley threatened in the top of the second inning but a running catch in right field by Crisp County’s Shelbi Cobb and a pair of strikeouts by Duckworth left a Lady Heron base runner stranded at second base at the end of the frame.

Bloodworth hit a two-out triple in the bottom half of the second but Brantley County pitcher, Linde Lowther got an important out to keep the Lady Cougars from adding to the lead.

The two pitchers traded scoreless half innings in the third, and Brantley subsequently tied the score in the top of the fourth with RBI hits from Emma Raulerson and Jordan Harper. Brady tagged a Brantley base runner out at the plate on a throw from left field by Webb earlier in the inning that helped limit the damage. The teams went into the bottom half of the fourth tied at 3-3.

West drew a walk after being behind in the count 0-2 to start the frame for the Lady Cougars, and Peyton Bozeman moved her up to second using a sacrifice bunt. Brantley again got out of the runner in scoring position situation, however, after a couple of strikeouts from Lowther that ended the fourth inning.

Scoreless fifth and sixth innings left the result up to the decisive seventh inning, and the Lady Herons scored four runs in the top half. Brantley County batters Brooke Evans, Sydnie Middleton, Mollie Lee and Lowther each had RBIs in the inning. Brantley led 7-3 going into the bottom of the seventh.

Webb reached base on a hit by pitch with two outs in the inning, but the Lady Cougars were unable to extend the game and fell by 7-3 score line in game one.

The Brantley win in game one meant that the Lady Cougars were facing potential elimination from the playoffs in game two.

Crisp was designated as the away team for the second contest, so they started the game out with the bats and picked up the game’s first run in the first inning.

With one out in the top of the first, Webb reached base after being struck by a pitch and Riley Blampied followed with a single in the next at bat to give Crisp two runners on base. A passed ball moved both of the runners up a base, and a Brantley County error on the play allowed Webb to score for a 1-0 Lady Cougar lead, but Brantley tied the score in the bottom half on a steal of home.

Duckworth and Lowther each shut down their opposing lineups in scoreless second and third innings. The Cougar infield helped out by turning a big double play in the bottom of the third after Brady threw a base runner out on a sacrifice bunt attempt and Webb, covering third base from her left field position, then received a throw at third to tag the advancing runner out.

Olivia Taylor then got the Lady Cougars off to a good start in the top of the fourth inning with a base hit. West came up next and reached base on a sacrifice bunt attempt that led to an error. Bozeman followed up by reaching base on a dropped third strike to load up the bases, but the Lady Herons got out of the frame without allowing a run.

Brantley then took their first lead of the game in the bottom half of the fourth on a passed ball, making the score 2-1 going into the fifth inning.

The 2-1 lead was quickly turned around as Blampied tied the score with one out in the top half of the fifth inning with a long home run to deep left field. Brady hit a double off the fence in deep center in the next at bat and later scored on a passed ball for a 3-2 Crisp County lead.

The momentum once again shifted in the bottom half of the fifth as Brantley retook the lead with two runs on RBI doubles by Abby Willis and Madison Novak. Brantley County was in front 4-3 entering the sixth inning.

The Lady Cougars continued to threaten in the top of the sixth trailing by the one run. Cobb hit a one out single to left center field and Bloodworth reached base next after being hit by a pitch but Brantley County did just enough to prevent Crisp from scoring in the inning as a fly ball from Blampied was caught just shy of the right field fence.

Brantley County tacked on one more run in the bottom of the sixth and held Crisp County off in the top half of the seventh for the game two win by the final score of 5-3.

Blampied finished the contest with two hits and an RBI from the solo home run. Cobb, Taylor, Brady, Bloodworth and Ainslee Forsythe each had one hit in the game.

The Lady Cougars finished their 2018 season with an overall record of 21-5 and a region title to their credit.