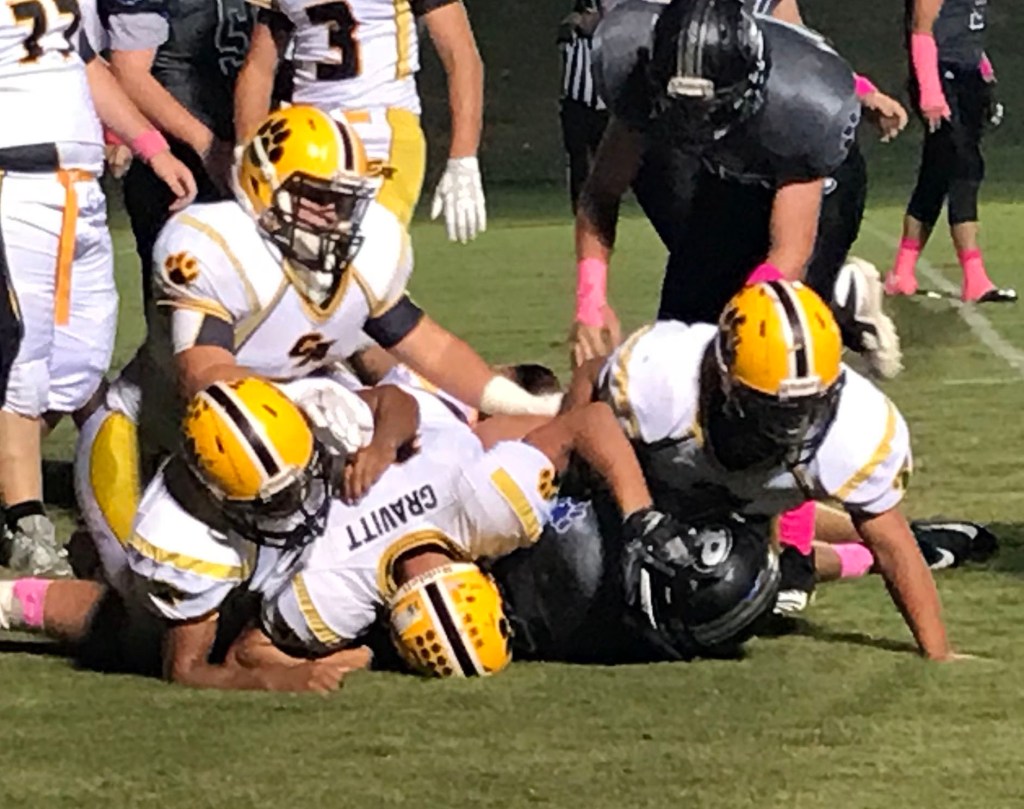 MONTICELLO- Crisp Academy’s game last Friday was a true-born nail biter with the lead switching back and forth between the two competitors.

CA lost an away game against Piedmont Academy, a team they had beaten only two weeks prior in Cordele. Towards the end, the game was so close it came down to which team had the ball last, and Piedmont came out on top by a score of 42-38.

Crisp Academy kicked off to Piedmont to start the contest. Piedmont returned the kick to the 38-yard line, and three subsequent tackles by Dede Lawrence only allowed them to advance to the 45-yard line. Tackles by a host of wildcats and another by Billy Hardin found Piedmont with a fourth down. But with only three yards left to go, Piedmont was able to break through for a first down, and a few plays later, a touchdown. With 7:40 left in the first quarter, Piedmont was up 7-0 after a successful kick.

CA then returned the next kickoff out to their own 31-yard line, and they were quickly brought to a third down at the 35-yard line. Lawrence broke through the Piedmont defense for the exact six yards needed for a Crisp first down. However, the first flag of many for Crisp put them at second and long later in the drive, and two incomplete passes forced the Wildcats to punt.

Piedmont held the ball for three minutes and 20 seconds for the next drive. In that span of time, the Cougars earned another touchdown and the extra point for a 14-0 lead.

Dylan Farmer gained about 20 yards on the following return and Trey Williams gained another six for Crisp to land on Piedmont’s 43-yard line before the first quarter ended.

Once the field was flipped, quarterback Griffin Gravitt earned some rushing yards and later threw a pass combined with some running from Farmer for 23 yards for two consecutive first downs. At this time, a clock malfunction prevented both teams from knowing the exact time left in the game so the referees had to keep track and notify the teams.

Just one play later, a pass from Gravitt to Noah Mercer set up a run of about 8 yards for a first down. Then pushed back to the 14-yard line, Williams burst through the line for Crisp’s first touchdown. After a successful two-point conversion, the Wildcats started to catch up with a score of 14-8 in favor of the home team.

Piedmont’s next drive was cut short after Hardin made a tackle for no gain, and Cooper Folds intercepted a pass and returned it eight yards to get to Piedmont’s 38-yard line.

A 16-yard pass from Gravitt to Williams brought a CA first down on the 22-yard line. Gravitt then passed the ball again, this time to Farmer for 20 yards. On the next play, Austin Cobb ran the ball into the endzone, and Lawrence scored the extra two points for the Crisp Academy 16-14 lead. The referees announced the time just before the touchdown at the 7:56 mark.

The ensuing return landed Piedmont at their own 33-yard line. Piedmont only made their way six yards down the field when Cobb tackled for no yards gained and Farmer knocked down their next pass. This series brought a Piedmont fourth down, and they were forced to punt the ball away.

Ultimately, the Wildcat’s next drive fell short and after only a few plays the ball was punted back to the Cougars.

The punt put the Cougars on their 28-yard line, but a big play allowed them to earn a touchdown with about three minutes left in the half. The successful two-point conversation gave the lead back to Piedmont at 22-16.

A few plays into the subsequent CA drive, an 11-yard pass from Gravitt to Farmer put the Wildcats on Piedmont’s 25-yard line. Then, Williams ran for a total of 16 yards to earn a first down on the nine-yard line. Things looked bleak for the Wildcats after two incomplete passes and a penalty pushed them back to second down and 20 yards to the goal. Gravitt then passed to Williams who tossed the ball to Hardin to get a third down with only ten yards to go. On the next play, Gravitt passed to Cobb who fumbled the ball, which was grabbed by a Piedmont defensive player who then also fumbled the ball. After the whole frustrating series, a Crisp Academy player picked up the second fumble. With a fourth down and ten yards to go, Williams miraculously ran in a touchdown to even the score, and Gravitt earned the extra two points to take back the lead at 24-22 in favor of the Wildcats.

With only 1:25 left in the half, Piedmont started their final drive of the second quarter, but Farmer intercepted the ball to switch possession back to Crisp before the clock ran out in the first half.

A couple of plays into the Wildcats’ first drive of the third quarter, Crisp found themselves at second and long. With 21 yards to go, Gravitt ran the ball 10 yards down the field, and on the next play, he passed the ball to Williams for 15 yards and a first down. This series set up a play for Lawrence who then ran in a touchdown from about 45 yards out. Williams added the two-point conversion, and he brought the score up to 32-22 with CA ahead.

Piedmont’s next drive led to another touchdown and the extra two points, making the score 32-30 in favor of the Wildcats.

Crisp’s next drive ultimately ended in a short matter of minutes. Out of that drive came a 20-yard run by Cobb and a nine-yard run by Gravitt.

Piedmont then stole the lead with another touchdown to make the score 36-32.

There was only 2:23 left in the third quarter when CA received the ball after the subsequent kickoff. The drive looked bleak for CA with a third down on their own 33-yard line, but a Piedmont penalty pulled the Wildcats up to the 50-yard line. Farmer made a big play from there, running in a 50-yard touchdown to bring the score to 38-36 in favor of Crisp Academy. This marked the end of the third.

After Piedmont’s last touchdown a few plays into the fourth quarter the final score on the night was 42-38.

For the rest of the quarter, Crisp kept possession of the ball. On second and fifteen yards to go, Gravitt made a 14-yard pass to Williams. This helped Crisp to get a first down on the next play with another run by Gravitt. Soon, the Wildcats were 20 yards away from a first down. But a pass from Gravitt to Mercer sent the receiver running down the field to land on the eight-yard line. A couple of Wildcat errors gave possession back to the Piedmont Cougars and the home team held onto the ball until time ran out in the fourth quarter to win by the score of 42-38.

This week the Wildcats host Fullington Academy on Thursday, October 25. This will be the first time in four years the two teams will compete in their Annual Roobin Classic since Crisp Academy switched back to 11-man football for this season.