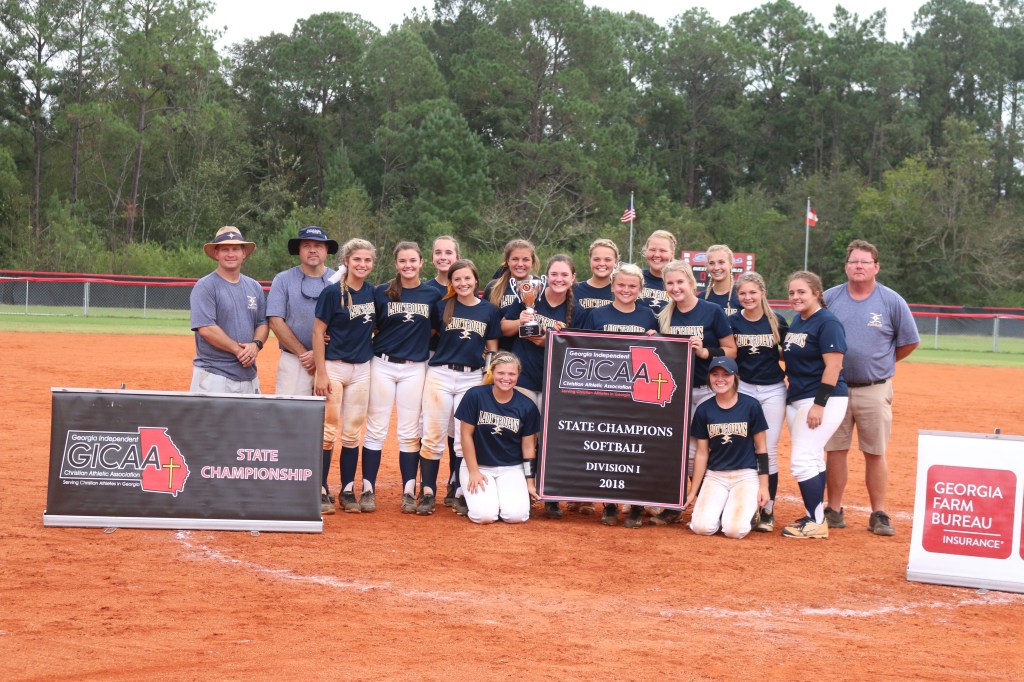 The two teams had previously matched up in last year’s edition of the championship series in Pinehurst, in which Fullington won the series two games to one. The location was different this time around, but the final result was the same as Fullington won the title with wins of 11-9 and 9-8.

Fullington jumped out to an early 5-1 lead by the end of the first inning in game one of the series.

Marley Jones led off with a hit for the Lady Trojans and scored on a base hit from Sarah Kate Wall in the next at bat. Ella McGalliard then hit a home run to deep center field to extend the lead out to 3-0. Carlee Roberts drew a walk later in the inning and scored the fourth run after a Maddie McLeod hit. Lauren Rucker followed with a double, and courtesy runner Emma Sanders scored the final first inning run for the Lady Trojans on an RBI groundout from Claire Thompson for a 5-0 lead after the top half of the frame.

David Emanuel pitcher Carli Patterson hit a home run in the bottom half of the inning to make the score 5-1 in favor of Fullington going into the second inning.

Fullington added four runs to the lead in the top half of third inning after the two teams played a scoreless second frame.

Parker Wall led off the top of the third with a single, and Roberts next reached on an error after putting the ball in play on the infield. Thompson came up later in the inning with two outs and hit a groundball that led to another error that allowed both runners to score for a 7-1 lead. Maggie Rogers came up with a walk to extend the inning and a hit from Jones plated the next two runs for a 9-1 Fullington lead.

RBIs from DEA’s Sara Perkins, Jaylin Hall and Jordyn Bell totaled three runs for the Lady Eagles in the bottom half of the inning to make the score 9-4 in favor of Fullington heading into the fourth frame.

McGalliard led off the top of the fourth with her second home run of the game to extend the lead out to 10-4.

Roberts reached base on a DEA error with one out in the top of the seventh and later scored Fullington’s eleventh run of the game on another error. McGalliard then got the final three outs in the circle for the Lady Trojans to close down the game one win.

Game two was a very even matchup that saw DEA lead for the majority of the contest up until Fullington took the win in walk-off fashion.

Bell and Findley Griner picked up RBIs in the top of the first inning to give the Lady Eagles the first two runs of the game.

The Lady Trojans quickly tied the score back up in the bottom half of the frame. Jones led off the inning with a single, and Sarah Kate Wall reached on an error in the next at bat. McGalliard then drove in both with an RBI double to tie things up at 2-2.

DEA retook the lead at 5-2 in the top of the second inning after RBI hits from Perkins, Bell and Patterson.

The Lady Trojans got a run back in the bottom half of the second after Maggie Rogers hit a two out single and later scored on an Eagle error. Fullington trailed 5-3 after two innings of play.

Fullington cut into the lead with another run in the bottom of the third. Parker Wall and Roberts opened the inning with consecutive hits and Wall later scored on an error for the fourth Trojan run of the contest.

DEA later jumped back in front 7-4 in the top half of the fourth inning on a two-run double from Bell.

The Lady Trojans responded with a run in the bottom half after Maggie Rogers doubled and later scored on an error to cut DEA’s lead to 7-5 entering the fifth frame.

David Emanuel maintained the 7-5 advantage up until the sixth inning when Fullington cut the deficit to one run. Maggie Rogers was again the run scorer after picking up another hit and reaching home plate on an RBI groundout from Sarah Kate Wall. DEA held onto a 7-6 lead going into the seventh inning.

The Lady Eagles picked up an insurance run in the top half of the seventh on an RBI hit from Alaina Strange for an 8-6 lead. The Lady Trojans had no intentions of playing an extra game to determine the series, however, as they scored three runs in the bottom half for a walk-off win.

Roberts and McLeod hit back-to-back singles to get the rally started, and a two-run double from Rucker tied the score at 8-8. Rucker later stole third base, leaving the game up to Mackenzie Rogers, who delivered the game-winning RBI on a sacrifice fly to centerfield allowing Rucker to reach home plate for a 9-8 score line wrapping up a second straight state title campaign for the Lady Trojans.

“Mackenzie Rogers was my Flex player, and I put her in to hit for the Designated Player position. Her senior leadership is what helped us win the second game there because she hit a sac fly to right centerfield that scored the winning run,” said Fullington Head Coach John Wall. “She stepped up, and I was really proud of her coming in cold off the bench to the plate and doing the job. She has always been the off the field leader, but she really stepped up and was the on the field leader in that last at bat.”

Sarah Kate Wall came up with the win in the circle in game two after relieving McGalliard in the top of the seventh inning.

The Lady Trojans finished the season with a 22-6 overall record to their credit on their way to their second straight state championship.

“I am really proud of the girls, the way they never gave up when they were down in the second game,” Wall added. “They kept battling and that has pretty much been their motto the whole year, no matter 10 runs up or 10 runs down they fight until the end. They stepped up and played as a team.” 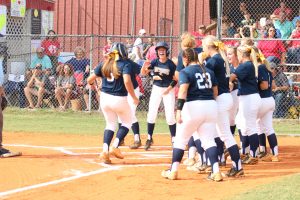 Fullington infielder Ella McGalliard is greeted by her teammates as she completes her trip around the bases after hitting one of her two home runs during the 11-9 win in game one of the state championship series. (Photo by Bonnie Hauesler) 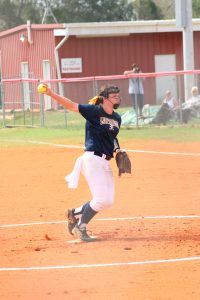 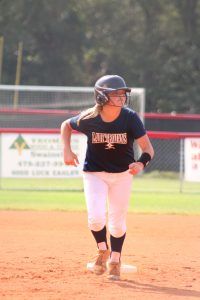