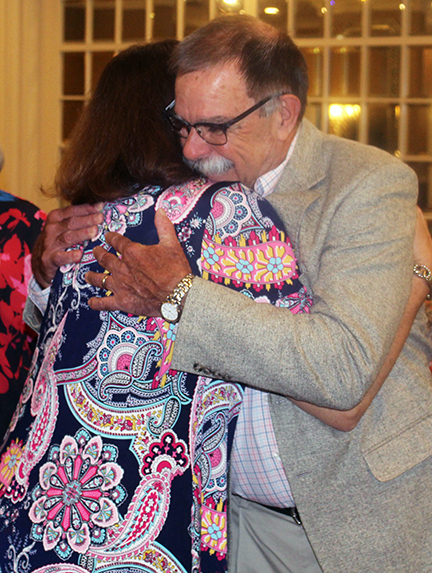 Dr. David Duvall greets a well-wisher with a hug during a recent retirement reception for the long-time local physician.

Dr. David Duvall practiced medicine in Cordele for his entire career, earning the love and respect of patients, colleagues, and neighbors.

When Dr. David Duvall finished his residency at Emory University many moons ago, it turned out that it wasn’t all that hard to convince him to come to Cordele to practice.

“We just liked the people. We felt a connection. And the hospital authority seemed really motivated and interested – along with the doctors who were practicing here,” said Duvall, who officially retires at the end of the month.

“There were a lot of places where the established doctors didn’t want any new blood to come in because they might be threatened, but that wasn’t the case in Cordele. They wanted to see what procedures were being taught and being practiced, which was unique in my experience,” he said.

The hands and minds running Crisp Regional Hospital at the time were unique, too.

“We had a really visionary administrator and board, which was very instrumental in me staying here as long as I have. When I first came we were in the old hospital, and we had just put in an ICU. It was the first modern thing in the building. And then they had the foresight a few years later to build the new hospital. They kept improving it and keeping it up to date,” he said.

Of course, that doesn’t mean Duvall hasn’t forgotten the ‘old-school’ training he received as a medical student at Emory.

“We had a really wonderful internal medicine program at Emory, and it molded how I practice medicine. It was very clinically oriented. We spent a lot of time hands-on with the patients. I’ve always felt the physical exam is the most high-yield, cost-effective way to treat patients,” Duvall said. “I’m not knocking technology, because that helps us a lot, but it’s not a substitute for the personal interaction with a patient.”

Duvall said he believes there’s as much art to the practice of medicine as there is science.

“It’s really both because there are sometimes a lot of ways to treat the same condition, but the art of it is how you interact with the patient and the confidence they have in you and your advice,” he said.

But he credits his upbringing with helping establish his genuine care for both his patients and his community.

“It’s probably because of my growing up in a Christian home with loving parents,” Duvall said. “It makes you love others and be concerned for them and do your best for them.”

Duvall grew up the son of missionaries, and he spent much of his early life in west Africa.

“We were in a really remote area with jungles all around our mission compound, and not a lot of people. I was just used to a simple lifestyle, not a lot of traffic and commotion, and it just seemed to suit my personality,” Duvall said.

He will likely see a lot more traffic in his retirement days, as he and his wife Cynthia are looking forward to spending a lot of time with their ten grandchildren, who are spread across Rome, Macon, and Chattanooga.

Or he may just roam his home in Crisp County, where he enjoys tending his garden and the occasional hunting or fishing outing. Plus, he’s grateful to be able to spend more time with Cynthia.

“We met at the college Baptist student center, fell in love and dated through college and married after I graduated. She’s been so supportive of what I’ve been able to do here. She’s put up with a lot, got ignored a lot of times, but she’s been really good,” Duvall said.