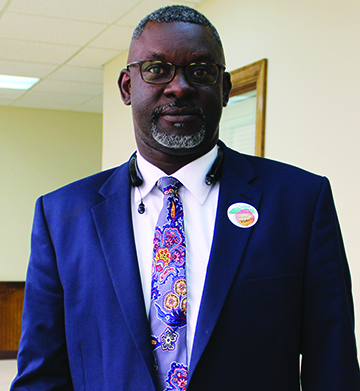 Authur James Nance, the vice chairman of the Crisp County Board of Commissioners, reported to the Peach County Sheriff’s Office on Tuesday morning for booking on misdemeanor charges of pandering and solicitation of sodomy.

Nance was able to post bond shortly after he was processed at the Peach County jail. The bail amount had not been determined at press time.

Despite spending most of his morning dealing with his arrest, the county commission vice-chair was present for a called meeting of the Crisp County Commission where there was a brief discussion about the county’s revolving loan fund.

The two charges against Nance, which were announced by Macon District Attorney David Cooke last week, stem from a months-long investigation into financial wrongdoing and sexual misconduct at Fort Valley State University. Investigators uncovered allegations of fiduciary theft when Alecia Jeanetta Johnson, “together with Ashlei Cason conspired to take scholarship money that had been given to [an FVSU student] in the form of a book scholarship,” according to Johnson’s arrest warrant.

Johnson served as an executive assistant to the president of Fort Valley State University before the allegations against her came to light. It is not immediately known who Cason is.

Cason’s name and email address appear on FVSU’s online staff directory, but a spokesperson for the university was not able to confirm whether or not she is currently employed there. She is not charged with a crime.

That’s where Nance and five other men fit in the investigation.

According to Nance’s arrest warrants, prosecutors claim he “did in fact commit solicitation of sodomy when the accused solicited persons, Alecia Johnson and Ashlei Cason, to perform or submit to an act of sodomy.”

It is further alleged that Nance, “did in fact commit pandering with the accused solicited persons, Alecia Johnson and Ashlei Cason, to perform an act of prostitution in his own behalf.”

The other five men also charged with pandering and solicitation of sodomy are Ernest Harvey, 47; Kenneth Howard, 56; Ryan Jenkins, 35; Charles Jones, 57, of Fort Valley; and Devontae Little, 26, of Warner Robins.

Howard is currently employed as the city manager of Hinesville. Harvey is an assistant principal for Huntington Middle School in Houston County. Jones is a former director of corporate and government relations and a legal advisor for FVSU.

The crux of the district attorney’s case against Nance and the other men is that Johnson offered to provide a prostitute to them. A trial date has not been set.

Nance will likely not be removed from the Commission since the charges against him are misdemeanors. He has not expressed an intent to resign.