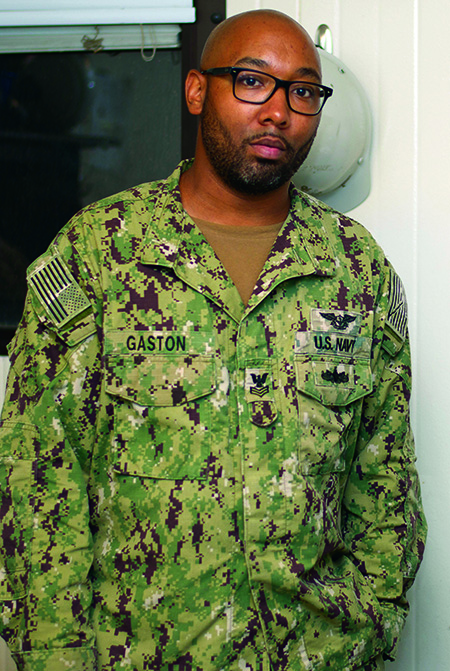 NEWPORT NEWS, Va. – A 2001 Crisp County High School graduate and Cordele, Georgia, native currently serves aboard one of the U.S. Navy’s most valuable and capable warships, one that can carry 5,000 sailors and more than 70 warplanes anywhere in the world to defend America.

A Navy aviation boatswain’s mate (equipment) is responsible for launching and recovering fixed wing aircraft from an aircraft carrier and all associated maintenance on the equipment.

“The crew I work with and the excitement of trouble shooting are my favorite aspects of my job,” Gaston said. “In my opinion, aviation boatswain’s mates are some of the most fun people to be around.”

Gaston credits success in the Navy to many of the lessons learned in Cordele.

“Growing up in my hometown was an experience like no other,” Gaston said. “Nothing was given and you had to work hard to get what you wanted. I would say my hard work and dedication to never give up has helped me succeed in the Navy.”

“Our ship’s motto is the Spirit of Freedom, and this motto is evidenced daily in the actions and character of our sailors,” said Capt. Glenn Jamison, commanding officer of USS George Washington. “The work they are involved in today is difficult, but is vital to national security, to our maritime strategy, and to our ability to provide compassion and aid when and where needed. I am always impressed by the level of professionalism and expertise demonstrated by the men and women who serve aboard George Washington.”

Sailors’ jobs are highly varied aboard George Washington. The crew of approximately 2,800 sailors keeps all parts of the aircraft carrier running smoothly, including everything from launching and recovering aircraft to operating its nuclear propulsion plant.

Another 2,000 sailors are assigned to the ship’s embarked air wing, flying and maintaining aircraft aboard the ship.

“The most rewarding part of being on a carrier has to be the opportunities it offers to grow as a sailor, regardless of your rank,” Gaston said.

Though there are many ways for sailors to earn distinction in their command, community, and career, Gaston is most proud of being promoted in rank to petty officer first class.

“I was a second class petty officer for so long that I didn’t think that making first was in God’s plan for me, but due to my hard work, I made it,” Gaston said.

As a member of one of the U.S. Navy’s most relied upon assets, Gaston and other sailors know they are part of a legacy that will last beyond their lifetimes, one that will provide a critical component of the Navy the nation needs.

“Serving in the Navy means a lot to me,” Gaston added. “Besides serving my country, it shows my daughters, Jordan and Jailynn, that their pops is doing something positive and hopefully one day my service to our country will inspire them to do something positive as well.”

Often described by senior defense officials and policy makers as “4.5 acres of sovereign American territory,” aircraft carriers are the centerpiece of America’s naval forces. In times of crisis, the first question leaders ask is: “Where are the carriers?” Navy officials state that the presence of an aircraft carrier has frequently deterred potential adversaries from striking against U.S. interests.

George Washington is presently undergoing a four-year refueling complex overhaul (RCOH) at Newport News Shipbuilding, a process that includes refueling the ship’s nuclear reactors and modernizing more than 2,300 compartments and hundreds of systems. The carrier is expected to leave the shipyard in 2021 and return to Yokosuka, Japan, as the Navy’s only forward-deployed aircraft carrier.

While underway, the ship carries more than 70 jets, helicopters, and other aircraft, all of which take off from and land on the carrier’s 4.5-acre flight deck. Four powerful catapults launch aircraft off the bow of the ship. After lowering a tail hook that protrudes from the rear of the airframe, fixed-wing aircraft land by snagging a steel cable called an arresting wire.

George Washington is currently one of 11 aircraft carriers in the U.S. Navy. It is the sixth Nimitz-class carrier and the fourth Navy vessel named after the first president of the United States. Measuring nearly 1,100 feet from bow to stern on the flight deck, the ship is longer than three football fields. It is 257 feet wide, 244 feet high and weighs nearly 100,000 tons.