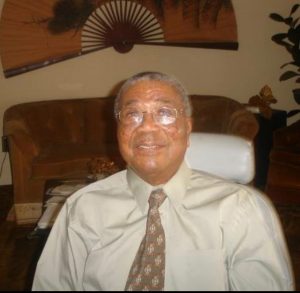 On Wednesday, October 25, 2018, Rogers Franklin Brown entered his final home of eternal peace, to be with his devoted wife, the love of his life, Arlean (Lean) Dukes Brown. Rogers was born in Hatley, Georgia, on Christmas Day, 1926. He was the eighth child born into the great Dynasty of Daniel Sr. and Clifford Vance Brown. Rogers was preceded in death by his parents, and all nine of his siblings – five sisters; Bertha Dennard, Florence Taylor, Ida Hamilton, Ora Saddler and Helen Didley, four brothers; Benjamin, Daniel Jr., Chester and James.

Rog, as Lean affectionately called him, married his wife in 1953. In 1990, Lean became ill, where it was suggested that she only had three months to live. Rog was so involved in every step of her care, where many of her medical caregivers began to believe that Rog was a doctor himself. Soon, Rog began receiving mail addressed to Dr. Rogers Brown, from places like the Mayo Clinic. Lean lost her courageous battle with Cancer in 1994. Rog never remarried. He often said with supreme pride, that his wife lived an exemplary life, raising three successful “good girls”, by example.

Rog enjoyed a well-rounded education. He loved the power of knowledge. Rog studied many religions, and he loved to debate them. He attended the Gillespie Boarding School as a youth. He served his country while in the Army from 1946 through 1950, where he improved his skills as a certified mechanic. After coming to Michigan in 1950, his education included Wayne State university. Rog was a jack of all trades. His talents also included being a journeyman carpenter, and a licensed inspector. His wife was especially excited when he built the addition to their Detroit home. He was an auto mechanic, fixing cars for many of his family and friends. Rog found his greatest passion in being an Administrator for Highland Park, Michigan, Schools, where he worked until his retirement in 1985. When driving his family through Highland Park, he pointed to many buildings exclaiming with pride, I built that. Rog went on to build structures across that country, including developments in Africa. He had charisma, along with curly brown hair, blue eyes, and the ‘gift of gab’. Some said he had more fans than Elvis.

Like his wife, Rog experienced Cancer himself, when he was diagnosed with the disease in 1985. He had Bone Cancer. Though he survived what was experimental surgery at the time, he never regained the use of his right leg. Rog remained independent, often rejecting assistance from his family. He handled his new reality of pain and disability with courage and grace. Refusing pain pills, Rog said he made pain his friend. He continued to drive across the country, alone, until six months before his death. He was a true workaholic. When he was forced to retire due to his illness, God had a special plan for what to do with his time as a retiree. Her name was Dawn Arlean Gilliam. For anyone that saw Rog during the 1980s and 1990s, they usually saw his granddaughter and best friend, Dawn, by his side. When mentioned above that they raised three girls, Dawn had become their third daughter. Dawn soon understood that she could get anything she wanted from her grandfathers, as both competed for her time. Dawn’s parents enjoyed it most, because they never had to ask for a babysitter. As the only grandchild of all four of her grandparents – until the Brannon Twins were born 23 years later – Dawn dreamed of buying a big house where her grandparents would live with her, and she would take great care of them. Sadly, Rog was the only grandparent that survived long enough to make this dream come true. Rog lived with Dawn and her husband, Eugene, for the last eight years of his life.