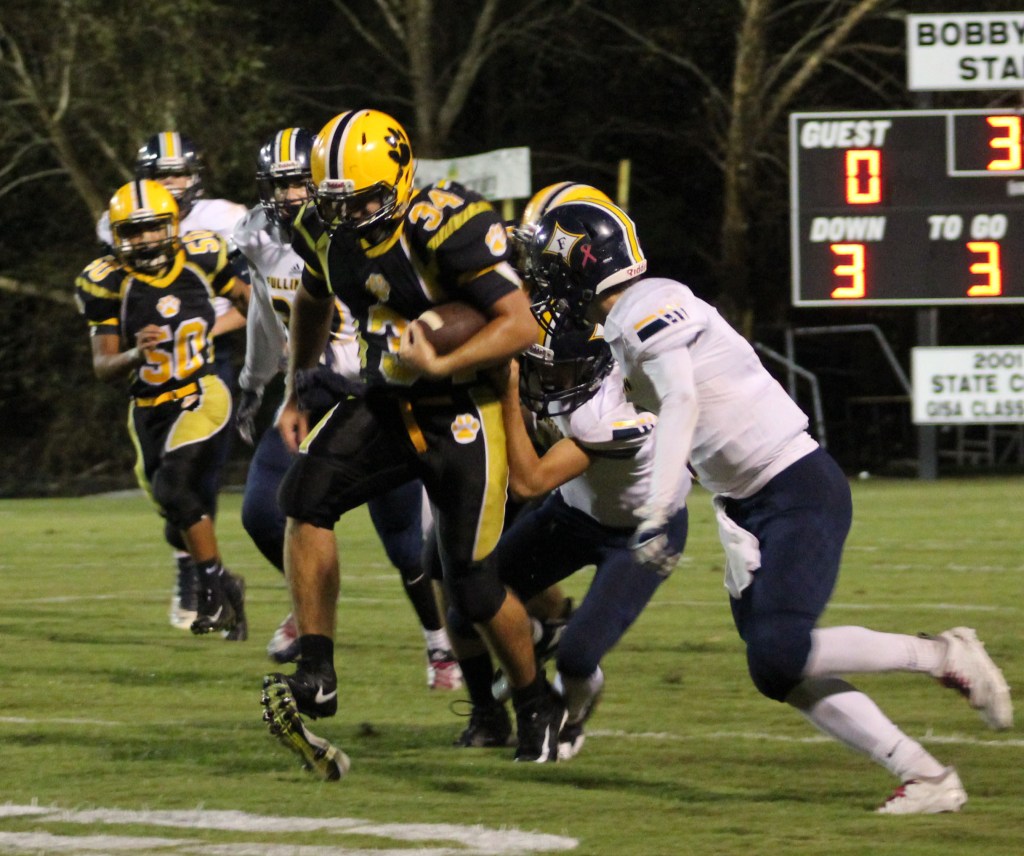 Crisp Academy senior Austin Cobb (34) secures the ball after a catch as Fullington defenders attempt to bring him down during Thursday night’s game.

CORDELE- For the first time in four years, Crisp Academy and Fullington Academy found themselves able to compete in their annual football competition Thursday night. The Roobin Classic was established to honor the late Coach Mike Roobin who coached both sides of the rival football teams in his career. The result of this season’s edition of the game was a 38-0 shutout in favor of the Wildcats, giving Crisp Academy the coveted Roobin Classic Trophy in the contest that was also their senior night game.

On the opening kickoff, Fullington’s Chase Smith ran the ball about 15 yards to their 29-yard line. A few minutes into the drive, Fullington was forced to punt the ball on the fourth down play.

The ball landed on Crisp Academy’s 49-yard line, and this return led the way for Crisp’s first touchdown.

Dede Lawrence ran the ball on two consecutive plays for 25 yards total and a first down at Fullington’s 32-yard line. The play after, Austin Cobb was handed the ball and he ran for 18 yards to land on the nine-yard line. Lawrence next ran for a seven-yard play to bring the Wildcats that much closer to the goal line. Fullington was able to push back the Wildcats a little when Corbin Hedden tackled a Wildcat runner for a loss of yards. The Crisp Academy Wildcats persevered, and Griffin Gravitt passed the ball to Baylor Pless who was waiting in the end zone for a touchdown. With 7:10 left in the first quarter, Lawrence ran in the ball for the extra two points, making the score 8-0.

For the Trojans, Nelson Clements ran the ball for 11 yards on the ensuing kickoff return to land on Fullington’s 46-yard line. Because of a Fullington error, the Trojans were quickly pushed back to fourth and long. So, Fullington punted possession back over to Crisp Academy.

To earn a first down a couple of plays into the ensuing Wildcat drive, Gravitt faked a handoff to Lawrence and tossed the ball over to Cobb who then ran 19 yards down the field. After an eight-yard run by Pless, Lawrence ran the ball on three consecutive plays, including a touchdown run of about 22 yards. For the two-point conversion, Gravitt threw the ball to Pless to make the score 16-0 with one minute left in the quarter.

Shortly into the Trojans’ subsequent drive and with only seven seconds left in the first quarter, Pless intercepted a pass to switch possession back over to CA.

At the beginning of the second quarter, Gravitt threw a 19-yard pass to Trey Williams to bring the ball to Fullington’s 24-yard line. Lawrence made way down the field by running 14 yards and, on the next play, six yards to reach the four-yard line. A handoff to Cobb led to another Wildcat touchdown. The two-point conversion pass attempt intended for Pless was defended by Fullington’s Caleb Kehayes and Brooks Hendrix, but with the successful touchdown, the score was 22-0 in favor of the Cats.

Fullington’s Jack McLeod next ran for a 25-yard return to land on the Trojan 35-yard line. However, the Trojans were unable to earn a first down, so they punted the ball over to the Wildcats.

On the punt, Dylan Farmer ran the ball down the field for about 20 yards to land back at Fullington’s 35-yard line. A flag on Crisp Academy pushed them back to their own 46-yard line, then Gravitt passed the ball to Pless for a 46-yard play to earn a touchdown. Lawrence rushed for the two-point conversion, making the score 30-0.

An approximately two minute drive with no first downs caused the Trojans to decide to punt the ball to Crisp Academy once more.

On the first play of the next Wildcat drive, Pless made a six-yard run, but was hit hard by Fullington’s Hunter Hughes to end the play. Then Lawrence rushed for 24 yards to earn CA a first down at the FA 12-yard line. After CA was pushed back because of a flag, Fullington’s Trey Miller tackled a Wildcat player to set up a third down with 15 yards to go. But Lawrence made another big play by rushing up the field for 15 yards before being stopped on the two-yard line. Williams then ran the ball in for Crisp Academy’s final touchdown of the contest. Gravitt subsequently ran in the ball for the extra two points. This play put the last points of the night up on the scoreboard, as the final score was 38-0.

Fullington’s last drive of the first half was cut short by Will Hubbard who knocked down a pass intended for a Trojan player. The fourth down came and possession switched back over to CA to end the second quarter.

For the rest of the night, the ball switched between the two teams, making for some good plays on each side. After a loss of five yards, a knocked down pass by Pless kept the Trojans with 15 yards to go for their entire drive. But on Crisp’s drive, a tackle by Clements for a loss of four yards, a knocked down pass by Miller, and a tackle for no yards gained by Rivers Smith switched the ball back to Fullington. This marked the end of the third quarter.

Both teams play next week for their final regular season games, Crisp Academy in Camilla against Westwood and Fullington in Valdosta against Georgia Christian. 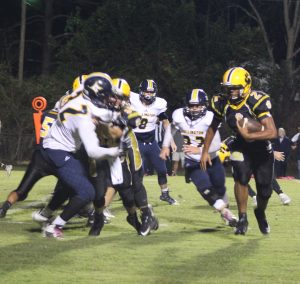 Crisp Academy senior Dede Lawrance (2) runs the ball as Fullington defenders Trey Miller (32) and Chase Smith (22) look to get in position to make a tackle. 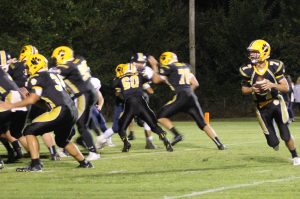 Crisp Academy quarterback Griffin Gravitt (7) rolls out as he scans the field looking for an open receiver to throw to. Austin Cobb (34), Dillon Easterlin (60), Jacob Gravitt (70) and other teammates are all pictured blocking for their quarterback.