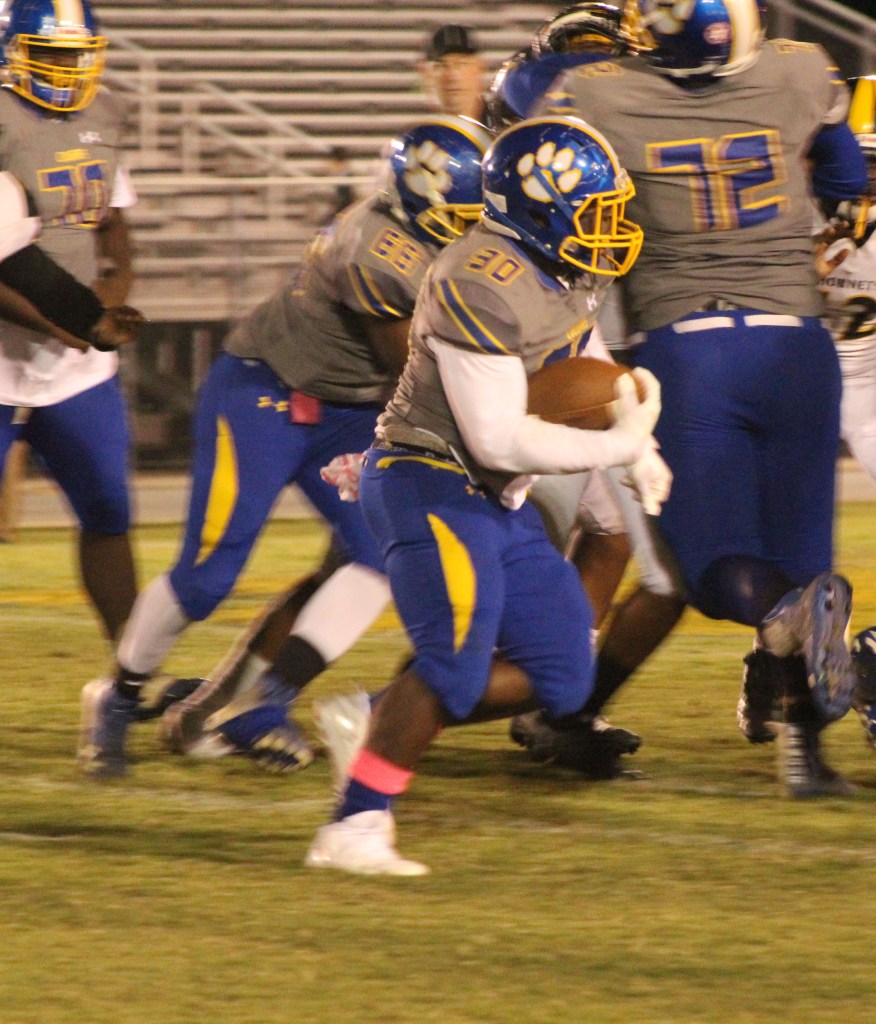 CORDELE- The Crisp County Cougars extended their win streak to five games with a region win over the Cook Hornets on Friday night. The Cougars got out to a fast start as they jumped out to an early 21-0 lead on their way to the 28-6 victory over their region rivals from Adel.

Crisp County’s Jaylin Epps ran the opening kickoff out near the Cougar 35- yard line to start the contest and it took the offense just three plays to score the first points of the night.

AJ Lofton ran the ball on the first play, and Fredrick Royal caught a pass for another quick pickup on the second play of the drive to get Crisp out near midfield. Marquise Palmer then finished the drive off with a long touchdown run to put Crisp County in front. Connor Richmond hit the point after attempt for a 7-0 lead less than a minute into the game.

The Cougar defense held Cook County to a quick punt on the first Hornet drive of the night. Ahdarrious Gee and Colton Oliver both made stops at the line of scrimmage to help halt the Cook drive.

The Crisp offense started near midfield on the ensuing drive and quickly added to their lead.

Lofton threw passes to Tubby Spivey and Jy’Nick Mainor, and then added a couple of runs to get the Cougars down inside the Hornet 10-yard line. Palmer then picked up his second score of the night with an eight-yard touchdown run. Richmond hit the extra point for a 14-0 Crisp lead at the 6:26 mark of the first quarter.

Cook took the subsequent kickoff return out to their 41-yard line for good field position, but they were held to a turnover on downs at midfield to give the Crisp offense possession once again. Gee and Kamron Moate were credited with tackles on the Cook drive, and Preston Lavant batted a pass down at the line of scrimmage on a second down play.

Jack Carter started the next Crisp drive off with an eight-yard pass to Katorian Raines and a short run from Anthony Lewis moved the chains for a Cougar first down inside the Cook 45-yard line. Lofton found big running room on the next play and finished off the drive with a 43-yard touchdown run for the third Cougar score of the night. Richmond knocked the PAT through again to extend the Crisp lead to 21-0 with three minutes to go in the first period.

The Hornets took the next possession inside the Crisp County 40-yard line, but the Cougar defense again held Cook to a turnover on downs. Jayren Fox came up with the stop on the fourth down play, while Moate, Chris Paul and Sirad Bryant all added tackles on the drive.

The Crisp offense ended up with a third down and more than 30 yards to go situation on the ensuing drive after a couple of penalties and they ultimately punted back to the Hornets.

Cook scored their only points of the night on the next drive on a 52-yard touchdown pass to Tayshawn Durden. The point after attempt sailed wide and left Crisp with a 21-6 advantage with 6:36 to play in the second quarter.

The teams swapped defensive stops over the next few drives and the Cougars went into the halftime break with the 21-6 lead.

The Hornets came out with a decent drive to start the second half, but they fumbled the ball away to end the possession. Oliver came up with the recovery for Crisp setting up the offense at their own 44-yard line to begin the next possession.

Palmer and Lofton alternated carries on the possession to get down to the Cook 32-yard line. Palmer then scored his third touchdown of the night and Richmond hit his fourth PAT of the contest for a 28-6 Crisp County lead with 7:43 to go in the third quarter.

Cook County began the ensuing drive pinned inside their own 20 and five plays into the possession Bryant picked off a wayward throw to set the Cougar offense up at the Cook 42.

Carter threw an eight-yard pass to Gaige Little on the second play of the drive, and a Palmer 15-yard run that ended in a fumble recovery by Mainor got Crisp down to the 20-yard line of Cook. The drive stalled out from there however, and Richmond was sent out to attempt a field goal from about 40 yards out that banked off the upright.

The ensuing Cook County drive was filled with penalties on both sides for a few personal fouls and an illegal block. The Hornets eventually had to punt back to the Cougars on the possession.

The two teams proceeded to trade punts for the remainder of the ball game and the Cougars eventually ran out the last couple of minutes of time on a few carries by Keon Troutman. Crisp won by the final score of 28-6.

The fifth straight Crisp County win leaves the Cougars at 6-3 overall so far on the season and 2-0 in region play.

The regular season finale against the Monroe Tornadoes is next up for Crisp County this coming Friday night. The game will feature all of the homecoming festivities since they were forced to be moved due to the hurricane earlier this month.

The Monroe Tornadoes (5-4 overall, 2-0 in region competition) defeated the Worth County Rams on Friday night 14-13 to set up what has turned into a region championship game in Cordele next Friday night.

A Crisp County win would mean a third conecutive region championship for the Cougars.

Kickoff is at “The Den” this coming Friday night at 7:30. 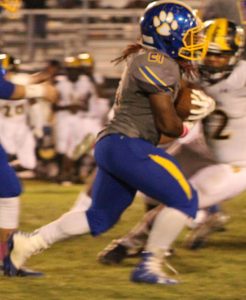 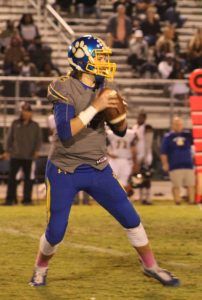 Crisp County running back Marquise Palmer picks up big yards out on the edge against the Cook Hornets.