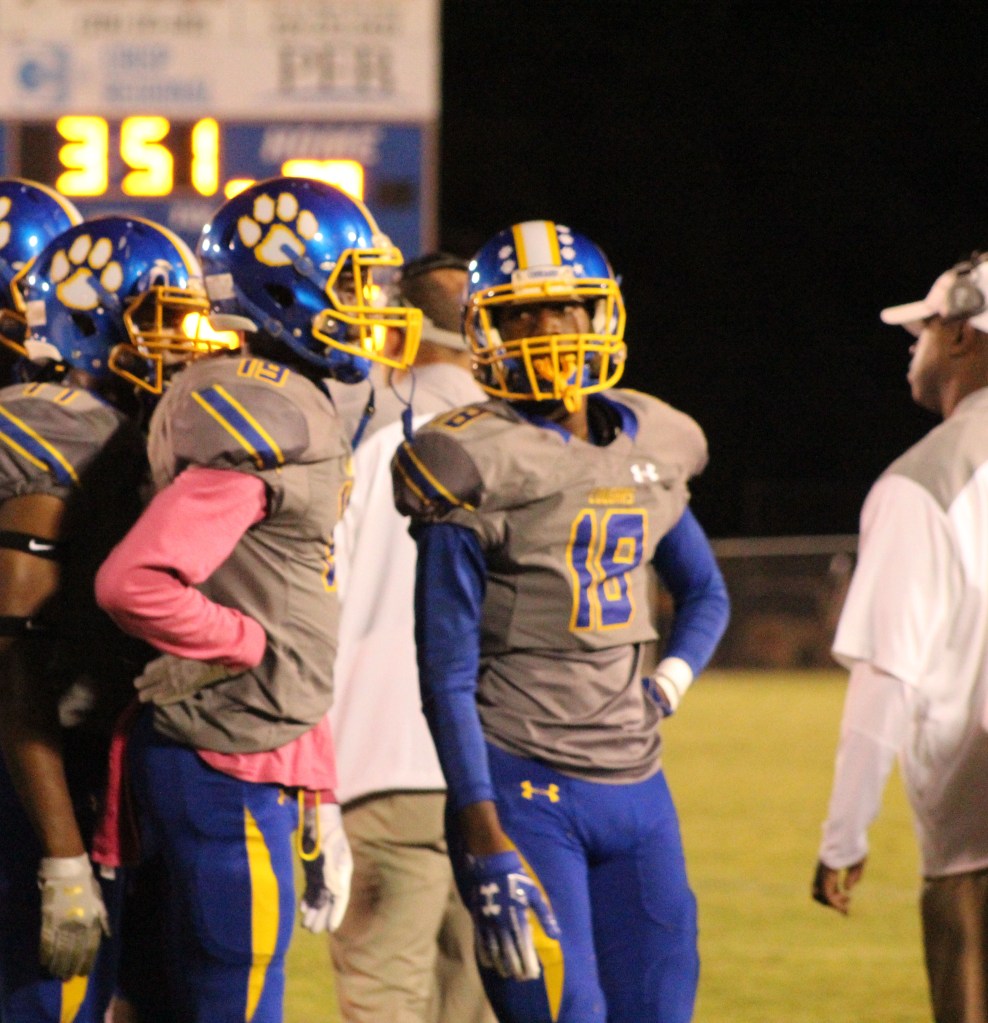 Crisp County receivers Jynick Mainor (18) and Eddie Reese (19) get some instructions during a timeout in the game versus Cook this past Friday night.

CORDELE- The Crisp County Cougars and Crisp Academy Wildcats will be closing out their football regular season schedules this coming Friday night knowing they have already locked up spots in their respective league playoffs.

The Cougars have a region championship on the line against Monroe (5-4), while the CA Wildcats will be taking on Wildcats of the orange variety in Westwood School (1-8) of Camilla.

For Crisp County the situation against Monroe is simple, a win means a third straight region title, and the chance to potentially host games in the first two rounds of the playoffs. The Cougars and Monroe have matched up every year since 2004 and Crisp leads the series with an overall record of 20 wins to 10 losses, including four consecutive wins in the series starting in 2014.

The Cougars will take a five-game winning streak into the game with them Friday night against the Tornadoes. A strong defense and a consistently solid running game have been the keys for the Cougars during the streak, and those two factors were certainly on display in Friday night’s region win over Cook.

The offense ran up 223 yards rushing and four touchdowns on the night between Marquise Palmer, AJ Lofton, Anthony Lewis and Keon Troutman.

The Cougar defense held the Hornets to just one touchdown and forced two turnovers in the 28-6 win. Chris Paul was credited with 17 total tackles in the game, while Jayren Fox and Camion Snead were also in double-digit stops with 11 and 10 respectively.

The Cougars and Monroe play what has turned into the region 1-AAA title game starting at 7:30 on Friday night in ‘The Cougar Den.’

Crisp Academy’s situation is a little more unclear, as they have played a GISA class AA region schedule this year, but due to school numbers they are considered a class A school in football and will play in the separate four team class A playoff bracket, which will include three opponents they have already faced this year in away games.

Those teams are Flint River Academy, Thomas Jefferson Academy, and Monsignor Donovan. Flint River defeated the CA Wildcats earlier this season 35-0 in Woodbury, while Thomas Jefferson won the game against the Cats 18-16 in Louisville, and CA defeated Monsignor Donovan 36-0 in the season opener. The GISA class A bracket is based on a ranking system picked by the GISA administrators and selected coaches to determine which teams will host in the semifinal round of the playoffs on Friday, November 16. The championship game is then scheduled to take place on Friday, November 30.

This past Thursday night’s dominating 38-0 win over Fullington has given the Wildcats a chance to even up their overall record at 5-5 entering the playoffs if they can get a win in Camilla on Friday night.

Crisp and Westwood have not played each other in football since 2015, but the two are familiar opponents over the course of their histories. They have played each other 15 times overall in football, 13 of those games having been played since the start of the 2000 season. They have also been in the same region for several years in all other sports so the competitors and fans are quite familiar with each other at this point. Westwood leads the overall series in football with a record of 12-3, having won the last seven matchups.

Crisp Academy and Westwood kickoff their game in Camilla on Friday night at 7:30 p.m.