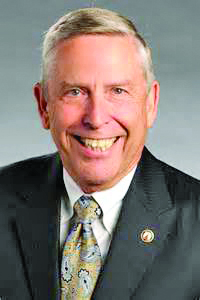 This is the second in a series of my Capitol Notes on Hurricane Michael, the problems that Michael created and the efforts on local, state and federal government agencies to help restore lost services, damaged or totally lost crops, food supplies, electrical power, lost business revenues and other needs and services as well as clean up.

In last week’s Capitol Notes I covered power and agricultural loss and mentioned many of the “heroes” of the restoration of lost goods and services. My intention for this writing was to focus more on those in District 148 that were responsible for working tirelessly to restore power and aid in clean up, but I don’t have those numbers at this time, so I want to give a few more loss statistics and mention some fast-breaking updates on clean up.

In my last article, I mentioned a broad estimation of timber loss of approximately one million acres that I had received. I have a more detailed report from the Forest Health Group of the Georgia Forestry Commission. They preface their report with a statement of the severity of the winds of Michael. “On October 10, 2018, Georgia experienced extreme winds (125-150 miles per hour) from Lake Seminole through Bainbridge, to north of Albany, while heavy rain and hurricane force winds were felt from Albany to near Dublin in the center of the State.”

As I was writing this, I received an update from House Majority Leader Jon Burns with some updated information from Governor Deal’s office on issues that the State has been working hard to help those most impacted by the hurricane with respect to the need for food and shelter. 1. The State released $77 million dollars in food stamp benefits early the weekend of the hurricane. 2. They also implemented at the same time replacement benefits to allow those who receive food stamps to obtain replacement food simply upon a representation that they had lost power over 4 hours. These benefits will continue to grow as people have until October 31 to seek replacement. In District 148 counties receiving this aid include Crisp $231,761.00. 3. Food stamp use was also expanded to hot meals. 4.The State approved overtime for our employees to staff the Red Cross Shelters. 5. Worked with the Federal Food and Nutrition Service (FNS) and food banks to ensure there are enough commodities available under The Emergency Food Assistance Program (TEFAP). 6. As the power and infrastructure situation are stabilizing, disaster food stamps (DSNAP) will be available. This program provides food stamps to persons that normally do not qualify due to income limits but have suffered disaster losses. This program is designed to be rolled out 4-6 weeks after a disaster and will run for seven days. 7. Disaster Temporary Assistance for Needy Families (DTNAF), will be implemented and will allow families that lost housing due to natural disasters to receive DTNAF in the form of a one-time, non-recurrent payment.

As I mentioned last week, the Federal Emergency Management Agency (FEMA) and the Georgia Emergency Management Agency (GEMA) will be picking up the massive piles of debris left by the storm with FEMA paying 75 percent of the cost and GEMA 25 percent of the cost. I spoke with Crisp County officials and am told that they are currently in the process of contracting with the Corps of Engineers who will be responsible for the actual debris removal. For information on where debris should be placed and grouped refer to the Crisp County Sheriff Department Facebook page.

Thank you for the privilege to represent the people of District 148 in the Georgia Legislature. My e-mail is buddy.harden@house.ga.gov.