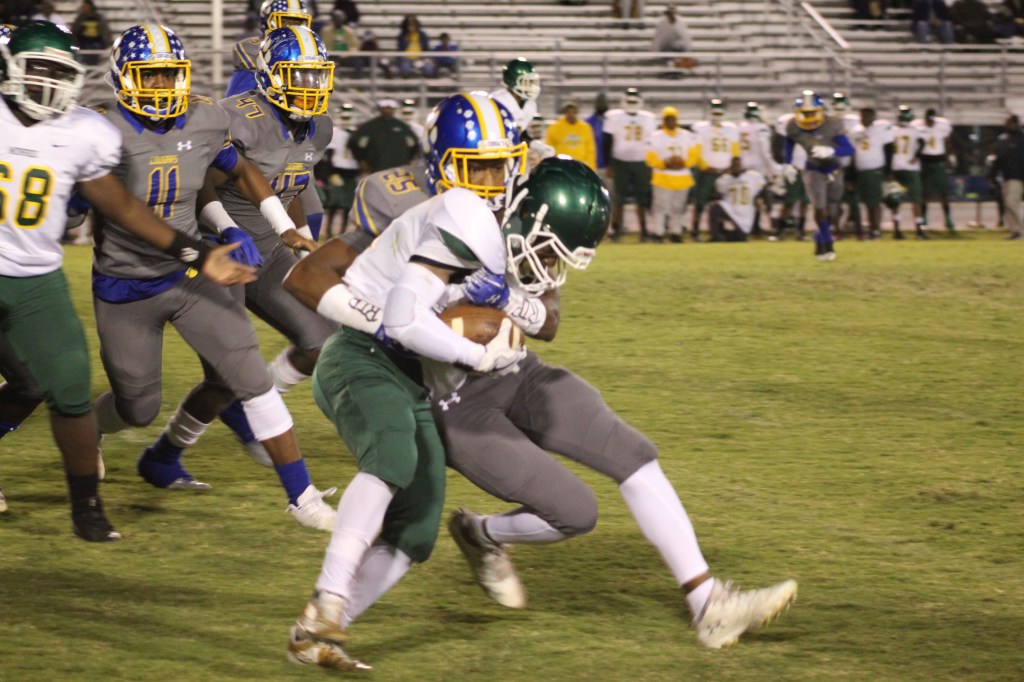 CORDELE- The Crisp County Cougars defeated the Monroe High School Tornadoes on Friday night to win the GHSA region 1-AAA title for the third straight year. Crisp used some big plays on offense to jump out to an early lead and the defense put in a strong effort all night for what resulted in a 38-8 Cougar win.

Crisp’s Jaylin Epps returned the opening kickoff out to the Cougar 25-yard line and the Cougars then scored a touchdown on the very first snap of the game. The offense dialed up a trick play as AJ Lofton caught a backwards pass and subsequently threw a long pass up the sideline to Gaige Little who raced into the end zone for a 75-yard touchdown reception. Connor Richmond hit the point after for a 7-0 Crisp lead after just 23 seconds played.

The Crisp defense subsequently forced a quick punt from Monroe led by a tackle for loss by Chris Paul. The Tornadoes punted the ball away and it took the Cougar offense just five plays to find the end zone again.

After taking over near midfield, Lofton and Marquise Palmer alternated carries to get the Crisp offense down to the Monroe 34-yard line and Palmer finished the drive off with a 34-yard touchdown run. Richmond added the point after for a 14-0 Crisp lead at the 8:45 mark of the first quarter.

The Crisp defense forced another quick punt after stops by Jayren Fox and Nick Mercer forced Monroe into a fourth and long situation. A short punt gave the Cougar offense good field position and four plays later they added to their lead.

Quarterbacks Lofton and Jack Carter swapped carries over the first couple of plays of the drive to get the ball to Monroe’s 14- yard line. Lofton then threw a screen pass to Fredrick Royal and the receiver followed his blocks into the end zone for a 14-yard score. Richmond made the score 21-0 with the extra point and the Cougars were up 21-0 with 5:19 to go in the first period.

Monroe punted on the ensuing drive and the Cougars were stopped on a fourth down attempt late in the quarter but they scored their fourth touchdown of the night on the first play of the second period.

This time the score came on a long pass from Lofton to receiver Eddie Reese for a touchdown of nearly 40 yards. The extra point put the Cougars ahead 28-0 just 15 seconds into the second quarter.

Monroe came out throwing on the next drive and Crisp County’s Jy’Nick Mainor made a diving interception over the middle to give the Cougar offense possession of the football at their own 43-yard line.

Crisp ultimately had to punt the ball back to Monroe but the defense forced another three and out to set up the final score of the first half.

Carter threw a 10-yard pass to Reese on third and long on the scoring drive and Palmer picked up the first down on fourth and short. Four plays later, Richmond hit a 30-yard field goal to put Crisp ahead 31-0 with 1:19 to play in the first half. Monroe ran out the remaining time in the first half and the Cougars went into the halftime homecoming festivities up 31-0.

Monroe was forced to punt once more on their first drive of the second half after Ahdarrious Gee, Kamron Moate and Paul all came up with tackles on the possession.

After a Cougar punt, Monroe was able to get some offense going and moved the ball down inside the Crisp 30-yard line, but Preston Lavant and Mercer came up with sacks on consecutive plays to force a turnover on downs.

Just two plays later Lofton threw a short pass to Tubby Spivey in the flats and the receiver broke one tackle and found plenty of running room for what resulted in a 46-yard touchdown. Richmond’s final extra point of the night made the score 38-0 with 5:28 to go in the third period.

Crisp found the end zone one final time later in the quarter on a pass from Carter to Katorian Raines but a penalty brought the score back and kept the points off the board.

The teams traded defensive stops for most of the fourth quarter while many of the Cougar backups were in for some playing time. Monroe scored their only points in the fourth period to bring the final score out to 38-8 in favor of the Cougars.

“It feels great. I am so happy for the coaching staff, the players, the community and all the fans that stuck with us through the hard times,” said Crisp Head Coach Brad Harber speaking about the region title.

The Cougars will be hosting a first round playoff game next Friday night and will be taking a six game winning streak and a 7-3 overall record with them into the postseason.

“Our philosphy around here is we want to be playing our best ball in week 11, and I think we’re very close to that right now,” Harber added. 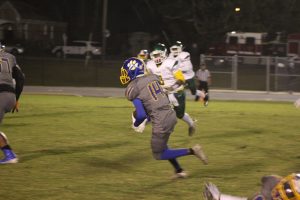 Crisp County receiver Fredrick Royal (14) picks up yardage after making a catch during Friday’s game. The play resulted in a touchdown by Crisp. 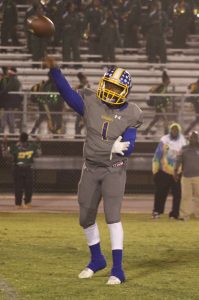