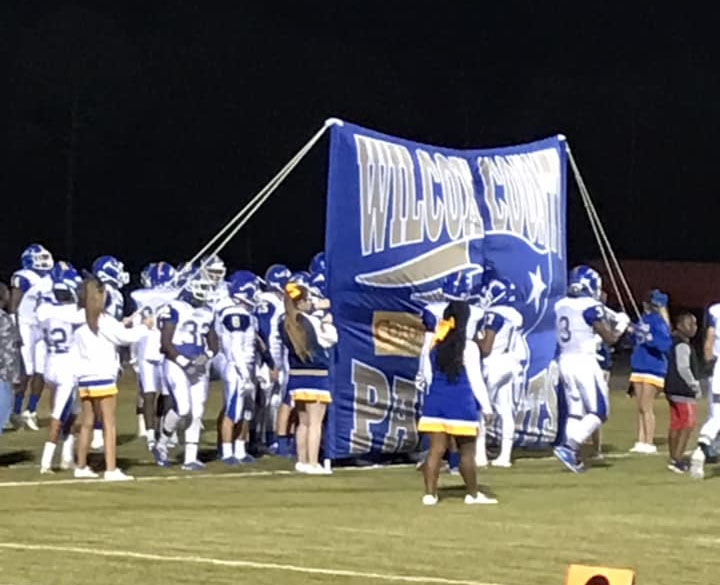 The Wilcox County Patriots prepare to take the field prior to Friday night’s game. (photo by Lisa Harden)

PEARSON— The Wilcox County High School football team is back in the playoffs for the first time since 2012 after defeating region opponent Atkinson County 40-0 on Friday night in Pearson.

The Atkinson County Rebels opened the game with possession of the ball and took it down into Wilcox territory, but the Patriot defense forced the Rebels to punt later on in the drive. Branson Owens, Kemorrian Larkin and Christian Freeman contributed with tackles for the Wilcox defense on the possession.

The Patriots were forced to punt on their first offensive possession of the night as well, but they opened the scoring shortly after with a defensive touchdown.

The Rebels drove down to the Wilcox 24-yard line before fumbling the ball in the backfield after Martez Thrower broke through the line and caused some problems. Desmond Tisdol scooped the ball up for the Patriots and returned it for a 70-yard touchdown. EJ Howard ran in the two-point conversion attempt to give the Patriots an 8-0 lead with 3:57 to go in the first quarter.

The Atkinson Rebels drove down inside the Patriot 15-yard line on the ensuing drive but Wilcox caused another fumble and Azavion Deans was credited with the recovery.

On the very next play, Wilcox quarterback Noah Hollingsworth ran up the middle and found plenty of room as he outpaced a couple of Atkinson County defenders all the way for a 93-yard touchdown run. The point after attempt was no good, but the Patriots were up 14-0 with less than a minute to go in the first quarter.

The Patriot defense forced a turnover on the downs on the subsequent Rebel possession with stops by Owens, Thrower and Tisdol.

Hollingsworth used another long run of 62 yards on the first play of the following drive to set up a one-yard touchdown run by Jacquarius Dixon for a 20-0 lead at the 10:22 mark of the second quarter.

The Rebels responded with a decent drive out to the Patriot 20-yard line, but they fumbled the ball once more and Thrower was there for the recovery to force the turnover.

The big play on the ensuing Wilcox drive came on a 56-yard run by Justin Moore on a third down play. Tisdol ran in the fourth Wilcox touchdown of the night from 14 yards out to cap off the drive. The touchdown put the Patriots up 26-0 heading into the second half.

The teams swapped defensive stops on the first couple of possessions in the second half, and Wilcox then added to their lead late in the third quarter.

Justin Moore picked up the fifth Patriot score of the night on a 15-yard touchdown run, and Manny Carrillo hit the point after for a 33-0 lead with 3:54 to go in the third period.

The next Atkinson County drive ended in another turnover as Larkin hauled in an interception to give the Patriot offense possession.

Hollingsworth ran for a 55-yard gain down inside the Atkinson 10-yard line to start the next drive. Dixon then carried the ball twice to get down to the Rebel six-yard line, and Hollingsworth capped off the drive from there with a touchdown run. Carrillo’s point after made the score 40-0 with 1:10 to go in the third quarter.

The teams swapped defensive stops for the entire fourth quarter to leave the final score at 40-0 in favor of the Patriots. Michael Griffin recovered another Atkinson fumble in the fourth period, which helped to keep the shutout intact.

Wilcox County Head Coach Ken Cofer was pleased with the response from the Patriots in the must win game with playoff hopes on the line.

“Make it or break for us getting into the playoffs last Friday,” said Cofer. “We had to recover from losing a close one to Turner and we did that.”

Hollingsworth finished his big night with nine carries for 243 yards and two scores. He only threw four passes in the contest, one of which was a 32-yard completion to Owens. Moore was another crucial part of the offensive production with a touchdown and 120 yards on 10 rushes. Dixon finished the game with nine carries for 30 yards and a touchdown.

Tisdol had eight total tackles to go along with his offensive and defensive touchdowns. Owens led the Patriots in tackles on the night with 11 total. Larkin had seven total stops to go with the interception, while Thrower made five tackles to go with his fumble recovery.

Other defensive contributors for the Patriots were Hollingsworth with four total tackles, Lagan Luke with three total tackles, and Dixon with one sack.

The win over Atkinson sends the Patriots into the playoffs with a 5-5 record, which was good enough for a ranking of 23 out of the 24 teams in GHSA class A that made it into the playoffs. Wilcox will travel to play Trion High School (7-3, ranked 10) on Friday night for the first round of state.

“So we go to Trion with a little bit of confidence and, hopefully, with a couple of players we’ve missed the past couple of weeks,” said Coach Cofer. “Our kids are excited, but our goal from day one was to make a run in the playoffs, not just get in.”

The Trion Bulldogs have an unbeaten 5-0 record on their home field so far this season, but the Patriots picked up three out of their five regular season wins on the road during this season.