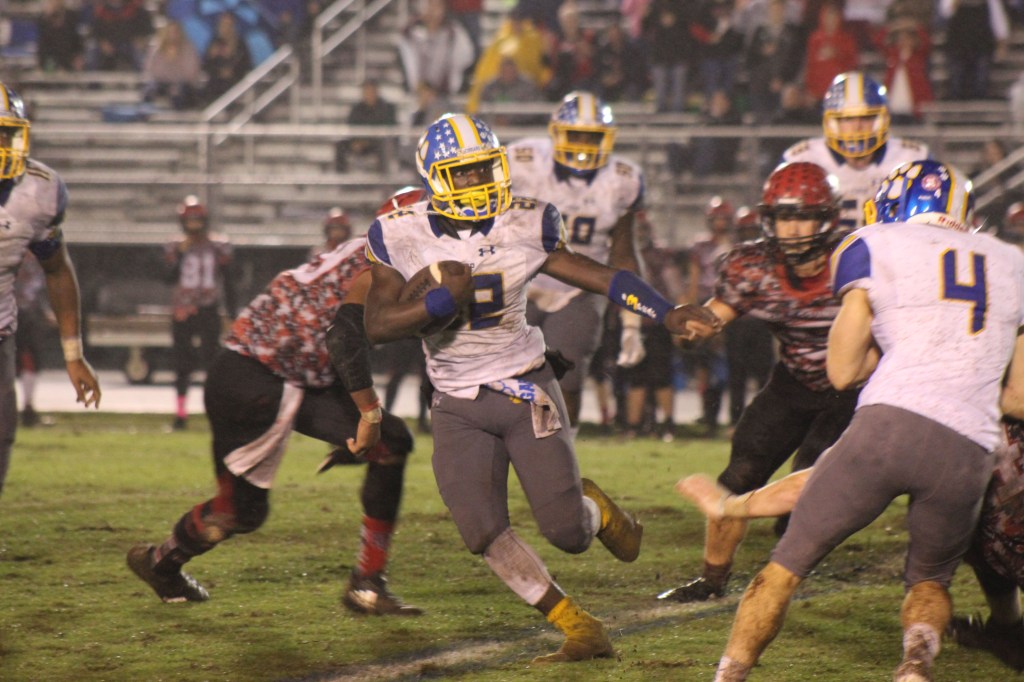 Crisp County running back Marquez Palmer (22) picks up yards as Gaige Little (4) helps clear a path with a block during the Cougars’ first round playoff game against Pike County.

CORDELE- The Crisp County Cougars had their season come to an end at the hands of a late touchdown by the Pike County Pirates for the second season in a row. The Pirates came to Cordele for a GHSA class AAA  first round playoff game on Friday night and came away with a 9-3 overtime win.

Rain ended up playing a big factor in the game as several fumbles cost the Cougars throughout the contest, including one on their first drive of the night.

The Cougar defense forced a quick stop in return and Crisp County’s offense put together a decent drive on the next possession.

An eight-yard pass from Jack Carter to Chris Paul got the drive out to a good start, and runs by AJ Lofton and Marquise Palmer saw the Cougars move the ball down to the Pike County 40-yard line. A high snap sailed into the backfield later on in the drive, however, and the Pirates took possession of the ball at the Crisp 34-yard line after a wild sequence that led to a Pike fumble recovery.

The Pirates were unable to take advantage of the short field on their following drive, however. Cougar defenders Paul and Jaquan Bass made stops on the drive to set up a fourth and long situation, and Sirad Bryant made a big tackle to force a turnover on downs.

Lofton, Palmer and Tubby Spivey made contributions on the next Cougar possession, but they were forced to punt after stalling out near midfield.

The teams traded punts over the next several possessions as the Cougar defense continued to stop the tough Pike County rushing attack. Paul, Bass, Preston Lavant, and Nick Mercer all made plays to keep the Pirates in check during the second quarter.

The Cougars then got some offense going with just under two minutes to go in the second period.

Carter threw passes to Palmer for a couple of quick gains before hitting Spivey on consecutive big plays for a first down inside the Pike 40-yard line. Pike County came up with an interception shortly after and the teams took a 0-0 score into the halftime break after a defensive struggle type first half.

The Pirates opened the second half with possession of the ball but were quickly held to a punt after big tackles by Paul and Colton Oliver.

Palmer got the ground attack going for the Cougars on the subsequent possession, but Crisp had to punt back to Pike with 7:46 to go in the third quarter.

Pike took over at their own 30-yard line and began a long drive that resulted in the first score of the night and also ran out most of the remaining time of the third quarter. Trenton Richey, Jayren Fox, Paul and Bass all helped the Cougar defense keep Pike out of the end zone on the possession, but the Pirates got a field goal from 55 yards out for the first points of the game. Pike led 3-0 with 40 seconds to go in the third quarter.

The ensuing drive got out to a great start for Crisp after Carter threw a 25-yard pass to Fredrick Royal, but Pike held them to another punt. Bailey Barfield drilled a 60-yard punt to pin the Pirates at their own nine-yard line with 10:57 to go in the game.

The Pirates attempted to run out the rest of the time by picking up a couple of first downs. Richey, Paul, Camion Snead, and Fox all made tackles on the Pike possession, and a couple of penalties then put the Pirates in a long yardage situation so they had to punt.

Lofton ran the return back roughly 20 yards out to midfield but an illegal block forced the Cougars to start the ensuing offensive possession at their own 36-yard line instead.

The Cougars moved the ball into Pirate territory on a 20-yard pass from Carter to Palmer and a roughing the kicker call on the Pirates later on kept the possession alive with 2:33 to play in the game.

Lofton and Palmer swapped carries over the next few plays to get the Cougars down into scoring territory near the Pike 20-yard line. The Pirates then did just enough to force the Cougars into a fourth and short situation with 27 seconds to play and the game on the line. Cougar kicker Connor Richmond was sent out on the fourth down play and delivered a clutch field goal from 30 yards out to tie the score at 3-3 with 22 seconds to go in regulation.

The Pirates ran the remaining time off the clock from there to send the game into overtime.

The Cougars started the overtime period with possession of the football but another fumble recovery by Pike gave the Pirates a chance to win the game.

They did just that two plays later with a 12-yard touchdown run to win the game 9-3 after overtime.

The crushing loss eliminated the Cougars from the playoffs and left them with a 7-4 mark on the season that was highlighted by a six game winning streak and a region title following a 1-3 start to the year. 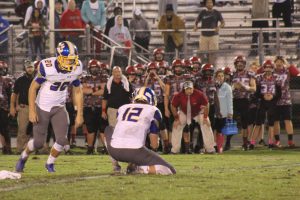 Crisp County kicker Connor Richmond steps up for a late game-tying field goal as Jack Carter (12) holds during Friday night’s first round playoff game against Pike County. Richmond’s kick tied the score at 3-3 and sent the game into overtime. 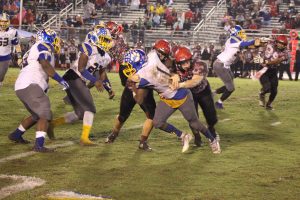 Crisp quarterback AJ Lofton (1) drags defenders with him on a run during Friday night’s first round playoff game against Pike County.