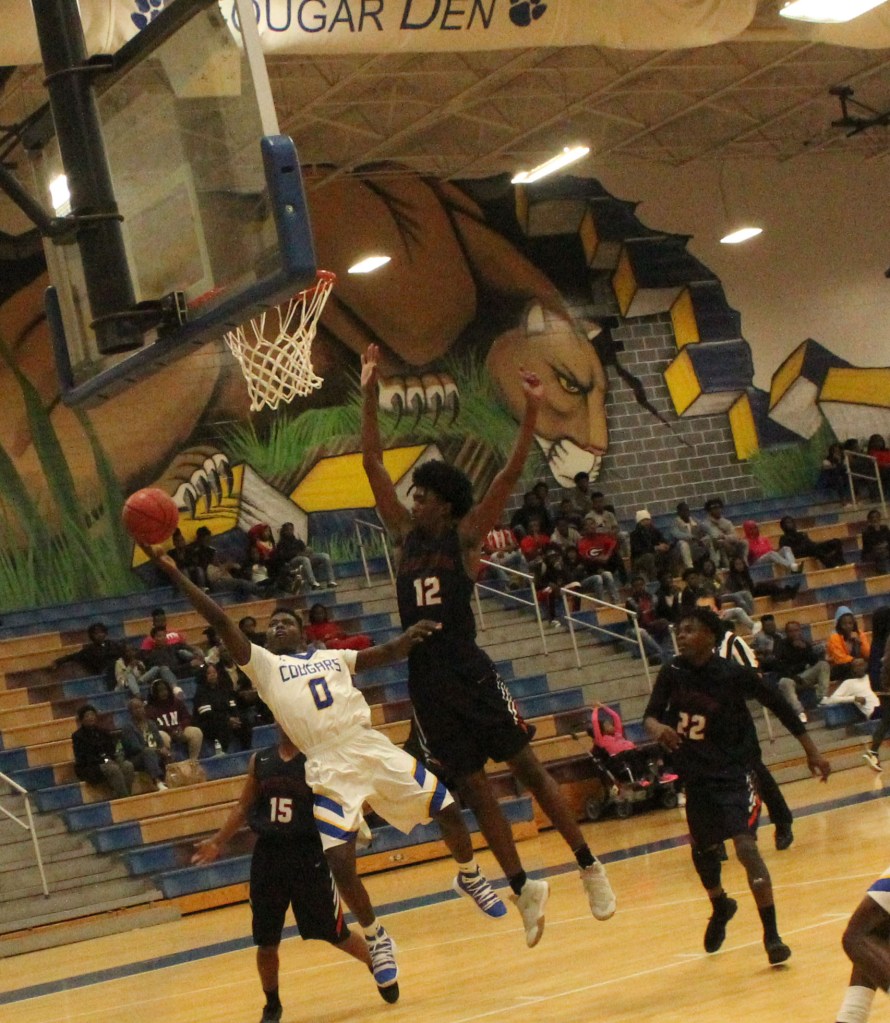 Crisp County’s PJ Coleman (0) gets behind the Northside defense and makes a difficult layup during Saturday’s scrimmage game. Coleman finihsed the game with 19 points.

CORDELE— The Crisp County basketball teams are closing in on tipoff for the 2018-2019 regular season, but first they had scrimmage games on Saturday afternoon to close out their preseason preparations.

The Northside Warner Robins Eagles were in Cordele this past Saturday afternoon for what turned out to be an exciting scrimmage game. The Eagles stole the win in the boys’ game using a late run in the fourth quarter that saw them top the Cougars by a final score of 66-62.

Northside led by as many as 12 points early in the third quarter before the Cougars used some big runs to take a seven point lead in the fourth period. Northside then prevailed after going on a 14-3 run to close out the contest.

In first quarter action, the Eagles jumped out to a quick 6-0 lead but the Cougars responded over the next few minutes to bring the score even at 10-10. PJ Coleman had eight of the 10 Cougar points in the first quarter while Courtney Griffin made a layup for the other two points. The Eagles scored the final four points of the first period to take a 14-10 lead into the second.

Northside outscored Crisp 20-14 in the second frame to extend their lead. Cougar senior KJ Williams got the offense working in the quarter by hitting three three-point shots to keep Crisp within striking distance. Coleman and Nathan Willis each had a bucket in the period to combine for four of the five other points, but Northside had a 34-24 lead at the half.

A back and forth third quarter saw the Cougars cut into the Eagle lead using a late 11-0 run.

Williams kept his scoring going in the frame with two more three-pointers, a fast break layup and a couple of free throws for a total of nine points. Willis made a layup and hit a mid-range jump shot for four points in the period, while Malik Hall and Coleman each had two points in the period. Northside’s lead was down to one point after the big run from Crisp, but the Eagles got a basket and a free throw to head into the fourth quarter with a 46-42 lead.

The Cougars went on a 17-6 run to open the fourth quarter for a 59-52 lead with two and a half minutes left in the game. Coleman and Willis were the big contributors in that stretch with seven points each, while Hall scored the other three points on the run.

From there, Northside closed the game out with their 14-3 run for the final score of 66-62.

Williams led Crisp County in scoring on the night with 20 points, while Coleman was close behind him with 19. Willis also got into double digits with 13 points. Other Cougar scorers were Hall with eight points and Griffin with two.

In girls’ action earlier in the day, Northside took the win over the Lady Cougars 55-17. The leading scorer for the Lady Cougars was E’lacious Holt with nine points on a couple of three pointers, a free throw and a two-point shot. Other Lady Cougar scorers were Jadah Mumphrey, Adasia Lee, and Aaliyah Hardemon with two points each, while Peyton Bozeman and Nikujha Smith each had one point.

The 2018-2019 Crisp County basketball season tips off Saturday evening against the Wilcox County Patriots. The Lady Cougars and Lady Patriots are scheduled for a 6 p.m. game with the Cougars versus Patriots boys’ matchup to follow.

The Wilcox County teams swept all four matchups between the two schools last season, winning both girls’ contest and picking up exciting wins in both boys’ games. 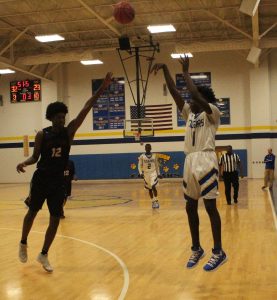 CCHS senior guard KJ Williams (1) fires a three-point shot from the corner. Williams finished as the leading scorer for the Cougars in the scrimmage with 20 points. 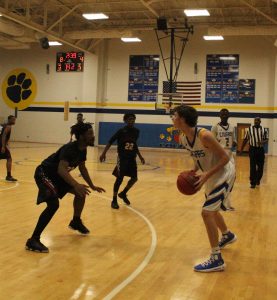 CCHS senior Nathan Willis scans the floor looking to pass the ball to an open teammate. 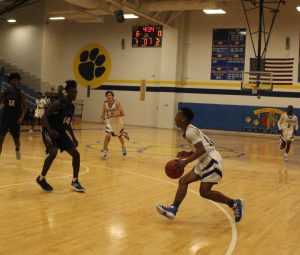 Crisp County’s Willie Poole creates space off the dribble in an attempt to free up an open shot.