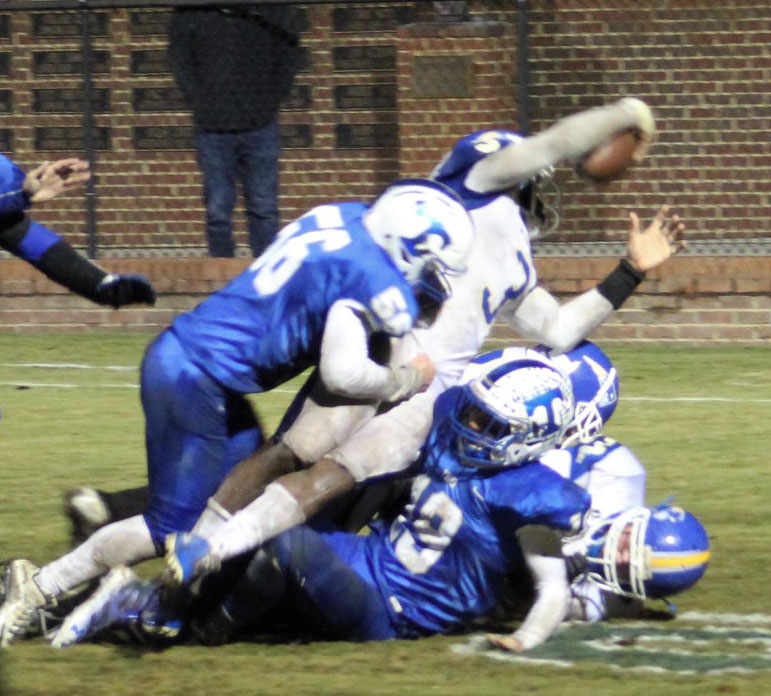 Wilcox County’s Desmond Tisdol (3) stretches the ball out over the goal line for a touchdown as a couple of Trion Bulldog defenders attempt to keep him out during Friday’s game. (photo by Lynn Langford)

TRION— The Wilcox County Patriots played their first playoff game since 2012 on Friday night in a contest against Trion High School that came down to the very end.

The number 23 ranked Patriots led for a good portion of the contest and even had a chance to steal the lead late, but the tenth seeded Trion High School Bulldogs ultimately held off Wilcox to win by a score of 20-19.

The contest featured a scoreless first quarter in which both defenses prevented the opposing offense from getting past the 50-yard line.

The Trion Bulldogs then took the lead three minutes into the second quarter on a 16-yard touchdown run for a 7-0 score line.

The Patriots responded with a touchdown drive on the next possession for their first points of the night.

The drive started on the Wilcox 29-yard line after the kickoff return from EJ Howard. Noah Hollingsworth then used three consecutive runs, followed by short throws to Christian Freeman and Desmond Tisdol to move the ball inside the Trion 40-yard line. Jacquarius Dixon later tacked on six yards on a couple of consecutive rushes, and a Trion facemask penalty set up first and goal from the five-yard line. Justin Moore scored a rushing touchdown on the next play for the first Wilcox points of the night. The two-point attempt was unsuccessful, so Trion maintained a 7-6 lead at the 4:56 mark of the second period.

On the ensuing kickoff, the Wilcox coverage team pinned Trion at their own 14-yard line as Lagan Luke and Cameron Patterson converged on the tackle. A sack by Branson Owens three plays later set up a long yardage situation for Trion, and the Bulldogs were then forced to punt.

Tisdol capped off the next Wilcox offensive possession with a three-yard touchdown run with 15 seconds to go in the first half. The key plays on the drive were a 10-yard pass from Hollingsworth to Howard, another facemask penalty on the Bulldogs and an 11-yard run by Moore. The conversion try was no good but Tisdol’s touchdown sent Wilcox into the halftime break with a 12-7 lead.

The third quarter got out to a wild start with the teams trading several turnovers on the first few drives.

Tisdol intercepted a Trion pass early in the third period, but the Patriots subsequently gave the ball away on a fumble.

Owens gave the Patriots the football right back as he pulled in an interception of his own, but the Wilcox offense was held to a punt on the ensuing possession.

The following Trion drive ended in a punt attempt as well after a sack by Tisdol set up a third down and 29 yards to go situation. Tisdol then broke through the line on the punt attempt and blocked the kick before scooping the ball up and taking it into the end zone for his second score of the game. Manny Carrillo hit the point after to put the Patriots up 19-7 with just over 20 seconds remaining in the third quarter.

The Bulldogs cut into the deficit with a 69-yard touchdown run just two plays later. Wilcox blocked the extra point attempt to maintain a 19-13 lead heading into the fourth quarter.

Trion forced a Wilcox punt to start the fourth period, and the Bulldogs then took a 20-19 lead with 6:52 to play in the game after a short touchdown run followed by the extra point.

An exchange of punts from there left Wilcox with the ball at their own 35-yard line with two and a half minutes to play.

Hollingsworth started the drive with an eight-yard completion to Howard, and the Patriots picked up a crucial fourth down conversion shortly after when Hollingsworth threw to Owens for another eight-yard pickup. Passes to Moore and Howard got the Patriots inside the Trion 40 yard-line with 44 seconds to play. A defensive holding penalty on the Bulldogs four plays later set Wilcox up with a first down at the 29-yard line with 10 seconds to go in the contest. Hollingsworth next connected with Thrower for a 17-yard gain down to the 12-yard line. The Patriots then attempted to win the game on a 29-yard field goal try, but the kick was unsuccessful so Trion held on to win by the 20-19 score line to advance and eliminate the Patriots in heartbreaking fashion.

Tisdol’s big night added with contributions from all up and down the Wilcox roster helped give the Patriots a chance in the contest.

Tisdol finished the night with seven rushes for 22 yards, one touchdown, and two catches for 11 yards on offense. Between defense and special teams plays he had seven total tackles, a sack, an interception, the blocked punt and subsequent recovery for a touchdown, a blocked extra point and six punts for 180 yards.

Hollingsworth finished the game with 12 completions on 24 pass attempts for 116 yards and he also ran the ball 21 times for 88 yards.

Other key offensive contributors for Wilcox were: Moore- three carries for 12 yards, a touchdown and one catch for six yards, Matt McAdoo- two catches for 41 yards, Howard- four catches for 25 yards and one carry for four yards, Thrower, Owens and Freeman- one catch apiece.

The Patriots had to fight off a great deal of injuries throughout the 2018 season, but they persevered to become a very competitive football team.

“We only had five seniors and only one finished the season uninjured. We’ve had our share of injuries this season (broken neck, two torn up shoulders, ACL tear, concussions, etc.). Kids progressively got better throughout the season and played more as a team,” said Head Coach Ken Cofer.

The playoff loss means the Patriots finished the season with an overall record of 5-6, but Wilcox County certainly looks to have turned the football program in the right direction going forward into the next few seasons.

“We lost a few close ballgames that we’ll have to make up for next year, but we have some hard workers at Wilcox County High School. Very proud of their effort as the season progressed,” Coach Cofer concluded.

All photos by Lynn Langford. 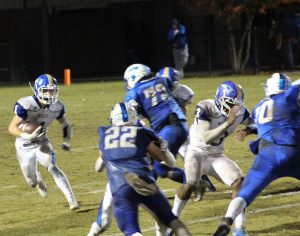 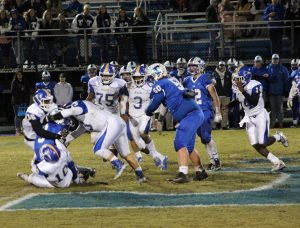 A group of Wilcox County Patriots, including Keaun Brown (36) and Branson Owens (10), bring down a Trion ball carrier during Friday night’s game. 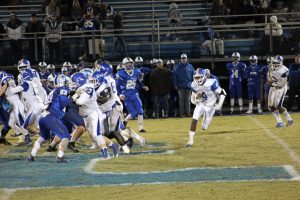