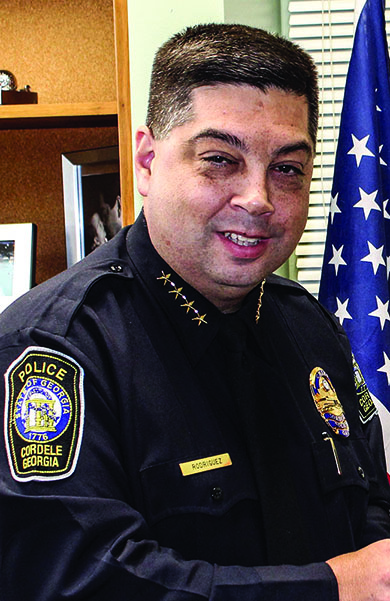 Cordele Police Chief Rob Rodriguez turned in his resignation to City Manager Edward Beach Wednesday morning. He will remain in his position until December 18.

Cordele Police Chief Rob Rodriguez handed in his resignation to City Manager Edward Beach on Wednesday morning. He will remain in his position until December 18th.

There are currently no reports as to why Rodriguez has chosen to leave the Cordele Police Department, but Beach said he and his staff, along with guidance from city commissioners, will work to ensure a seamless change in leadership.

“As it currently stands he will remain chief until his resignation goes into effect on December 18th,” Beach said. “We’re going to try to do some planning in the meantime and Chief Rodriguez has agreed to help us with that planning. It will be a good transition and it will ultimately be what’s best for the city and for Chief Rodriguez.”

This is a developing story. Check cordeledispatch.com again later or read the full story in Saturday’s print edition of the Dispatch.