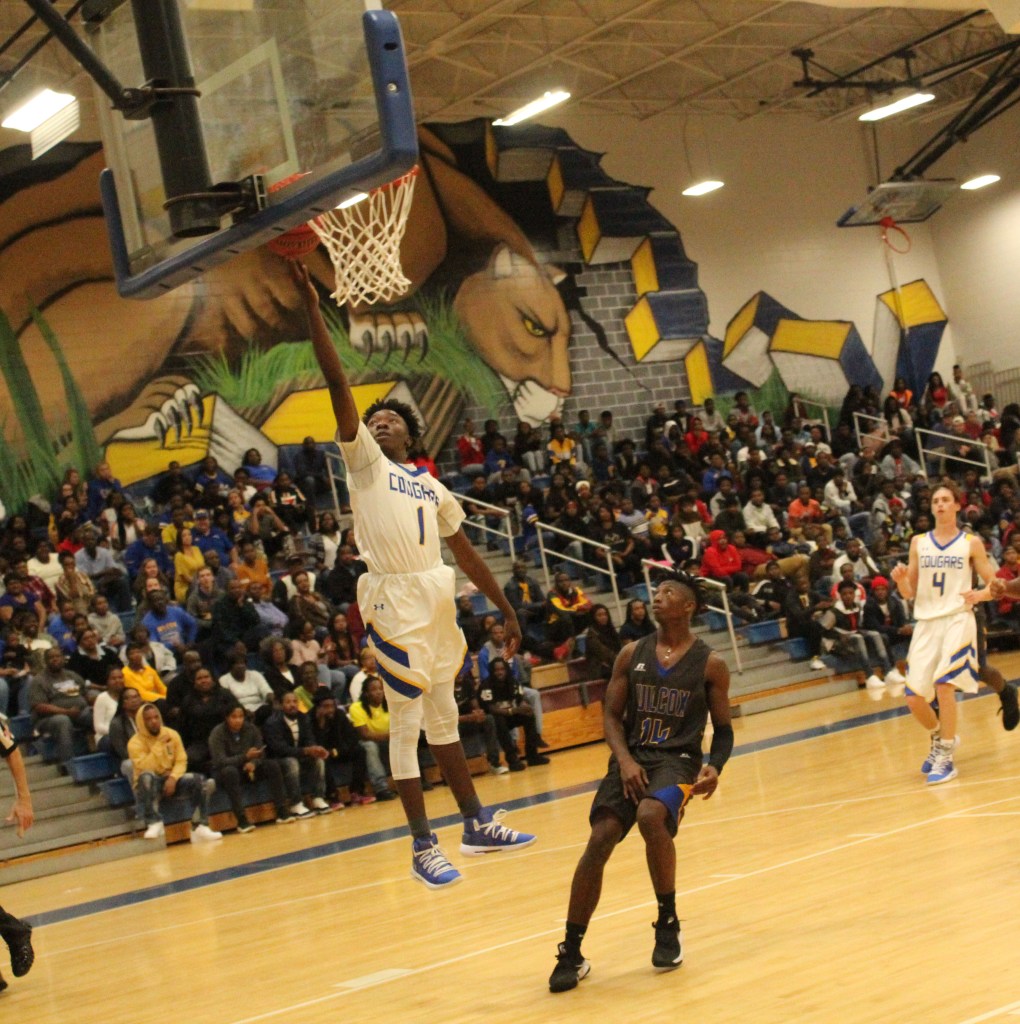 CORDELE— The Crisp County and Wilcox County high school basketball teams opened up their 2018-2019 regular season schedules on Saturday evening in Cordele with a pair of entertaining contests. Wilcox came up with the sweep on the night with wins in the varsity girls’ and boys’ contest.

The matchup between the Lady Cougars and the Lady Patriots got out to an interesting start with the two teams swapping the lead several times in the first quarter.

Wilcox had a 13-12 lead at the end of the first quarter thanks to scores from Alayshia Dixon, Asia Montgomery, Nicole Rucker and Ja’Merical Marshall. Peyton Bozeman, Alexis Porter and E’lacious Holt all made three point shots in the first period to keep Crisp County within striking distance.

The Lady Cougars opened the second quarter with a 9-4 scoring run to take the lead. Aaliyah Hardemon had five of the points during that stretch for the Lady Cougars, including a three-point shot, while Vernasia Sanders and Bozeman combined for the other four points on the scoring run. Wilcox retook the lead at 23-21 going into halftime after using a 6-0 run on buckets by Marshall, Dixon and Montgomery to close out the half.

Crisp County opened the third quarter with a 13-2 scoring run to jump out to a 34-25 lead. Porter knocked down two three-point shots during the big Lady Cougar run, while Bozeman and Adasia Lee combined for the other seven points.

The Lady Patriots closed the gap shortly after with an 8-2 scoring run that cut the Crisp lead to 36-35 going into the fourth quarter. Marshall had four of those eight points, while Erianna Hargrove and Dixon each had two.

Wilcox County subsequently outscored the Lady Cougars 19-7 in the fourth quarter to put the game away for a 54-43 Lady Patriot win.

Destiny Tisdol and Dixon each had six points for the Lady Patriots in the fourth quarter. Rucker hit a three-point shot in the quarter for Wilcox, while Marshall and Montgomery each had two points.

Porter picked up her fourth three-point basket of the night in the period, and Hardemon had the other four points in the quarter for the Lady Cougars.

Dixon was the overall leading scorer in the game with 18 total points, while Montgomery and Marshall were both also in double figures with 11 and 10 points respectively. Other Lady Patriot scorers: Tisdol- eight points, Rucker- five, and Hargrove- two.

The boys’ contest was a fast paced, high scoring game that saw Wilcox County pick up an 84-73 win.

The Patriots jumped out to an 8-0 lead at the start of the game on scores by Azavion Deans, Desmond Tisdol and Jordan Brown. The Cougars responded with a scoring run, led by nine points from PJ Coleman and four from Ty McKenzie, that cut the Wilcox lead to 19-18. Malik Hall and Willie Poole also scored in the quarter for Crisp County.

The Patriots then closed out the first quarter on an 8-0 run to take a 27-18 lead into the second period. Wilcox knocked down five three-pointers in the first quarter, two from Brown and three from Demetric Young, and continued their hot shooting night over the next three quarters.

Brown knocked down three more three-pointers in the second quarter, while Young added one more shot made from long distance to go with scores by Tisdol and Cameron Patterson that saw the Patriots extend the lead to 45-29 going into halftime.

Wilcox outscored Crisp 21-14 in the third quarter to add to their lead. Tisdol scored 13 points for the Patriots in the quarter mostly on fast break layups, while Young, Deans and Keyshawn Howard all got in on the scoring in the period.

KJ Williams hit a couple of three-point shots and made a layup out on the break to lead the Cougars with eight points in the third period. Coleman, McKenzie and Hall each chipped in with two points apiece in the third.

A quick 10-0 run sparked by four points apiece from AJ Lofton and Cortez Thomas gave the Cougars some life to start the fourth quarter as the Wilcox lead was cut down to 66-53.

Brown, Howard and Tisdol each had two baskets in the quarter to lead Wilcox on a 13-6 run shortly after. The run put the Patriots ahead 79-59 with just over two minutes to play.

McKenzie, Coleman, Poole and Williams all had late scores to cut into the Wilcox lead, but the Patriots came out on top by the 84-73 final score.

Tisdol was the overall leading scorer on the night with 25 points, while Brown was close behind with 23. Other Patriot scorers: Young- 15 points, Deans- nine, Howard- seven, Monterrius Edmond- three, and Patterson- two.

Coleman was the leading scorer for the Cougars with 19 points, while Williams and McKenzie both finished the contest with 12. Other Cougar scorers were: Poole- six points, Hall- five, Mar Daniels- five, Lofton- four, Nathan Willis- four, Thomas- four, and Damion Cross- two.

The Crisp County teams were in Thanksgiving tournament action at Lowndes County yesterday, and will continue their tournament schedule today (Tuesday, November 20) in Valdosta versus Tift County for a double header starting at 3 p.m. Following that, the Cougar teams will play Houston County at home next Tuesday starting at 6 p.m.

The Wilcox County teams will be back in action on Wednesday, November 28, for region home games against Lanier County starting at 6 p.m. 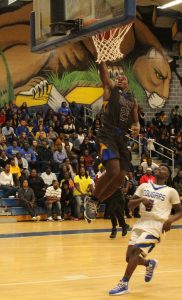 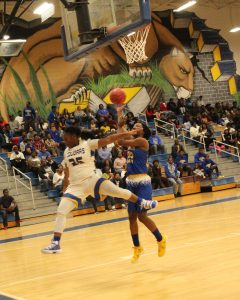 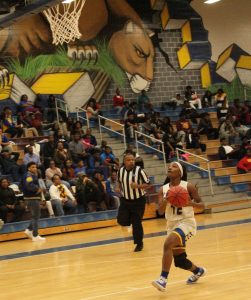 Crisp County’s Aaliyah Hardemon dribbles her way to the basket for an open shot attempt during Saturday night’s game. 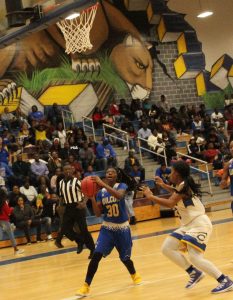 Wilcox County’s Destiny Tisdol gets to the basket for a shot attempt against Crisp County. 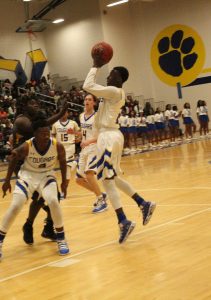 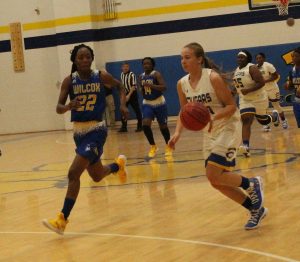