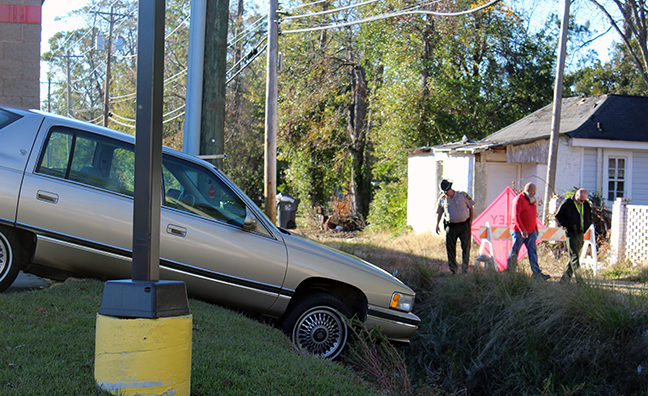 A cadillac driven by Demarcus "Chip" Bell teeters at the edge of a ditch behind the Goo-Goo Car Wash on 16th Avenue as Crisp County Sheriff Billy Hancock and two agents walk the adjacent alley looking for clues. Bell, who is wanted for a parole violation, allegedly brandished a handgun at a CCSO deputy at around 3:15 Tuesday afternoon before attempting to flee.

A man wanted for a parole violation brandished a gun at a Crisp County Sheriff’s Office deputy Tuesday afternoon after attempting to flee from a traffic stop near the Goo-Goo Car Wash on 16th Avenue.

Demarcus Bell, aka “Chip,” is a 40-year-old black male about six feet tall with brown eyes and hair. Area law enforcement officers are on the lookout for Bell, who is believed to be armed with a handgun.

This is a breaking news story. More information will be published as it becomes available.