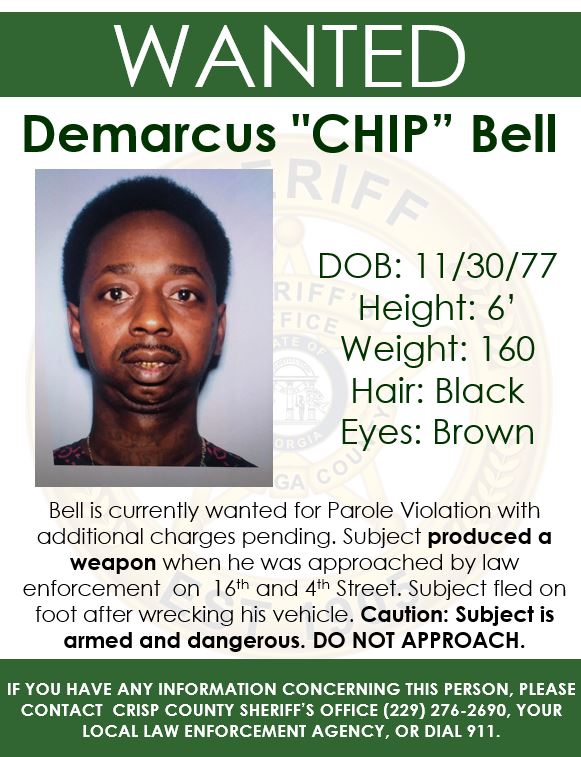 Crisp County law enforcement are on the lookout for Demarcus "Chip" Bell after he brandished a weapon at a Crisp County Sheriff's Deputy while attempting to flee a traffic stop near the Goo-Goo Car Wash at the corner of 16th Avenue and 4th Street. He is believed to be armed and dangerous, and people should not approach him.

Crisp County Sheriff Billy Hancock has announced a $500 reward for anyone who provides information that leads to the arrest of Demarcus “Chip” Bell, a 40-year-old man who reportedly brandished a handgun while fleeing from a deputy on Tuesday.

Bell was wanted for a parole violation when a CCSO deputy attempted to pull him over near the Goo-Goo Car Wash on 16th Avenue at approximately 3:20 p.m. on Tuesday. Bell reportedly attempted to flee from the deputy through the car wash parking lot and wrecked near an alley that runs behind the business.

Bell then fled the scene on foot, at which point he flashed a handgun at the deputy who was in pursuit. Bell remains at large and is believed to be armed and dangerous.

This is a developing story. Check back later for more information or read the full story in Saturday’s print edition of the Dispatch.