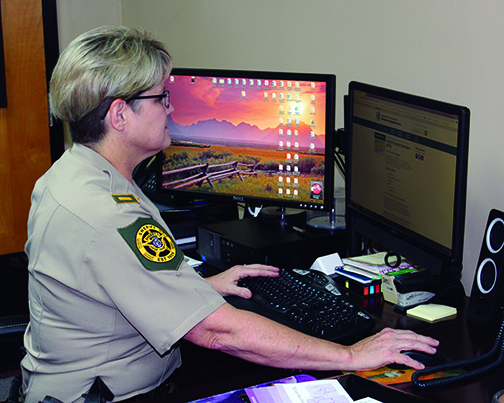 ‘Tis the season for scammers and crooks to take advantage of the unaware. The victims are often the elderly, but holiday con artists don’t discriminate by age.

People who exploit or abuse the elderly operate all year long, and it happens a lot more often – and to a lot more people – than one might expect, said Lt. Teresa Miller, the chief of the Crisp County Sheriff’s Office criminal investigations division.

“In fact, we had two reports today where overseas scam artists have called elderly people and made them believe they’re winning a car, and all they have to do is send a Western Union money order for $399 to pay the taxes,” Miller said. “Often in the case of at-risk elderly, they want to believe what [scammers] are telling them.”

Elder abuse is a crime that has become more prevalent as our population ages, and it takes many forms. It could be physical or sexual abuse, emotional abuse, neglect, and financial exploitation.

And, especially in the case of financial exploitation, the victims often know the perpetrators.

“Financial exploitation is the most prevalent,” Miller said. “We see family members who have control of their own parents or grandparents’ finances and then use those funds for their own financial gain rather than just taking care of the elderly person. That requires a very in-depth investigation.”

Investigating financial exploitation of an elder takes patience and expertise because it could be years before anyone learns a crime is happening.

“In many cases financial exploitation can mean hundreds of thousands of dollars, because it can go on for so long until someone catches on,” Miller said. “The elderly person has no idea something bad is happening to them.

Allan York knows this first-hand. He has a personal relationship with at least two elderly women who have been financially exploited, one of whom was taken advantage of by someone over the phone and another who was scammed by someone face-to-face.

“Financial abuse is affecting these elderly citizens right before our very eyes. There’s a lot of people suffering from it, and we need to put a spotlight on this problem,” York said.

In the case of the woman who was victimized by someone she knows, the financial exploitation was just the beginning of her problems.

“We’ve seen a financial, a mental and a physical strain on her. Her medicines were tampered with, and she almost died. That’s nothing compared to what she lost monetarily,” York said.

Investigators take financial exploitation of the elderly very seriously and work hard with each case to see that perpetrators are punished, but they go into overdrive when it comes to physical abuse or worse.

“If we find any physical abuse, they’re going to jail. It makes the crime ‘high and aggravated’ if you abuse anyone over the age of 65. Physical or sexual abuse of an elderly person is not going to be tolerated,” Miller said.

You can find out more about elder abuse by going online to aging.georgia.gov/abuse-neglect-and-exploitation-risk-adults-georgia or contacting the state Division of Aging Services’ Adult Protective Services at 1-866-552-4464.