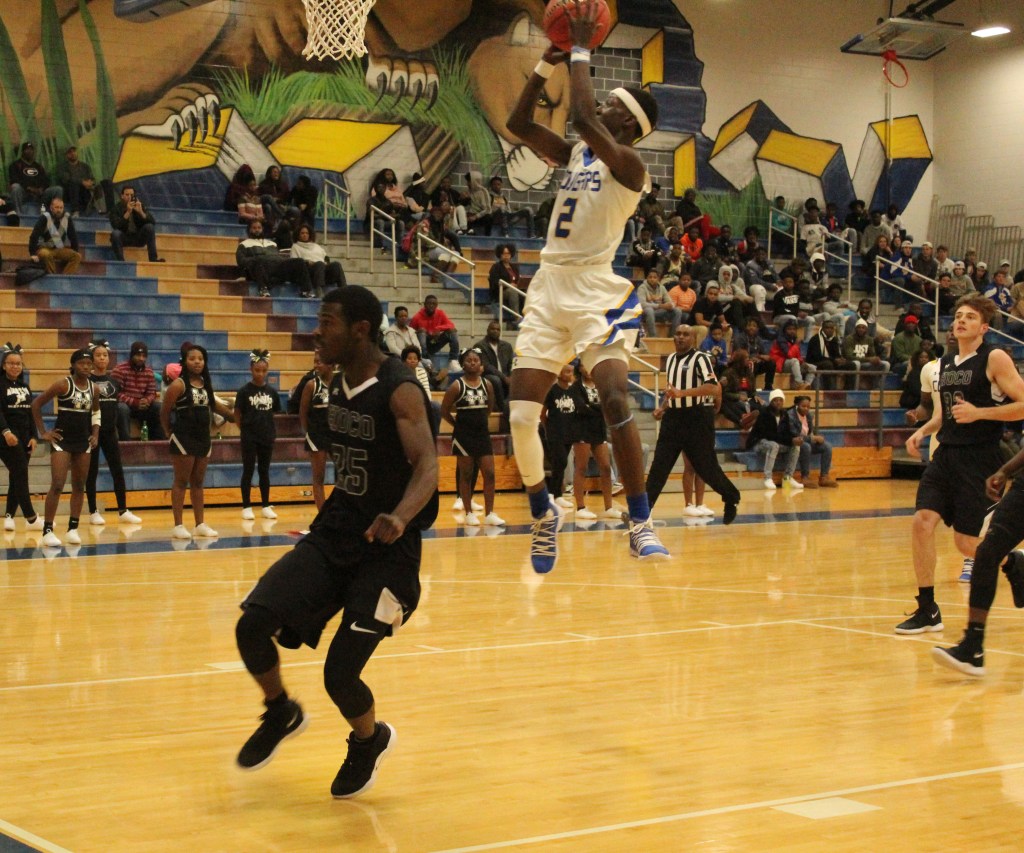 Crisp County's Malik Hall (2) drives to the basket for a layup during Tuesday night's game against Houston County. Hall led the Cougars on the night with 11 points, seven rebounds, four assists, and six steals.

CORDELE— The Crisp County High School basketball teams hosted Houston County for early season matchups on Tuesday night in Cordele. Houston County made a late fourth quarter run to steal a win from the Cougars in the boys’ game to complete the sweep after having won the girls’ game earlier that night.

The Cougars started out the game with a 9-4 scoring run in the first quarter behind a three-point shot by Malik Hall, two close range baskets from Ty McKenzie and a put back layup from Nathan Willis. McKenzie added another couple of scores later in the period, while Willis tacked on two more points with a jump shot and KJ Williams added a free throw. The Cougars had a 16-14 lead entering the second quarter.

Crisp started the second period with a 9-0 run after a bucket plus a free throw by PJ Coleman, and three two-point shots from Hall.

Houston closed the gap shortly after by finishing the first half with a 14-9 scoring run. McKenzie had three of the nine points during that stretch for Crisp on a layup and a free throw, while Willis, Williams and Damion Cross each had a two-point basket for the other six points. Crisp was ahead 34-28 at halftime.

Houston closed the gap a little more in a very defensive third quarter that saw the Bears outscore the Cougars 11-6. Three of those six Crisp County points came on a three-pointer from Williams, and Cross added the other three points with a layup and a free throw. The Cougars maintained the lead at 40-39 going into the fourth quarter.

Houston County took their first lead of the night early in the fourth quarter with a three-pointer, but the Cougars answered with an 8-2 scoring run to get back in front near the halfway point of the period. Willis scored four of the eight points in that run on shots assisted by Coleman and Williams. Hall and Williams each had a bucket for the other points during that stretch that saw the Cougars get back in front 48-44 near the four and a half minute mark of the final period.

A bucket and a free throw from Tubby Spivey shortly after put the Cougars in front 51-46, but Houston outscored Crisp 10-3 over the final minutes of the game to escape the Cougar Den with a 56-54 win. Coleman had those final three points of the night for Crisp. The Cougars had one final chance to send the game into overtime with less than six seconds to go, but they were unable to get a shot to fall.

The Houston Lady Bears defeated the Lady Cougars in the girls’ game earlier in the night by a final score of 42-21.

The Crisp County teams will be in Rochelle on Friday afternoon for games in the Wilcox County Tipoff Classic. The Lady Cougars will play Dodge County at 4 p.m. with the Cougars to follow versus Dodge at 5:30.