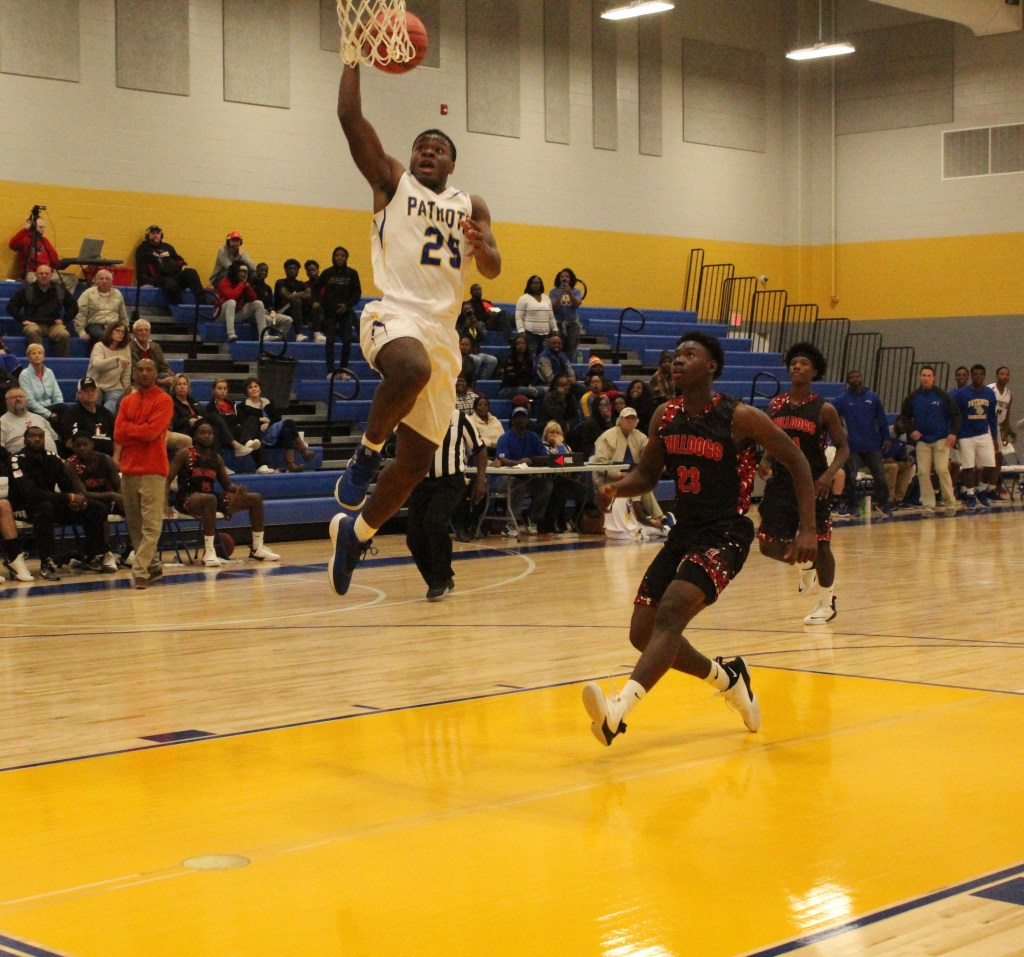 Desmond Tisdol goes up for a dunk to finish off a Wilcox County fast break during Wednesday night's Patriot win over Lanier County.

ROCHELLE— The Wilcox County basketball teams opened up their new gym with region games against Lanier County on Wednesday night. The Lady Patriots held off a Lanier fourth quarter comeback attempt for the win in their game, while the Patriots later pulled away from the Bulldogs in the second half of their contest to complete the region sweep.

Wilcox was ahead of Lanier County at the end of the first quarter 14-7. Alayshia Dixon and Destiny Tisdol both had four points in the first period, while Asia Montgomery and JaMerical Marshall each had three points in the quarter.

Lanier outscored Wilcox 16-15 in the second quarter, but the Lady Patriots were ahead 29-23 at halftime. Second period scorers for Wilcox were Dixon with six points, Marshall with four, Tisdol with two, Nicole Rucker with two, and Monica Carter with one.

The Lady Patriots subsequently outscored Lanier 19-12 in the third period. Tisdol had nine points in the quarter and Dixon pitched in with six, while Marshall and Montgomery each had a two-point basket in the quarter. Wilcox led 48-35 entering the final quarter.

Lanier County made a big run in the fourth quarter to cut the Wilcox lead down to 61-60 with less than 40 seconds to go, but Tisdol knocked down a late three-pointer that helped to preserve the lead for Wilcox. Marshall and Rucker both also knocked down three-point shots in the quarter and combined for 10 points to help the Lady Patriots hold on for a 64-60 win.

Dixon and Tisdol were the leading scorers for the Lady Patriots in the game with 18 points each. Other Wilcox scorers in the game were: Marshall- 14 points, Rucker- seven, Montgomery- six, and Carter- one.

Lanier County took an early 6-4 lead against Wilcox in the first few minutes of the boys’ game but the Patriots responded with a big 13-2 run shortly after to build a 17-8 lead entering the second period. Desmond Tisdol put in eight points for Wilcox during the first period, while Cameron Patterson hit a three-pointer. Azavion Deans, Jordan Brown and Keyshawn Howard each added a two-point basket apiece during the first quarter.

A fast break dunk from Tisdol highlighted the second quarter action, but the Bulldogs outscored Wilcox 20-13 in the quarter. The other 11 Patriot points in the second period came off of two layups by Deans, another three-pointer by Patterson, three total points by Demetric Young and a free throw by Curtis Leflore.

The Patriots stretched their lead back out to 54-47 heading into the fourth quarter by outscoring Lanier County 24-19 during the third period. Brown led the Patriots in the quarter with nine of the 24 points scored. Tisdol added six more to his total in the third, while Young and Deans combined for the other nine Wilcox third quarter points.

Wilcox piled on to their lead by outscoring Lanier 25-14 in the fourth quarter for the final score of 79-61. Howard had 10 of the 25 Wilcox points in the fourth period, while Tisdol, Young, Patterson and Arquavious Miller all chipped in with scores as well.

Wilcox will be hosting tournament games on Friday night against Fitzgerald High School at 7 and 8:30 p.m. Following that the Patriot teams will be hosting Dooly County on Saturday night with the girls’ game to be played at 7 and the boys’ game to follow.