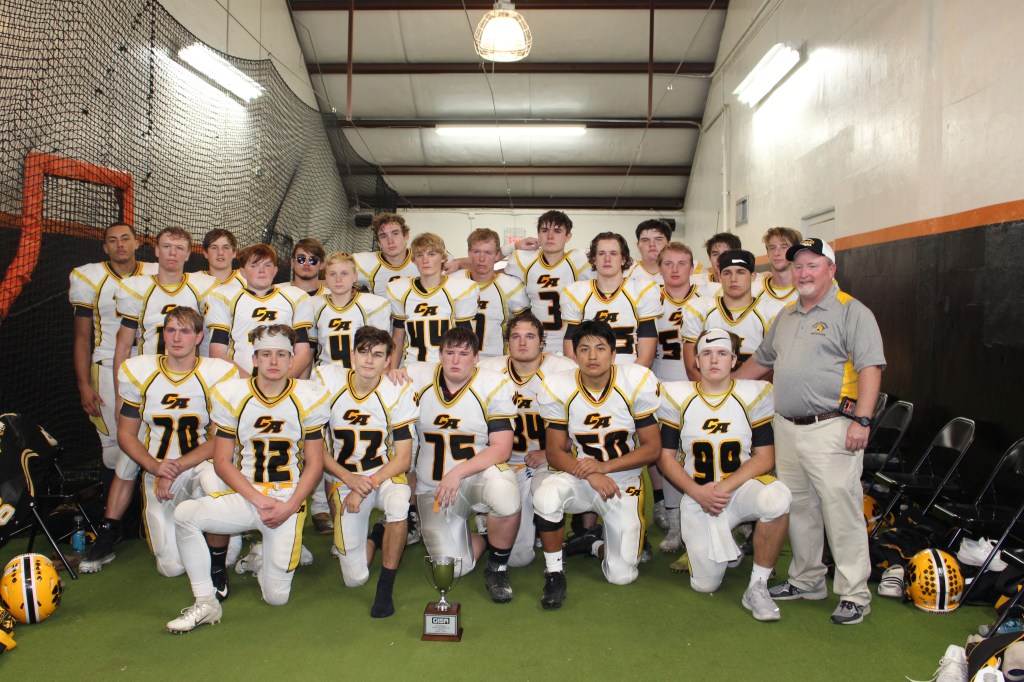 The 2018 Crisp Academy football team and Head Coach Price Jones are pictured with the GISA class A state runner-up trophy after the conclusion of Friday afternoon’s state title game at Mercer University.

MACON- The Crisp Academy Wildcats were in Macon at Mercer University on Friday afternoon for the GISA class A state football championship game against Flint River Academy. The two teams battled all afternoon before Flint River was able to secure the 25-20 victory with a defensive stop in the final minute of the game.

Crisp received the opening kickoff and came out throwing the ball shortly after. Quarterback Griffin Gravitt completed passes to Trey Williams, Dylan Farmer and Baylor Pless on the opening drive, but Flint River eventually held CA to a punt.

Flint River went to work with their rushing attack on the subsequent possession and eventually capped off a seven-play drive with a touchdown pass from Hugh Barbee to Bora Certel. The extra point attempt that followed was wide left leaving Flint River with a 6-0 lead at the 8:02 mark of the first quarter.

Crisp Academy was forced to punt on their next offensive possession and Flint River started to put together another drive after taking over. The CA defense forced Flint River to stall out near midfield, however, as Will Hubbard came up with a deflection on a third and long pass attempt. The two teams then swapped a few more punts over the next couple of possessions.

Crisp took control of the ball with 53 seconds left in the first quarter after a punt by Flint River. The CA offense then put together a nine-play, 63-yard scoring drive over the next few minutes to tie the score. The key plays on the scoring possession were a 10-yard run by Griffin Gravitt for a crucial third down conversion, a couple of short passes to Noah Mercer, and a 36-yard pass connection from Gravitt to Farmer. The touchdown came on a third and goal pass from Gravitt to Farmer for a four-yard score. The two-point conversion try was unsuccessful so the score was tied at 6-6 with 9:58 to go in the second quarter.

The CA defense held Flint River to a quick punt after the ensuing kickoff. Billy Hardin, Austin Cobb, and Dede Lawrence all came up with tackles for Crisp on the defensive stand, and Garrett Gravitt came up with a sack on third and long to force the punting situation.

Crisp had to punt the ball right back shortly after, however, and Flint River grabbed the lead once more on a long scoring drive that ended in a short touchdown run by Barbee. Flint River had a 12-6 lead with 2:02 to play in the first half.

Crisp Academy started the next drive at their own 25-yard line after a short return by Cobb and they later took the lead into halftime using an 11-play, 75-yard drive. Gravitt threw passes to Mercer, Williams, Pless and Farmer to move the CA Wildcats down inside the Flint River 20-yard line. From there Gravitt threw a fourth down pass to Pless for an 11-yard touchdown with eight seconds to go in the first half. Gravitt threw to Williams for the subsequent two-point conversion to put Crisp ahead 14-12 going into the halftime break.

Flint River jumped back in front just eight plays after the second half kickoff on a 16-yard touchdown pass from Barbee to Tanner Gilbert. The Wildcats of Flint River were ahead 18-14 with 9:07 to go in the third quarter.

CA was forced to punt the ball on their next drive, but their defense came up with a quick stop to force another Flint River Academy punt. Aubrey Brown and Cooper Folds led the charge with a couple of key tackles on the Crisp Academy defensive stand.

The ensuing CA drive started out as a promising one after a 24-yard completion to Pless and a Flint River pass interference penalty, but a holding call on CA followed by a fumbled snap forced them back into a punting situation.

Flint River took advantage of the stop, as nine plays later they tacked on another touchdown on a 17-yard run by Barbee. The extra point that followed was good this time, leaving the Flint River Wildcats with a 25-14 lead at the 10:53 mark of the fourth quarter.

The next Crisp Academy drive came to an end with a punt attempt but Flint River fumbled possession of the ball away on the return and Hardin was credited with the fumble recovery after a wild sequence.

CA had a touchdown taken of the board shortly after due to a holding penalty, and Flint River took the ball away on the next play with an interception in their own territory.

Flint River ate up a good portion of the remaining eight and a half minutes on their next drive. The possession included a touchdown run that was called back due to a holding penalty, and the CA defense then took advantage of the penalty by forcing a turnover on downs inside their own 15-yard line just three plays later. Farmer, Garrett Gravitt and Lawrence all recorded tackles on the drive, while Hardin and Folds combined for the stop on the big fourth down play.

The CA offense took over at their own 11-yard line with 4:06 to play in the game and scored a touchdown in less than two minutes. The scoring possession included a 16-yard run by Griffin Gravitt and big pass plays to Mercer for 23 yards and Pless for 22. The touchdown drive was finished off with a 19-yard touchdown pass from Griffin Gravitt to Pless. The two-point try was no good, so CA trailed 25-20 with 2:17 to play.

Crisp Academy’s subsequent onside kick try was recovered by Flint River, but their attempt to run out the remaining time was cut short when they fumbled the ball and Pless recovered it for CA with 1:20 to go in the contest.

The Crisp offense started the ensuing drive at their own 39-yard line but Flint River came up with the game-sealing defensive stop on a fourth down play shortly after.

Flint River ran out the remaining 56 seconds from there with a couple of kneel downs to hold on for the 25-20 state championship game victory, leaving the Crisp Academy Wildcats as the class A state runners up for the 2018 GISA football season. 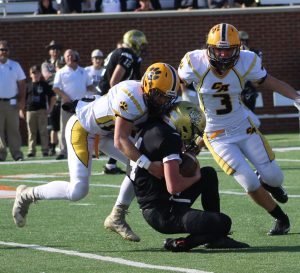 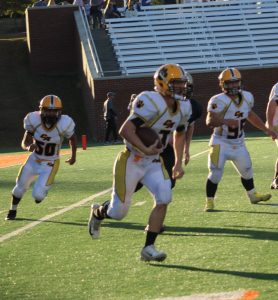 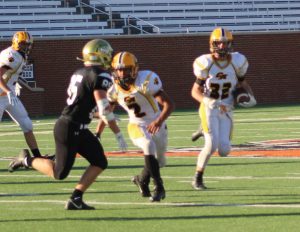 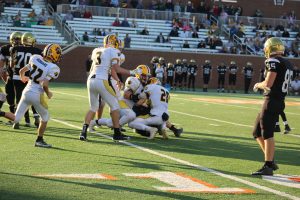 CA Wildcat defenders Billy Hardin (20) and Cooper Folds combine for a stop late in Friday’s games. CA’s Trey Williams (3) and Will Hubbard (22) are also pictured closing in on the play.