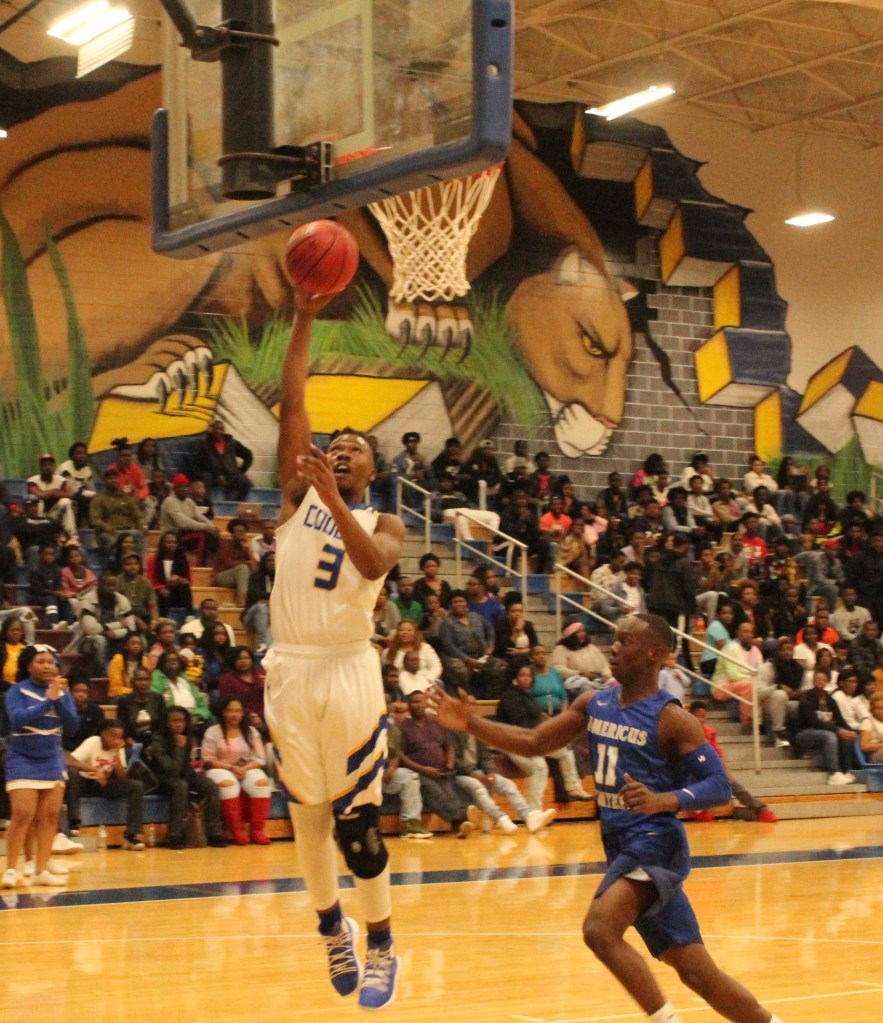 Ty McKenzie (3) gets to the basket for a score during Saturday night’s CCHS game against Americus-Sumter. McKenzie led the Cougars in scoring on the night with 21 points.

The Cougars kept the game close throughout the first quarter and a half, but a big second quarter run from the Americus Panthers helped them take control of the game on their way to a 74-51 win.

After Americus opened up the game with the first points of the night on a two-point shot, PJ Coleman got the Cougars on the board with a three-pointer for an early Crisp 3-2 lead. Scores from Ty McKenzie helped the Cougars out to a 7-4 lead soon after, but Americus went on an 11-2 run using three three-point shots. Cortez Thomas had the lone two points in that stretch for Crisp County.

The 11-2 scoring run had Americus in front 15-9 late in the first period but the Cougars answered shortly after with a layup from Coleman and five more points from McKenzie by way of a fast break layup and a three-point basket. Americus was in front 19-16 entering the second frame.

KJ Williams hit a baseline jumper for the Cougars to cut the Panther lead to 19-18 early in the second, but Americus took control of the game from there by outscoring Crisp 31-5 for the remainder of the period. The Cougars trailed by a score of 50-23 going into the halftime break.

The teams swapped scores for the entirety of the third period resulting in 16 points for each team, so the Americus-Sumter lead was at 66-39 entering the final quarter. Six of the Crisp County points in the third quarter came on three layups from Tubby Spivey, while Thomas and Nathan Willis each pitched in with four apiece and McKenzie added to his stat line for the game with the other two points.

The Cougars closed the gap in the final period by outscoring the Panthers 12-8, but Americus-Sumter won the game by the final score of 74-51. McKenzie added six more points to his total for the game in the final quarter, while AJ Lofton added four of the 12 points and Coleman added the other two points to round out the Cougar fourth period scoring.

McKenzie ended the game with a total of 21 points to lead the Cougars in scoring. Other Crisp point totals for the game: Coleman- seven points, Thomas- six, Spivey- six, Willis- five, Lofton- four, and Williams- two.

The Cougars will be in tournament action in Albany at Monroe High School later this week (December 20-22) starting with a game against Statesboro (8-1) at 5:30 p.m. on Thursday afternoon. Following that, they play Colquitt County Friday afternoon at 2:30 in Albany, and then against Dougherty County on Saturday night at 7 p.m. 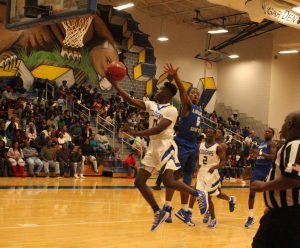 Crisp County guard PJ Coleman gets behind the Americus defenders as he drives to the basket for a layup during Saturday’s game.