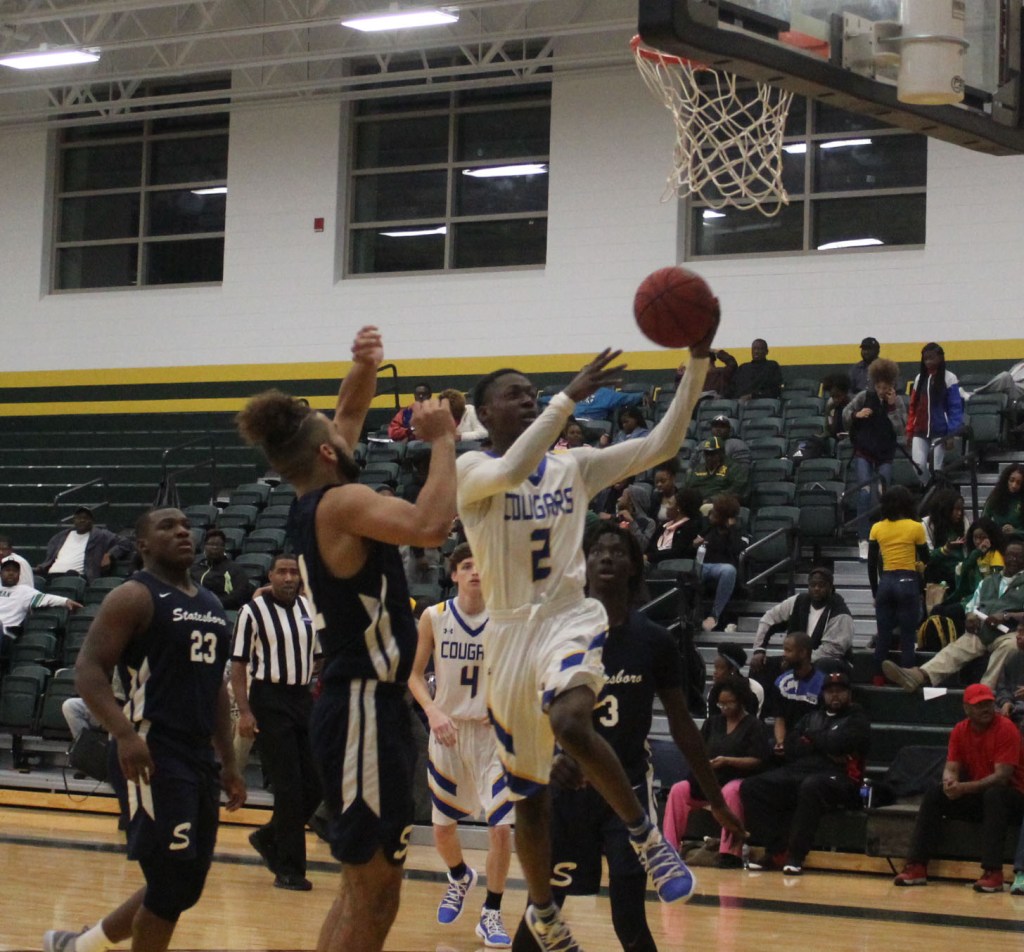 Crisp County senior Malik Hall (2) drives to the basket for a layup during Thursday’s game against Statesboro.

ALBANY— The Crisp County boys’ varsity basketball team opened tournament action in the U-Save It Classic in Albany at Monroe High School on Thursday night with a game against the Statesboro Blue Devils (8-1).

The Cougars trailed by as many as 17 points halfway through the second quarter before fighting their way back into the game in the second half, but the Blue Devils were able to hold on for a 64-56 win in the end.

Ty McKenzie got the Cougars on the board first with a corner three early in the first quarter, but Statesboro subsequently put together a 14-0 scoring run to take control of the game in the period. Cortez Thomas snapped the scoring run with a layup and McKenzie later added another point with a free throw, but the Blue Devils were in front 22-6 at the end of one quarter played.

Crisp responded with a solid effort in the second period, in which they outscored Statesboro 19-12. Seven different Cougars got on the score sheet in the quarter, led by Malik Hall with six points. Tubby Spivey had four of the points, while Thomas, KJ Williams, Nathan Willis, Jayren Fox and Willie Poole combined for the other nine Cougar points in the period. Crisp trailed 34-25 at halftime.

Third quarter action saw Statesboro stretch the lead out to 46-31, but the Cougars put together a 6-0 run over the last two minutes of the period to pull themselves closer going into the fourth quarter. Willis had four points for the Cougars in the third on a couple of free throws and a jump shot, while PJ Coleman, Spivey, Williams, and Damion Cross each added baskets in the quarter. Statesboro had a 46-37 lead going into the final period.

An early fourth quarter score by Spivey cut the Blue Devil lead to seven points, but Statesboro countered with an 8-2 scoring run shortly after to get back in front by a score of 54-41.

Poole knocked down a three pointer with five minutes to go to get the Cougars back within 10 points of the lead and a basket by McKenzie followed by a layup from Coleman left Crisp trailing by six points with just over four minutes to go in the game.

Statesboro built their lead back up to 58-48 with just two and a half minutes to play, but the Cougars fought their way back to within four points of the lead over the next minute of play. Thomas, Coleman, and Williams each scored on layups during that stretch, and Crisp trailed 58-54 with 1:36 left on the clock, but Statesboro held on for the win by outscoring the Cougars 6-2 over the remaining time left in the contest, leaving the final score at 64-56 in favor of the Blue Devils.

Thomas, Spivey and Hall were the leading scorers in the game for Crisp County with eight points each. Other Cougar final point totals: McKenzie, Willis, and Coleman- six point apiece, Poole and Williams- five each, Cross and Fox- two points each.

Crisp County continued play in the tournament in Albany on Friday afternoon with a win against Colquitt County, and then the Cougars finished out their schedule in the tournament with a Saturday night win over Dougherty County. Recaps of those two tournament games can be viewed here: https://www.cordeledispatch.com/2018/12/24/cougars-knock-off-colquitt-and-dougherty-in-albany-holiday-hoop-tournament/ 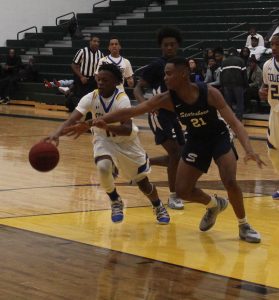 Crisp County’s Damion Cross (11) fights off a Statesboro defender to maintain possession of the ball during Thursday’s tournament game in Albany. 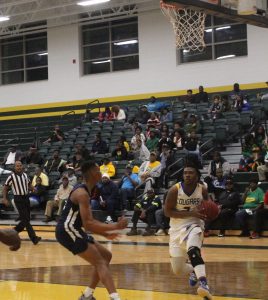 Crisp County’s Ty McKenzie (3) drives the ball into the paint against Statesboro during Thursday’s game.