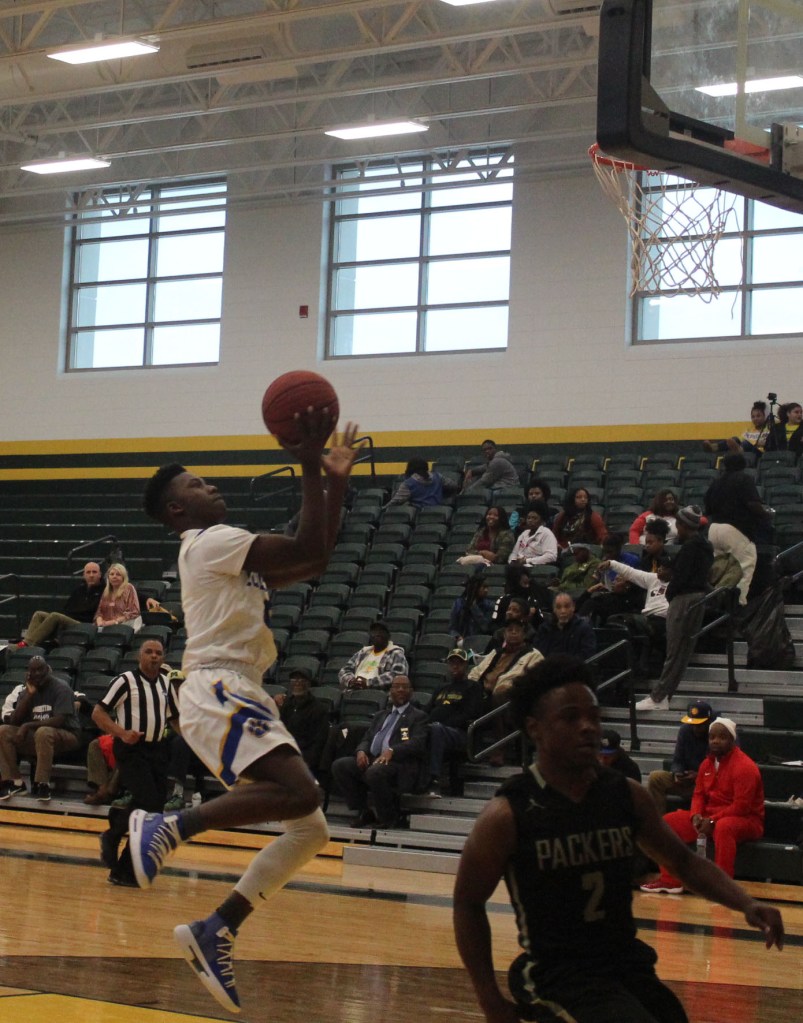 Crisp County’s PJ Coleman drives to the basket for a score against Colquitt County during Friday’s game.

ALBANY— The Crisp County varsity boys’ basketball team picked up wins in the U-Save It Pharmacy Classic at Monroe High School in Albany over the weekend. After falling to Statesboro in their first game of the tournament on Thursday night, the Cougars bounced back to defeat Colquitt County 41-39 on Friday afternoon, and Crisp then knocked off Dougherty County 74-72 on Saturday night.

The Cougars defeated Colquitt County 41-39 in a hard-fought game that was close throughout in Friday’s tournament action in Albany.

Crisp got scores from Jayren Fox, Tubby Spivey, Ty McKenzie and PJ Coleman in the first quarter but trailed 10-9 at the end of the period.

The second quarter saw both teams swap scoring runs and a couple of lead changes. Colquitt was in front 27-19 late in the period, but the Cougars finished the first half on an 8-0 scoring run, with points from Coleman, Damion Cross, Spivey and Courtney Griffin, to tie the score at 27 apiece going into halftime. Cortez Thomas, KJ Williams and Willie Poole had each contributed earlier in the quarter with baskets as well.

Colquitt outscored Crisp 7-4 in a low scoring third quarter in which both teams stepped up the defensive effort. Williams scored all four of the Cougar points in the period on a couple of fast break layups. The Cougars trailed 34-31 going into the fourth quarter.

The stifling defense continued into the fourth quarter, but the Cougars made their important possessions count down the stretch as they outscored Colquitt 10-5 over the course of the final quarter.

Spivey opened the fourth quarter scoring for the Cougars with a layup, and AJ Lofton made two free throws shortly after to grab Crisp a 35-34 lead early in the period. Colquitt retook the lead on their next possession, but the Cougars got back in front two minutes later on a steal followed by another fast break layup from Williams.

A Colquitt County three-pointer on the next possession put the Packers ahead 39-37 with four minutes to go in the contest, but that was ultimately their final score of the game.

McKenzie tied the score with a layup on the next Crisp County possession, and Coleman hit a big step back jumper with just over two minutes to go to give the Cougars a 41-39 lead. The Cougars then forced a couple of big Colquitt turnovers over the final two minutes to hang on for their second win of the season by the final score of 41-39.

Coleman led the Cougars in the game with nine points and Williams was close behind with eight, while Spivey was next with six. Other Cougar point totals: Thomas and McKenzie- four points each, Fox- three, Cross, Poole and Lofton- two each, Griffin- one.

As a team the Cougars had 19 total steals with Spivey and McKenzie leading that stat category with four each, followed by Williams and Cross with three each.

The Cougars got the offense going in Saturday’s 74-72 win over Dougherty County in Albany.

Crisp scored 22 points in the first quarter on their way to a 22-12 lead over Dougherty after the first period. The Cougars were up at half 43-36 and they held off a big Trojan comeback attempt in the second half to pick up their third win of the year.

Crisp shot 55% from the field, 30 made shots on 55 attempts, over the course of the contest and netted seven three-pointers out of 14 attempts. Nathan Willis knocked down four of the seven threes, while Coleman made two and McKenzie had the other long distance basket.

McKenzie finished with a double-double, posting 19 points and 11 rebounds, plus an assist, a rebound and a block. Willis finished with 14 points, five rebounds, and three blocked shots. Coleman also had 14 points to go with two rebounds, three assists and a steal.

The Cougars will continue their Christmas break game schedule with a home game against Wayne County on Friday at 5:30 p.m., followed by a trip to Dooly County on Saturday with tip-off scheduled for 7:30. 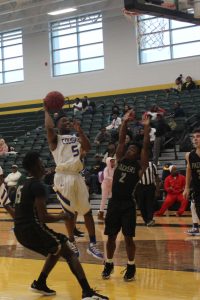 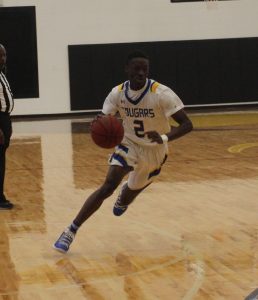 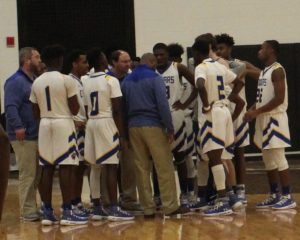 Crisp County coaches and players discuss strategy during a timeout in Friday’s game against Colquitt.