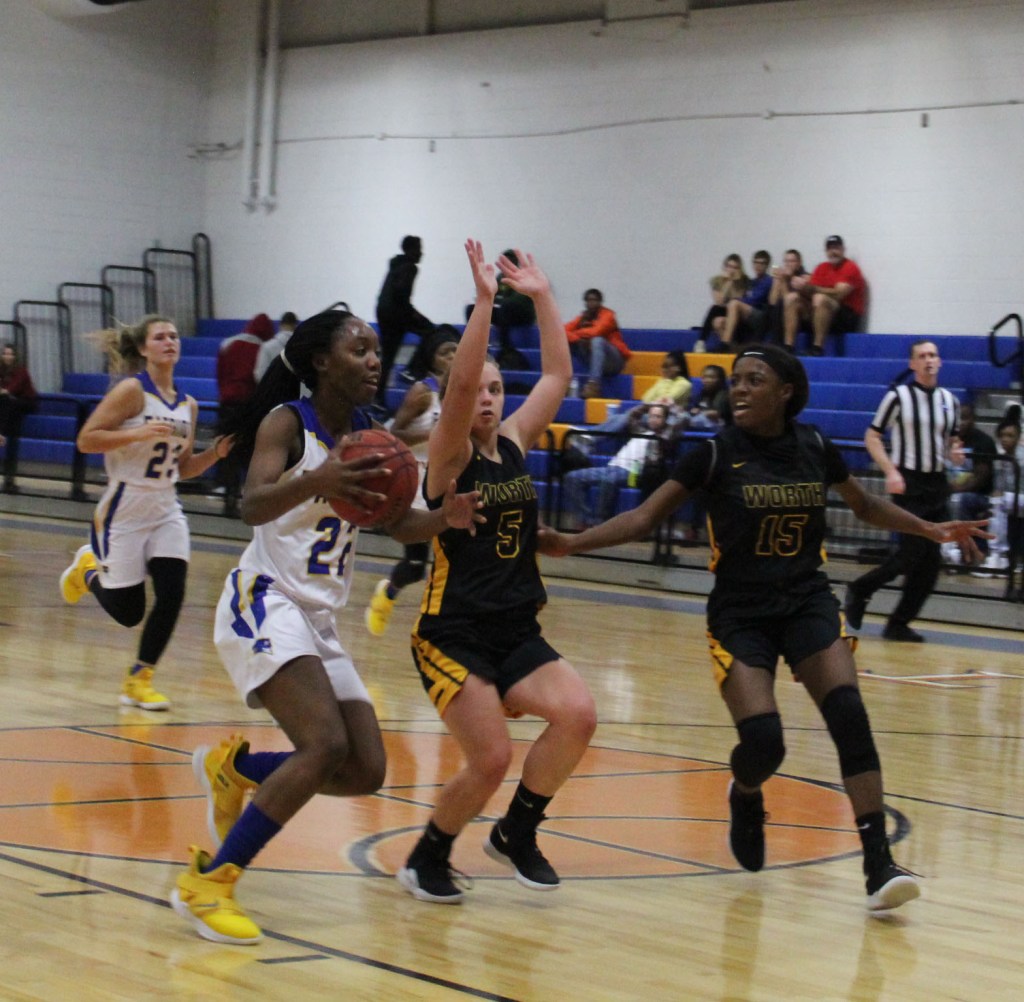 Wilcox County High School senior JaMerical Marshall dribbles the ball up the floor as she leads a Lady Patriot fast break attempt during Thursday afternoon's win over Worth County.

ASHBURN— Wilcox County High School’s varsity basketball teams were in action on Thursday afternoon at Turner County’s Ronalda Pierce Holiday Classic tournament. The Patriot teams matched up with Worth County on the day and came away with a split. The Wilcox girls defeated Worth County 54-41, while the Worth County Rams gave the Wilcox boys their first loss of the season by a score of 73-65.

The Wilcox girls were in front 12-9 at the conclusion of the first quarter in their game. Alayshia Dixon had six points in the first period for Wilcox on two made free throws and a couple of layups, while Asia Montgomery added four points and JaMerical Marshall scored the other two.

The Lady Patriots brought the lead out to 30-13 going into halftime after outscoring Worth 18-4 in the second quarter. Marshall scored six of the 18 Wilcox points in the quarter on a pair of fast break layups and two free throws. Destiny Tisdol pitched in with four points in the quarter, while Montgomery, Dixon, Monica Carter, Markeila Howard and Mackenzie White combined for the other eight.

The two later kept the momentum going for Wilcox, as they put up 14 out of the 17 Wilcox points in the fourth quarter. Their efforts helped the Lady Patriots outscore Worth 17-10 in the final period. Tisdol had the other three points of those 17, and the Lady Patriots finished on top by the final score of 54-41 for their ninth win of the season.

Marshall finished the game with 21 points and Dixon put up a total of 16. Other Lady Patriot point totals in the game: Tisdol- seven points, Montgomery- six, Howard- two, Carter- one, and White- one.

The Worth County Rams jumped out to a big lead early in the boys’ game by outscoring the Patriots 20-6 in the first quarter.

Worth County maintained their 14-point lead heading into halftime as both teams scored 13 points in the second quarter. Six of those 13 second quarter points from Wilcox came on two three-point baskets made by Jordan Brown, while Keyshawn Howard posted five points in the period and Monterrius Edmond tipped in a missed shot for the other two Patriot second quarter points. Worth was ahead 33-19 going into halftime, but the momentum flipped to Wilcox shortly after the break.

The Patriots opened up the second half with 17 consecutive points in less than two and a half minutes of game time to take a three-point lead at the 5:33 mark of the third period. Defensive pressure by the Patriots led to several Worth turnovers that helped spark the 17-0 scoring run. Brown knocked down three three-pointers for nine of the 17 points during the run, while Howard scored four of the points on a couple of layups. Azavion Deans and Demetric Young each put up two points during the run for the remainder of the 17.

The Rams snapped their drought shortly after to make the score 36-35, but Wilcox came right back with seven consecutive points to go in front 43-35. Cameron Patterson scored a layup for the first two, Howard then knocked down a three, and Deans hit a jump shot to cap the quick 7-0 run.

The teams swapped small scoring runs over the last three and a half minutes of the third quarter, and Wilcox was in front 53-48 going into the fourth period. The Patriots outscored the Rams 34-15 in the third period with 15 of those points coming from Brown, seven coming from Howard, five each from Young and Deans, and the other two from Patterson.

The fourth quarter saw the momentum swap back and forth between the two teams several more times.

Howard made an early fast break layup to get the Patriots back in front by seven, but Worth scored the next four points to make the score 55-52 at the 7:05 mark of the fourth period.

Wilcox followed by scoring six consecutive points on buckets from Patterson and Howard, leaving the Patriots in front by a nine-point margin at 61-52.

Worth countered with a 9-1 scoring run over the next couple of minutes, leaving Wilcox in front 62-61 with four minutes and 11 seconds to play in the game.

Patterson extended the Wilcox lead to 65-61 with a three-point basket with 3:53 to go in the game, but Worth finished the contest on an 11-0 scoring run from there to come away with the 73-65 win to hand the Patriots their first defeat of the season, leaving them at 11-1 at this point in the season.

Both Wilcox teams will play their next games at Dooly County on Thursday, January 3. 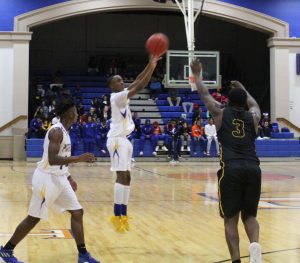 Wilcox County’s Jordan Brown releases a three-point attempt during Thursday’s game against Worth. 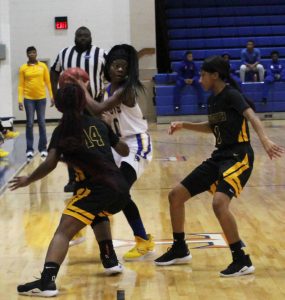 Wilcox County’s Destiny Tisdol looks for an open teammate to pass the ball to as two Worth County defenders apply pressure.