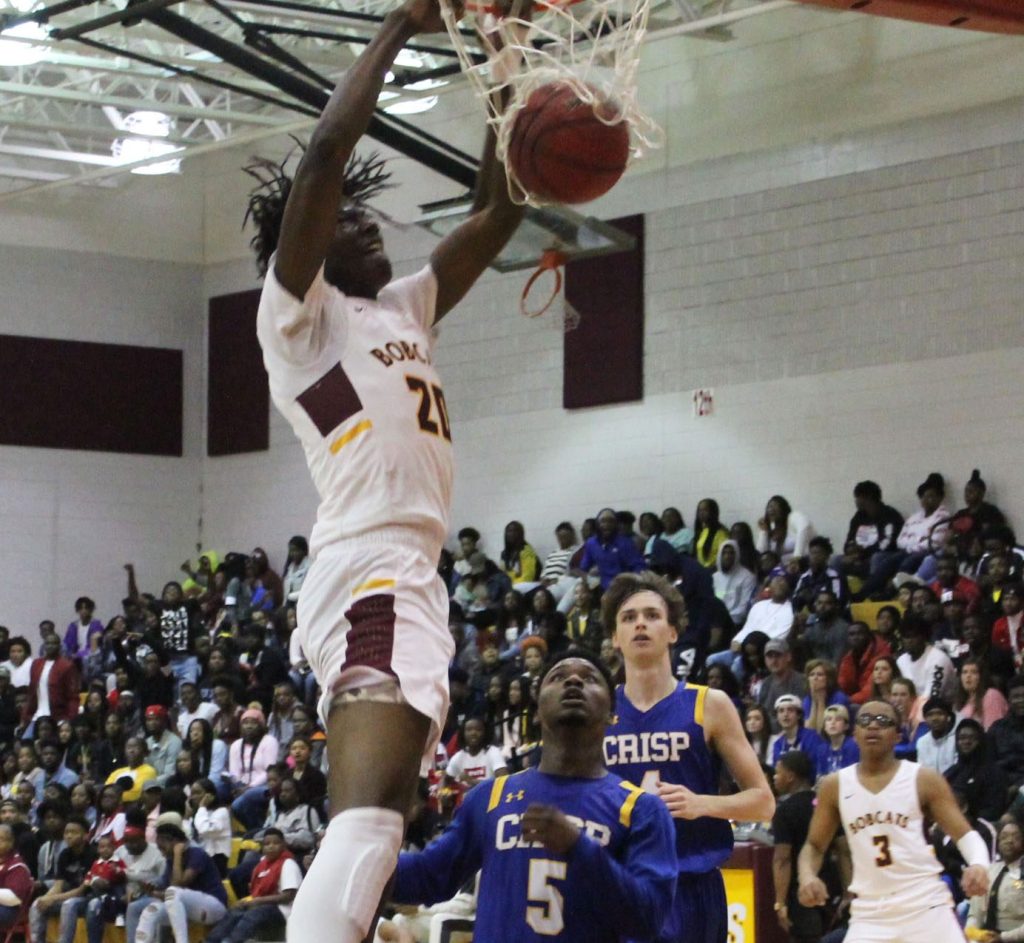 Dooly County's Zeff Felton finishes a dunk during the first half of Saturday's 58-57 Bobcat win over Crisp County.

VIENNA— Crisp County and Dooly matched up on Saturday night in Vienna for their final basketball games on the schedule for the 2018 calendar year. Dooly won the girls’ contest 68-49 and the Bobcats came up with a thrilling win in the boys’ game later on that night by a final score of 58-57 in a game that came down to the final possession.

The two teams opened up the boys’ varsity game by trading small scoring runs, and Dooly finished the first quarter with an 8-3 scoring run to take a 20-14 lead into the second period.

Zeff Felton was the overall leading scorer in the quarter with nine of those 20 Dooly County points. Rashad Lucas, Jeff Felton and Towandi King combined for the other 11 Bobcat points in the first period.

Ty McKenize led Crisp in the first quarter with five of the 14 points, while KJ Williams, Malik Hall, and PJ Coleman also got on the score sheet in the quarter for Crisp.

The teams were scoreless for the first three minutes of the second quarter until Jeff Felton made a layup for Dooly at the 4:50 mark, and he later made a free throw to increase the Dooly lead to 23-14.

Tubby Spivey then got the offense going for the Cougars later on in the period with six straight points coming by way of three layups, which cut Dooly’s lead to 23-20.

A Zeff Felton dunk got the Dooly crowd fired up shortly after, and a free throw from Tre Davis later put the Bobcats back in front 26-20 late in the first half.

Spivey followed by knocking down a couple of free throws to give him a total of eight points in the second period, and Williams made a layup off of a Crisp County steal with 10 seconds to go in the second quarter. The Bobcats went into halftime with a 26-24 lead.

Crisp outscored Dooly 4-3 in the first few possessions of the third period, but the Bobcats responded with a 10-0 scoring run from there to get in front 39-28 late in the quarter. Zeff Felton, Shamon Zanders, Lucas, Eric Ivory, and Jeff Felton all scored in the third for Dooly.

The Cougars closed the third quarter with a 6-0 run on scores by Nathan Willis, Willie Poole and Williams. Dooly maintained the lead at 39-34 entering the final period.

Crisp was able to cut the Dooly County lead down to 42-38 with a fast break layup from McKenzie with just over six minutes to go in the game. Dooly responded with a 10-1 scoring run with scores from Jeff Felton, Lucas, Zanders and Zeff Felton that put them in front 52-39 over halfway through the final quarter.

The Cougars were not finished yet, however, as they went on a 13-4 scoring run from there to cut the Bobcat lead to 56-52 with a minute and 12 seconds to go in the game. Hall scored on a couple of layups during that stretch for the Cougars, while McKenize added a layup and a free throw. Williams and Coleman both knocked down big three-point shots on the scoring run to keep the Crisp comeback attempt alive.

The Cougars then got back to within one point of Dooly County’s lead at 56-55 after a three-pointer by Poole with just 26 seconds to play in the game.

The Bobcats went two for four on free throws over their next two possessions to bring their lead out to 58-55 with less than 20 seconds to play.

Crisp got the ball up the court and took a timeout with around five seconds to go in the game, but their last second three-point shot attempt that would have potentially sent the game into overtime came up short. McKenzie did manage to get the ball into the basket at the buzzer off of a rebound on the missed shot to cut the Dooly lead to one-point for the final score of 58-57.

Zeff Felton led the Bobcats in scoring on the night with 18 points to go with 13 rebounds and five assists. Jeff Felton and Rashad Lucas were both in double figures for Dooly as well with 14 points and 12 points respectively. Other scorers for Dooly were Zanders with five points, Eric Ivory with four, King with three, and Reggie Smith with two.

McKenzie led the Cougars with 19 total points, while Williams was the only other Cougar player in double digits with 11. Other Cougar point totals from the game: Spivey- eight points, Hall- six, Poole- five, Coleman- four, Willis and Damion Cross- two each.

Earlier in the night, Crisp and Dooly were tied at 14-14 at the end of the first quarter of the girls’ contest.

The Lady Bobcats then pulled away soon after by outscoring Crisp 27-10 in the second period to go into the halftime break with a 41-24 advantage.

The teams both put up 16 points in the third quarter, and Dooly later outscored Crisp 11-9 over the course of the final period for the 68-49 win.

Tierra Burden led Dooly in the game with 13 points to go with four rebounds, three assists and six steals. Jashuma Greene scored 12 points for the Lady Bobcats, and Ta’kerria Lee finished with 11. Jasmine Clark pitched in with nine points.

Crisp and Dooly are scheduled for rematches on Saturday, January 26, starting at 6 p.m. in Cordele. 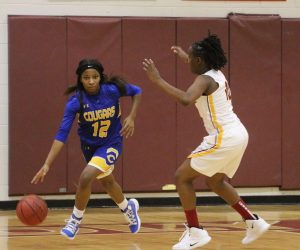 Crisp County guard Aaliyah Hardemon (12) dribbles the ball up the floor for the Lady Cougars during Saturday’s game. (Photo by Christy Bozeman) 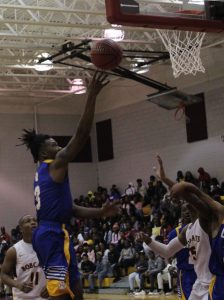 Ty McKenzie drives to the basket for a layup for Crisp County during Saturday’s game.