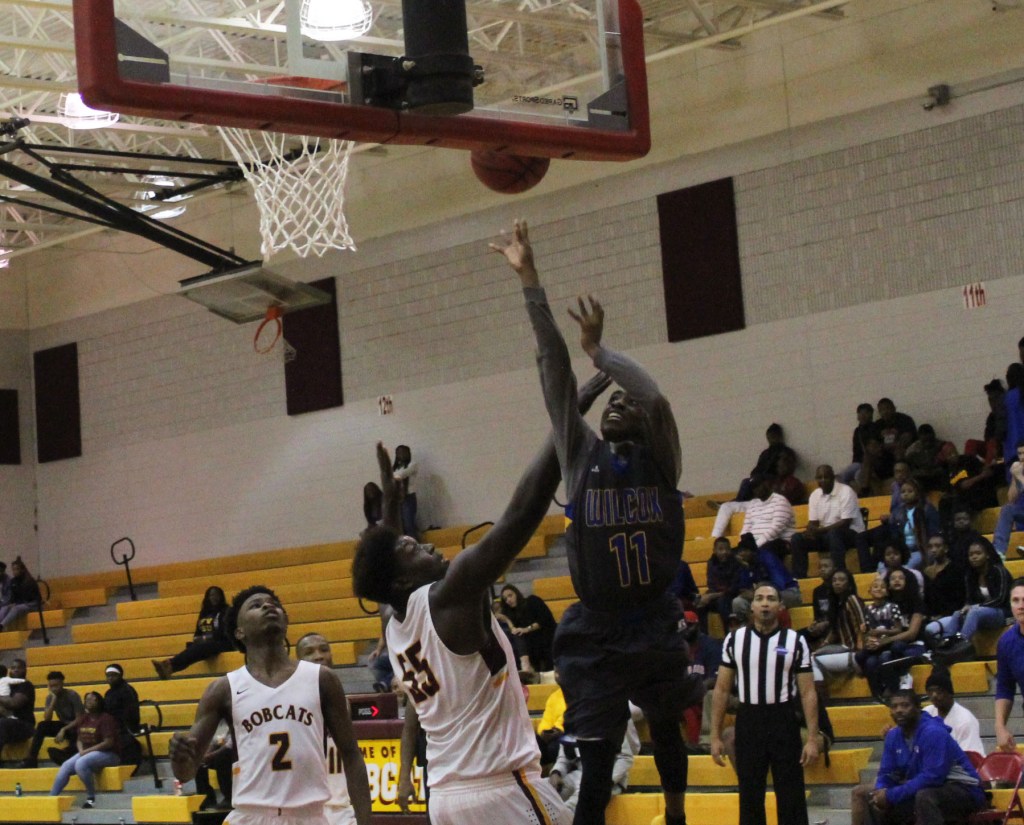 It was the second time the two local rival schools had matched up this basketball season, Wilcox having swept Dooly back in early December in Rochelle.

The Lady Bobcats came out victorious over Wilcox in the rematch game last night by a final score of 61-26. In the boys’ game, the Wilcox Patriots came up with a 67-65 win in what was a highly competitive and entertaining contest.

Dooly outscored Wilcox 17-9 in the first quarter of the girls’ contest last night. Ta’kerria Lee put up 15 of those 17 points for the Lady Bobcats. JaMerical Marshall scored five for Wilcox in the first quarter and Alayshia Dixon scored the other four Lady Patriot points in the period.

Dooly then took control of the game in the second quarter by outscoring Wilcox 15-5 for a 32-14 halftime lead. Lee, Tierra Burden, Jaliesha Wiggins, and Miracle Fields combined for all of the Lady Bobcat scoring in the period. Dixon, Markeila Howard, and Grace Lawson were on the score sheet in the quarter for Wilcox.

The Lady Patriots started the second half with an 8-3 scoring run to get back to within 13 points of the Dooly lead, but Dooly finished the third period on a 9-0 run to go into the fourth quarter with a 43-22 lead. Ty’tianna Williams, Burden, Sha’Nyah Bolden, Jashuma Greene, and Wiggins combined for the 12 third quarter points for Dooly County. The eight Wilcox points in the third quarter were split between Lawson, Destiny Tisdol, Marshall, and Erianna Hargrove.

Dooly finished the game by outscoring Wilcox 18-4, which resulted in the 61-26 final score line. Six different Lady Bobcats scored in the final period including Season Adams and Antanazsha Robinson.

Lee was the overall leading scorer in the contest with 20 points for the Lady Bobcats. Burden finished with a total of nine points for Dooly. Other Lady Bobcat scorers: Wiggins and Fields with seven points each, Greene- six, Bolden- five, Robinson- three, Adams and Jasmine Clark- two each, and Williams- one.

Marshall led Wilcox with eight points in the game and Dixon finished the game with six. Other Lady Patriots scorers: Lawson with five; Howard, Hargrove and Tisdol all with two points each; and Monica Carter with 1.

The first quarter of the boys’ game saw the lead change hands several times before the two teams went into the second quarter tied up at 16-16. Rashad Lucas scored nine in the quarter for the Bobcats, while Zeff Felton, Shamon Zanders and Tre Davis each had a basket to help out. Wilcox County’s Keyshawn Howard hit a three-pointer in the quarter and made a couple of layups to lead the Patriots in the first period with seven points. Desmond Tisdol, Demteric Young and Jordan Brown split the other nine Wilcox points in the quarter.

Young knocked down a three-pointer for the first points of the second quarter to give Wilcox a 19-16 lead, but Dooly countered with six straight points from Jeff Felton over the next few possessions to take a 22-19 lead.

A quick 6-0 run from Wilcox on scores by Cameron Patterson, Azavion Deans, and Tisdol put the Patriots back up 25-22 shortly after. Jeff Felton added two more baskets for Dooly before halftime, while Patterson and Tisdol each tacked on one more score apiece before half. Wilcox was in front 29-26 heading into the third period.

Each team subsequently managed a total of 20 points in a fast-paced third quarter. Wilcox got 11 of their 20 third quarter points from Brown, who knocked down three three-point shots and added a layup in the period. Tisdol scored four points in the quarter for the Patriots, while Howard had three and Patterson put in the other two.

Lucas led Dooly in the quarter with nine points, which included a fast break dunk. Jeff Felton, Zanders and Eric Ivory combined for the other 11 Bobcat points in the quarter. Wilcox was ahead 49-46 going into the final period.

Tisdol opened up the fourth quarter with a layup plus a free throw, but Dooly hit back with a 6-0 run on buckets by Zeff Felton, Jeff Felton, and Seve Sutton to tie the score at 52-52 at the 6:20 mark.

Dooly ended up taking a three-point lead at the 3:30 mark of the fourth quarter at 58-55 after a pull-up jump shot from Reggie Smith. The teams traded scores over the next few possessions, and a free throw by Deans left the score at 60-60 with 1:51 to play in the game.

Wilcox got the ball back after a quick defensive stop and a driving layup by Brown subsequently put the Patriots on top 62-60 at the 1:21 mark.

The Bobcats then split a pair of free throws and got a fast break layup from Zanders after a steal, which left Dooly with a 63-62 lead with 58 seconds to play.

Just ten seconds later Brown hit a the go-ahead three-pointer to put Wilcox up 65-63. The Patriots then came up with a defensive stop and Brown made two free throws to stretch the lead out to four points at 67-63 with less than 40 seconds to go.

Dooly later got a two-point shot to fall at the buzzer leaving Wilcox on top by the final score of 67-65.

Brown led all scorers on the night with 24 out of the 67 Wilcox points. Tisdol finished the game with 17 points and Howard had 11. Patterson pitched in with seven, while Young had six and Deans finished with two.

Jeff Felton was the top scoring Dooly player in the contest with 21 points. Lucas was the only other Bobcat in double-digits with 20 points in the game. Other Dooly player point totals: Zeff Felton and Zanders- seven points each; Ivory- four; Davis, Smith and Sutton- two each.

Wilcox County’s varsity teams are scheduled to play at Turner County tonight starting at 7 p.m. and then they play games Tuesday night at Lanier County starting at 6 p.m.

Dooly has region games at Macon County on the schedule for tomorrow night, and following that they will play home games against Truetlen on Tuesday night starting at 6 p.m.