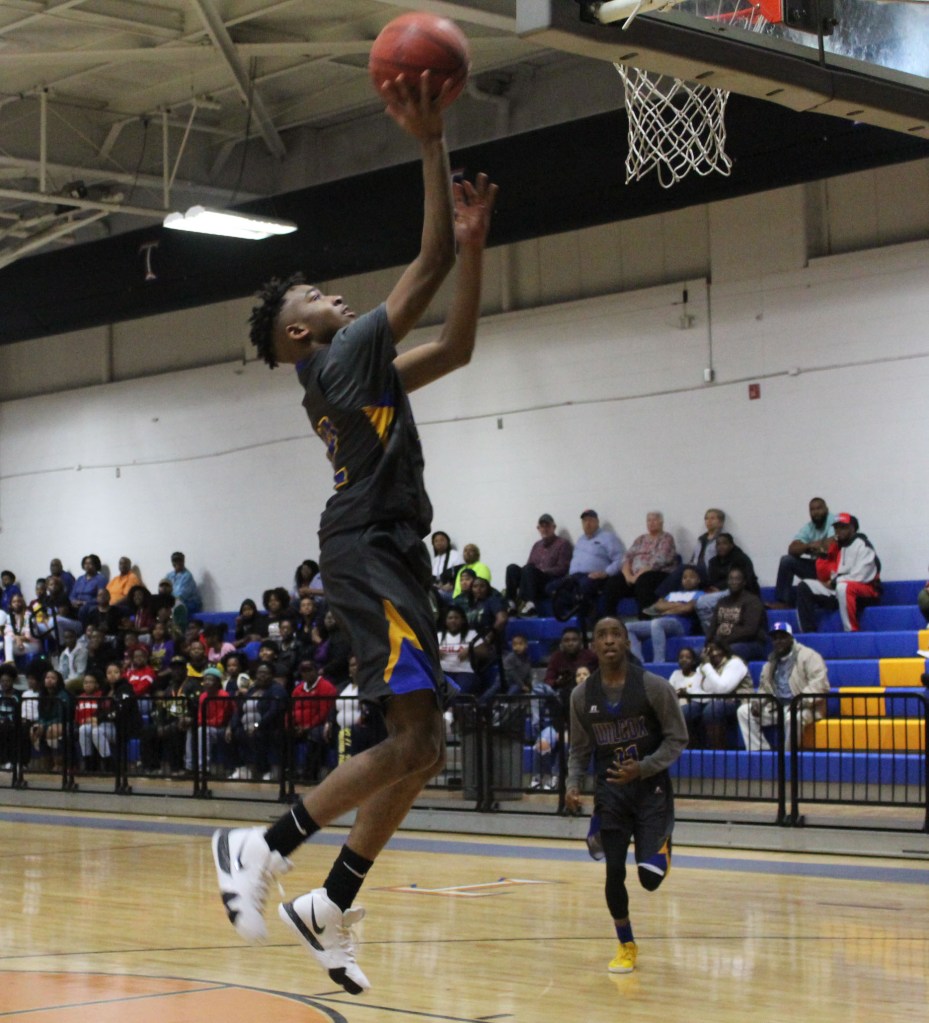 Wilcox County junior guard Demetric Young gets to the basket for a layup during Friday night's game against Turner County.

ASHBURN— Wilcox County’s basketball teams were in Ashburn on Friday night to take on region rival Turner County. The Lady Patriots of Wilcox got the job done in the fourth quarter of their game, winning 66-63 after Turner was able to come back from a large deficit to set up a close finish. The Patriots defeated Turner 87-73 in the boys’ game later in the night.

The Wilcox Lady Patriots were out to a one-point lead at the end of the first quarter with the early scoring coming mostly from JaMerical Marshall and Alayshia Dixon. Marshall knocked down two three-point shots in the quarter and added a pair of two-point baskets to lead Wilcox with 10 points in the quarter, while Dixon scored eight points in the period on three layups and a couple of free throws. Erianna Hargrove added the other two points for Wilcox in the quarter and the Lady Patriots led 20-19 going into the second period.

Turner County took the lead early in the second with four straight points, but the Lady Patriots took control soon after by outscoring the Lady Rebels 16-3 over the remainder of the period. Destiny Tisdol led Wilcox in the quarter with six points by way of two jump shots and a driving layup. Monica Carter pitched in with four points in the quarter on two jump shots, and Marshall kept her long range-shooting going with another three pointer. Grace Lawson also got on the board in the period for Wilcox with three points. The Lady Patriots were ahead 36-26 at the end of the first half.

Lawson made a layup for the first points of the third quarter to extend the Wilcox lead to 12 points, but the Lady Rebels went on a 12-2 run to cut the Patriot lead to 40-38 heading into the final quarter. Lawson also scored those only other two Wilcox points during the third period.

Turner tied the score at 40 apiece early in the fourth quarter on a basket from Mya Byrd, and from there the two teams swapped the lead several times over the final few minutes of the contest.

Lawson and Marshall scored consecutive baskets to put Wilcox back in front 44-40, but Turner came back with a 6-0 scoring run on scores by Byrd and Jaylasia Office to go up 46-44.

Wilcox countered with a 10-2 scoring run with four points from Tisdol and two apiece from Marshall, Lawson and Hargrove. The Lady Patriots were in front 54-48 about halfway through the final quarter.

Another 6-0 scoring run from Turner tied the score at 54 apiece, but Marshall and Lawson each added a basket shortly after to get Wilcox back in front 58-54.

A 7-1 Turner scoring run then saw the Lady Rebels take a 61-59 lead with a minute and 25 seconds to play in the contest. Dixon subsequently scored a layup for Wilcox on their next possession to tie the score back up at 61 aside. Wilcox then came up with a big defensive stop on the next Turner offensive possession, and a free throw from Hargrove then put the Lady Patriots back up by one at 62-61 with 50 seconds to play in the game.

Turner County’s Yakia Temple scored with 40 seconds to go to put the Lady Rebels back ahead by one point, but the score was Turner’s last of the game.

Marshall hit a jumper to put the Lady Patriots ahead 64-63 with 25 seconds to play, and Wilcox sealed the victory with a steal followed by a layup from Dixon just before the buzzer. Wilcox finished on top by the final score of 66-63.

Marshall was the top scorer for the Lady Patriots on the night with 21 points. Other Wilcox scorers in the game: Lawson and Dixon- 13 points apiece, Tisdol and Carter- 10 each, and Hargrove- five.

Office led Turner County in the game with 23 points and Byrd finished the contest with 22.

The Patriots used a pair of big first quarter scoring runs to take control of the boys’ game, and the Rebels were unable to catch up.

The Turner Rebels opened up with the games first points, but Wilcox scored the next 11. The two teams swapped scores over the next few minutes before the Patriots ended the opening quarter with another 11-0 scoring run capped off by a Desmond Tisdol dunk just before the buzzer. Tisdol totaled 11 points in the quarter for the Patriots, while Jordan Brown, Keyshawn Howard, Azavion Deans, and Demetric Young each got in on the scoring. Wilcox was ahead 27-11 at the end of the first period.

The Patriots outscored the Rebels 15-14 in the second quarter, with all of the Wilcox points being split between Howard, Brown and Markavian Singletary. The Patriots were up 42-25 at the halftime break.

Wilcox kept the offense going in the third quarter as they outscored Turner in the period 26-23. Young had 10 points in the quarter to lead Wilcox, while Brown, Deans, Tisdol, Howard and Chrisabian Marshall all got on the score sheet in the period as well. The Patriots led 68-48 entering the fourth quarter.

Turner chipped the lead down by outscoring Wilcox 25-19 over the course of the final quarter, but it was not enough to cause any problems for the Patriots. Tisdol, Howard and Brown combined for 13 of the 19 Wilcox points in the fourth period, while Singletary, Monterrius Edmond, and Christian Freeman each tacked on a bucket. Wilcox won the contest over their region rivals by the final score of 87-73.

Tisdol led the Patriots in scoring on the night with 20 points. Brown had 16, Howard posted 15, and Young also finished in double figures with 13 points. Other Wilcox final point totals: Deans- seven points, Singletary and Marshall- six points each, Edmond and Freeman- two apiece.

Keonvay Clark led the Rebels in the contest with a game high 22 points, while Demarcus Barnes was the only other Turner player in double-figures with 17.

The Patriots are now 13-1 on the season with a 7-0 record so far in region play.

Wilcox and Turner are scheduled to matchup again on Saturday, February 2 in Rochelle for their final games of the regular season.

The Wilcox teams are scheduled for three road region games this week, starting with Tuesday night at Lanier County beginning at 6 p.m. They will then travel to play Charlton on Friday night with the girls’ matchup set to tip off at 6, and following that they are scheduled to play at Telfair County on Saturday afternoon beginning at 4 p.m. 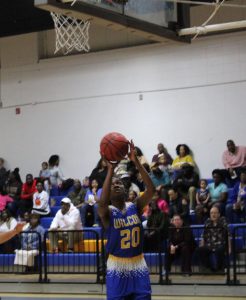