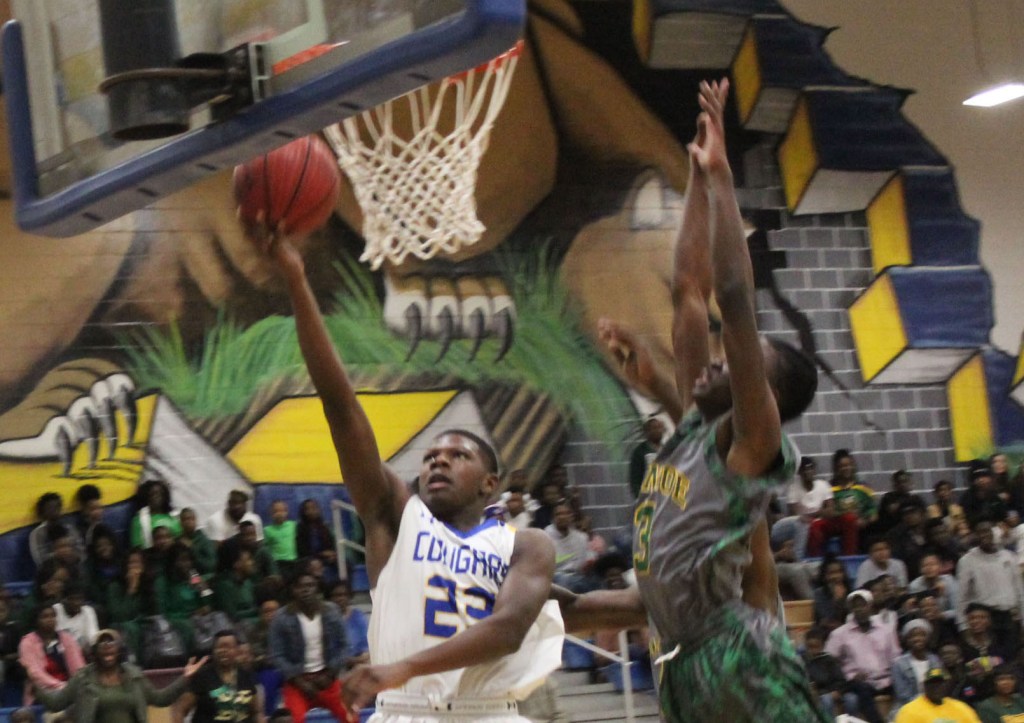 Crisp County's Cortez Thomas (23) gets behind the Monroe defense for a layup during Saturday night's game in Cordele.

CORDELE— Crisp County High School’s basketball teams hosted region opponents Cook County and Monroe f0r games over the weekend. The Cougars split their weekend games with a 60-54 win over Cook on Friday night and a 67-51 defeat to Monroe on Saturday night. The Lady Cougars were beaten in their games, 48-16 by Cook and 54-23 by Monroe.

The Cook County Hornets opened up Friday night’s game with the first 11 points over the start of the first quarter. Cook held the Cougars off the scoreboard up until Crisp County’s Cortez Thomas made a layup with 50 seconds to go in the period. The Hornets then tacked on a free throw before the teams headed into the second quarter with Cook ahead 12-2.

The Cougars quickly turned the game around from there by outscoring Cook 21-7 in the second period. PJ Coleman hit a jump shot for the Cougars to start the quarter out and KJ Williams knocked down a three-pointer shortly after to get the Cougars’ offense going.

The Hornets briefly regained control with a 7-2 scoring run over the next few possessions to take a 19-9 lead, but the Cougars finished the first half on a 14-0 run. Tubby Spivey started the Crisp scoring run with a fast break layup, and from there Coleman tacked on six more points on three layups, while Damion Cross and Nathan Willis each added three points of the 14. The Cougars were in front 23-19 at the end of the first half.

Third quarter action saw the Cougars widen their lead as they outscored Cook 20-13 in the period. Willis and Williams each hit three-point shots in the period, while Malik Hall, Ty McKenzie, Spivey, Coleman and Thomas all added scores in the quarter. Crisp was ahead 43-32 going into the final quarter.

An 11-3 Hornet run to start the fourth quarter cut the Cougar lead to 46-43 with 5:45 to go in the game. Crisp responded by outscoring Cook 14-11 down the stretch, led by five points from Williams, as well as scores from Coleman, Willis, Hall, McKenzie and Spivey, to defeat the Hornets by the final score of 60-54.

Coleman was the leading scorer for the Cougars on the night with 14 points to go along with two rebounds, three assists, and three steals. Williams was the only other Crisp player in double-figures with 13 points to go with seven rebounds, one assist and two steals.

Earlier in the night, Cook County defeated the Lady Cougars by a final score of 48-16.

In Saturday night’s boys’ contest, the Monroe Tornadoes jumped out to an 8-0 first quarter lead less than two minutes into the game. The Cougars scored the next four points on a layup by Fox and a jumper from Williams, but Monroe was ahead 16-4 after answering with an 8-0 run.

The Cougars took some momentum with them into the second period by scoring the final seven points in the first on a three-pointer and a layup from Hall, as well as a score from Thomas. Monroe was in front 16-11 going into the second quarter.

Crisp outscored the Tornadoes 18-17 in the second period led by six points from Coleman. Hall chipped in with four points in the quarter, while Willis, Spivey, Williams and McKenzie each got in on the scoring. The Cougars trailed 33-29 going into halftime.

Monroe scored the first three points of the third period to extend the lead out to 36-29. The Cougars then went on a 10-5 scoring run over the next several minutes to cut Monroe’s lead to two points at 41-39. Willis and Williams both hit three-point shots during that stretch for the Cougars, while Fox and Thomas combined for the other four points on the run. Monroe later scored the last four points of the quarter to take a 45-39 lead with them into the fourth period.

Monroe continued their scoring run after the conclusion of the third period by scoring the first 11 points of the fourth to get in front 56-39 with just over five minutes to play.

Spivey, Williams and Hall gave the Cougars some life with scores that accounted for a 7-0 Crisp County run to bring the score to 56-46 in favor of Monroe, but the Tornadoes outscored Crisp 11-5 over the remaining few minutes to come away with the 67-51 win.

Hall finished the game as the leading scorer for the Cougars with 14 points to go with a rebound and an assist.

The Cougars currently have an overall record of 5-11 with a 2-1 mark in region play so far on the season.

Monroe defeated the Lady Cougars earlier on Saturday night by a final score of 54-23.

Up next for Crisp County’s teams will be region home games against Worth County tomorrow night starting at 6 p.m.