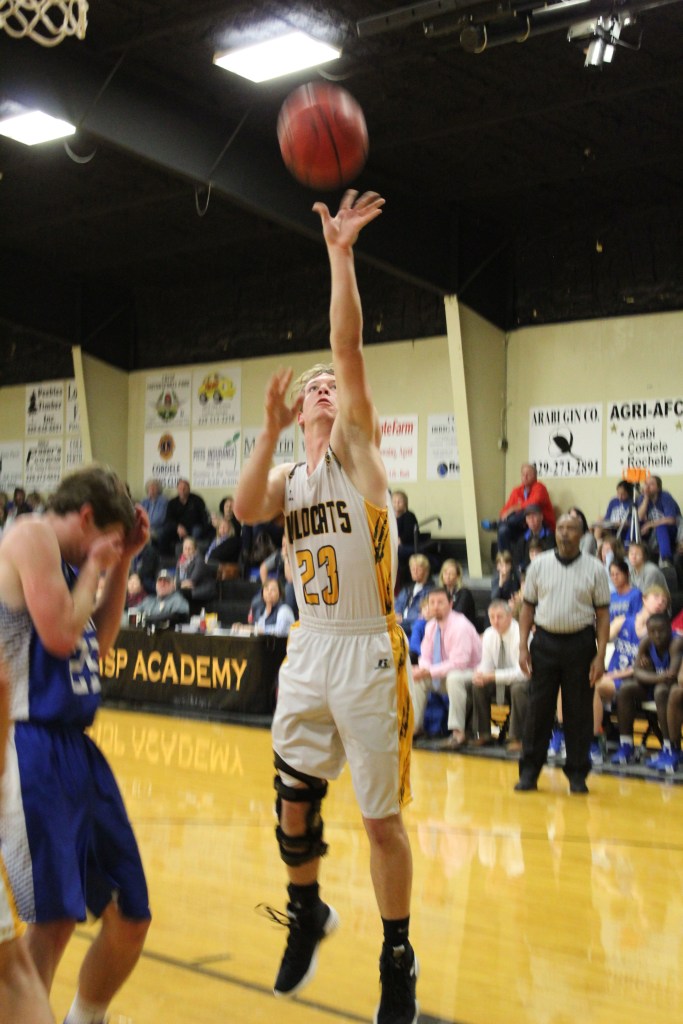 Crisp Academy's Griffin Gravitt (23) goes up for a layup during the CA win over Terrell Academy on Tuesday night.

CORDELE— Crisp Academy’s varsity boys’ basketball team made it eight wins out of their last nine games with a home region victory over the Terrell Academy Eagles (10-5) on Tuesday night. The Eagles won the first meeting between the two teams earlier this month in Dawson by a final score of 59-54, but the Wildcats got the best of Terrell in the rematch Tuesday by a final of 61-53.

Terrell had a 15-13 lead at the end of the first quarter of Tuesday night’s contest. Cooper Folds was CA’s offensive leader in the first period with seven points on a three-pointer and a pair of two-point baskets, while Griffin Gravitt and Spencer Stubbs combined for the other six Wildcat first quarter points.

CA subsequently outscored the Eagles 16-12 in the second period led by three Julian Floyd three-point baskets. Gravitt, Stubbs and Folds all added to their point totals in the period as well, and the Wildcats were ahead 29-27 at halftime.

Third quarter action saw the Wildcats outscore Terrell 20-11 led by nine more points from Floyd that included his fourth and fifth made three-pointers of the night. Billy Hardin also knocked down a three-pointer to get on the third period score sheet, and Gravitt added four points to his total with a two-point basket and two free throws. Stubbs and Trey Williams each tacked on two points in the third quarter, and the Wildcats were in front 49-38 entering the fourth.

The Eagles outscored CA 15-12 in the final period, but the Wildcats finished on top by the final score of 61-53. Folds had six of the 12 points, while Gravitt and Stubbs each put in three for the rest of the fourth quarter scoring.

Floyd was the leading Wildcat scorer in the game with 18 points and Gravitt finished the night with 15. Other CA final point totals from the win over Terrell: Folds- 14 points, Stubbs- nine, Hardin- three, and Williams- two.

The win put the Wildcats at 10-4 overall on the season and 3-2 in region play.

The varsity Lady Wildcats fell to the Lady Eagles of Terrell (7-8) earlier in the night by a final score of 55-14. The defeat put the Lady Cats at 3-11 on the season and 0-5 in region play.

CA’s teams are scheduled for away games in Douglas tomorrow night against Citizens Christian Academy starting at 6:30 p.m.