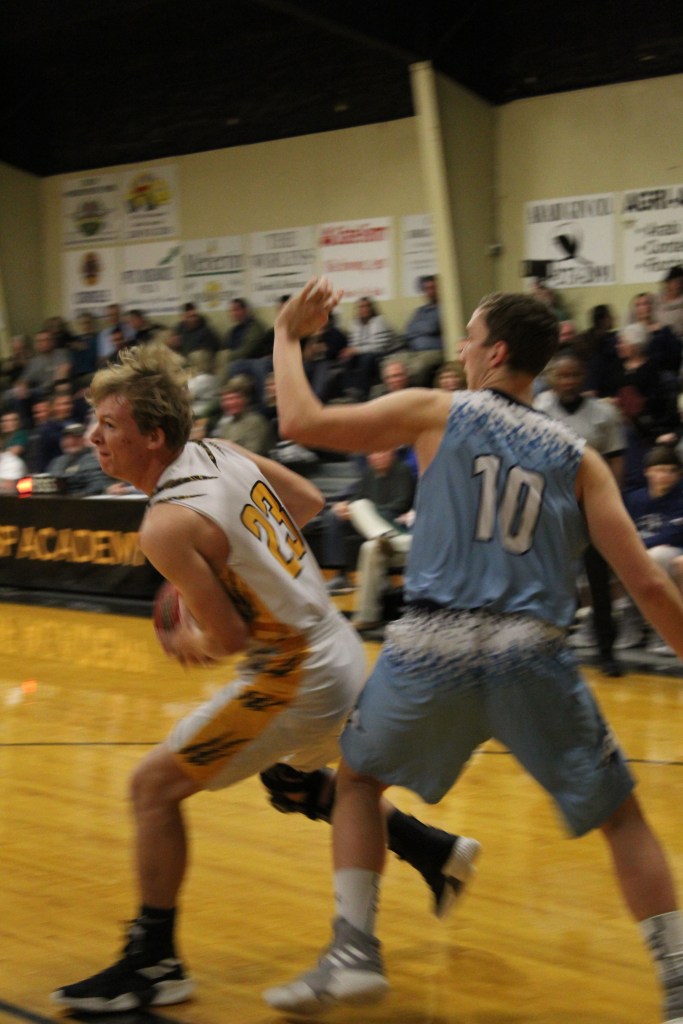 Crisp Academy senior Griffin Gravitt (23) fights his way past a Terrell Academy defender during Friday night’s 68-62 CA win. Gravitt led the Wildcats in scoring in the contest with 25 total points.

Crisp Academy’s basketball teams hosted Southwest Georgia Academy for GISA region 3-AA games on Friday night. The Wildcats picked up the region win over SGA in their contest by a final score of 68-62, while the Lady Cats fell to SGA 45-32.

The Wildcats jumped out to a 17-8 lead going into the second quarter of Friday night’s game against the SGA Warriors. Griffin Gravitt put in eight points for the Widlcats in the first quarter, while Spencer Stubbs scored six. Cooper Folds added two points in the period, and Trey Williams hit a free throw for the remainder of the 17 points in the first.

A high-scoring second quarter saw the Warriors outscore the Wildcats 22-21, but CA had a 38-30 lead at the half. Stubbs and Williams put in six points apiece for CA in the second period. Gravitt, Folds, and Julian Floyd each tacked on three points for the Wildcats in the quarter.

CA then outscored SGA 14- 10 in the third quarter behind nine more points from Gravitt. Folds and Stubbs combined for the other five Wildcat points in the period, and Crisp Academy was ahead 52-40 entering the final quarter.

The Warriors edged CA in fourth period scoring 22-16, but the Wildcats held on for the 68-62 region victory. Folds had the high-point mark for CA in the fourth period with six points on three free throws and a three-point shot. Gravitt tacked on five more to his total for the night in the quarter, while Stubbs, Williams and Billy Hardin all pitched in a portion of the scoring.

Gravitt finished his big night with a total of 25 points to lead the Wildcats. Stubbs put up 17 total points, and Folds was also in double-figures for CA with 13. Williams had nine points, while Floyd had three and Hardin had one.

The win put the Wildcats at 13-4 overall on the season and 5-2 in region play.

Earlier in the night, SGA defeated the Lady Cats by a final score of 45-32.

Maddie Milani and Elizabeth Williams both ended the game with eight points to lead the Lady Wildcats on the night. Marley Suddeth was close behind with a total of seven, while Eliza Hill put in six points and Mia Purvis scored three.