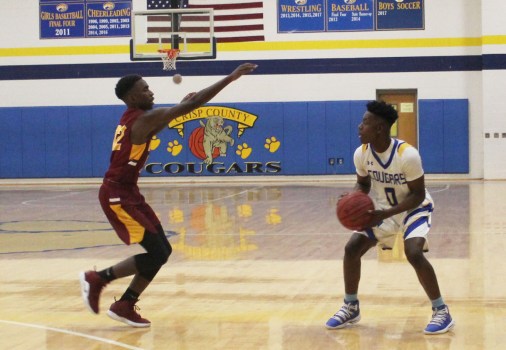 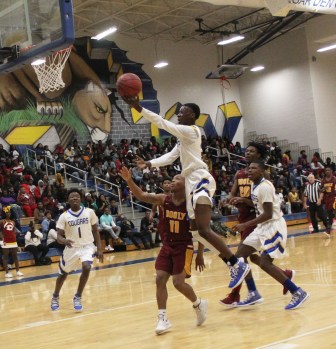 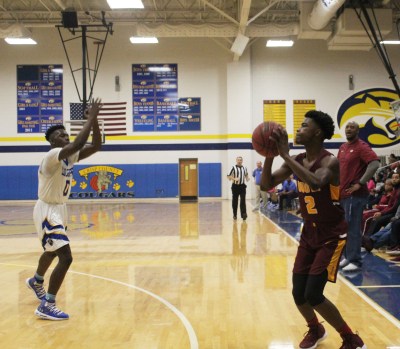 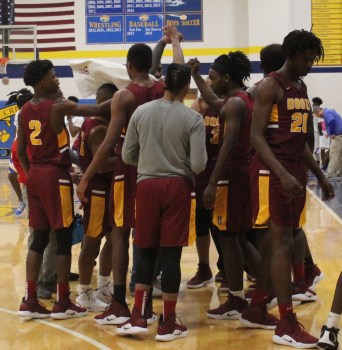 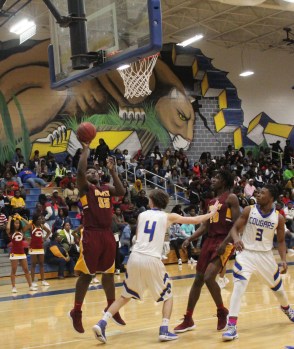 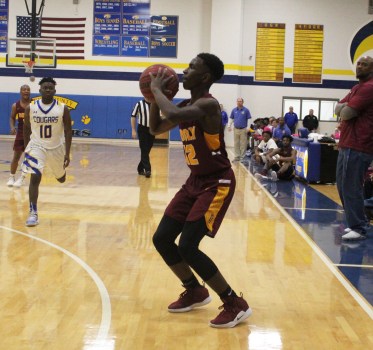 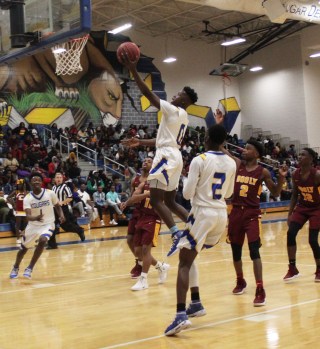 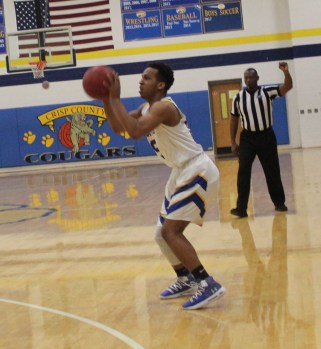 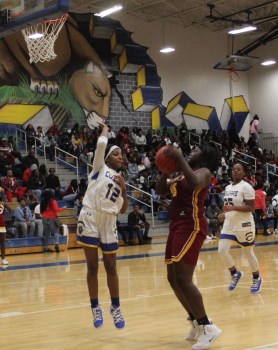 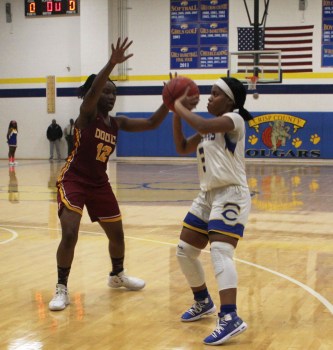 CORDELE— The Crisp County and Dooly County high school basketball teams matched up for the second time this basketball season on Saturday night with a pair of late season non-region contests in Cordele. Dooly took the sweep in the previous meeting back on December 29 in Vienna. Crisp took the win in the boys’ matchup this time by a final score of 60-47, while the Lady Bobcats defeated the Lady Cougars for the second time this season on Saturday night by a final score line of 55-32.

In the boys’ varsity game, the Dooly Bobcats were out to an 11-10 lead at the end of the first quarter behind four points from Rashad Lucas, a three-pointer by Shamon Zanders, and two points apiece from Jeff Felton and Seve Sutton.

Crisp’s first quarter scoring came by way of a three-point shot from Willie Poole, a layup and a free throw from Ty McKenzie, and buckets by PJ Coleman and KJ Williams.

Crisp subsequently outscored Dooly 13-11 in the second quarter to grab a one-point lead going into halftime. McKenzie put in nine of the 13 Cougar points on a layup, a pair of jump shots, and a three-pointer, while Malik Hall and Coleman combined for the other four Crisp points in the quarter on fast break layups.

Jeff Felton put in four points for the Bobcats in the quarter, with the other seven coming from Lucas, Eric Ivory and Tre Davis. The Cougars were ahead at halftime by a score of 23-22.

Crisp kept the momentum going at the start of the second half with a 17-3 scoring run in the third quarter. In total CCHS outscored the Bobcats 19-9 in the third period to take a 42-31 lead into the fourth quarter. McKenzie added six more points to his total for the night in the third period. Coleman contributed four more points in the quarter for the Cougars, while Poole, Williams, Hall, and AJ Lofton all added scores.

Dooly County’s Zeff Felton scored the first three points of the fourth quarter to get the Bobcats back within eight points of Crisp County’s lead, but the Cougars put the game away by outscoring Dooly over the remainder of the period 19-13 for the final score of 60-47.

Hall led Crisp in the fourth period with six points. McKenzie tacked on four more points to his total in the period and capped his night off with a dunk towards the end of the game. Poole, Coleman and Mar Daniels were also on the score sheet for Crisp in the fourth.

McKenzie finished with a total of 22 points to lead the Cougars in the win. Coleman put up 12 points and Hall also finished in double-digits with 10 points. Other final point totals for CCHS: Poole- eight points, Williams- four, Daniels and Lofton- two each.

Jeff Felton was the leading scorer for the Bobcats with 13 points, and Lucas was the only other Dooly player in double-figures with 10. Other DCHS final point totals: Zanders and Brown- five points each, Sutton and Davis- four apiece, Zeff Felton and Ivory- three each.

The Cougars moved to 8-13 on the season with the win, while the defeat put the Bobcats at 14-7 overall.

Earlier in the night, the girls’ game got out to a competitive start as Dooly County had a 9-8 lead going into the second quarter. The Lady Bobcats got four points from Ta’kerria Lee, three from Sha’Nyah Bolden, and two from Tierra Burden for their nine first quarter points. Adasia Lee, Aaliyah Hardemon, E’lacious Holt, and Tykeemah Armstrong each had two points in the first period for Crisp.

The Lady Cougars took the lead at 10-9 at the start of the second quarter on a layup by Peyton Bozeman, but the Lady Bobcats outscored Crisp 14-6 over the remaining time in the period to take a 23-16 lead into halftime. Burden put in six of the 14 Dooly second quarter points, while Miracle Fields, Bolden, Jashuma Greene, Season Adams and Ta’kerria Lee combined for the other eight. Hardemon, Jadah Mumphrey and Vernasia Sanders split the other Crisp County points in the quarter after Bozeman’s score.

The Lady Bobcats took complete control of the game in the third quarter by outscoring CCHS 21-4. 11 of the 21 Dooly County points belonged to Ta’kerria Lee, and the other 10 points were split between Jasmine Clark (six points on a pair of three-pointers) and Burden (layup and a three-pointer). Adasia Lee and Chelsey Harvey each had two in the period for the Lady Cougars. Dooly led 44-20 going into the fourth quarter.

The Lady Cougars outscored Dooly 12-11 in the fourth period, but the Lady Bobcats finished on top by the final score line of 55-32. Lee, Fields, Burden, Bolden and Kaleyia Smith all scored in the quarter for Dooly County.

Bozeman had six points on one three-point basket, and a layup plus a free throw in the quarter for Crisp. Mumphrey had four in the period for the Lady Cougars, and Nikujha Smith scored the other Crisp County points in the quarter.

Ta’kerria Lee led the Lady Bobcats in scoring on the night with a total of 19 points and Burden also finished in double-figures with 14. Other Dooly County scoring totals in the game were as follows: Bolden- eight points, Clark- six, Fields- four, Smith- two, Greene and Adams- one each.

The Lady Bobcats had their 15 game winning streak come to an end at Marion County (22-0) on Friday night, but the win over Crisp put Dooly at 17-4 overall on the season, while the defeat put the Lady Cougars at 1-20 on the season.

Dooly County’s varsity boys’ team knocked off Hawkinsville tonight by a final score of 53-38, and both Bobcat teams will be back in action at Perry High School on Wednesday night starting at 6 p.m.