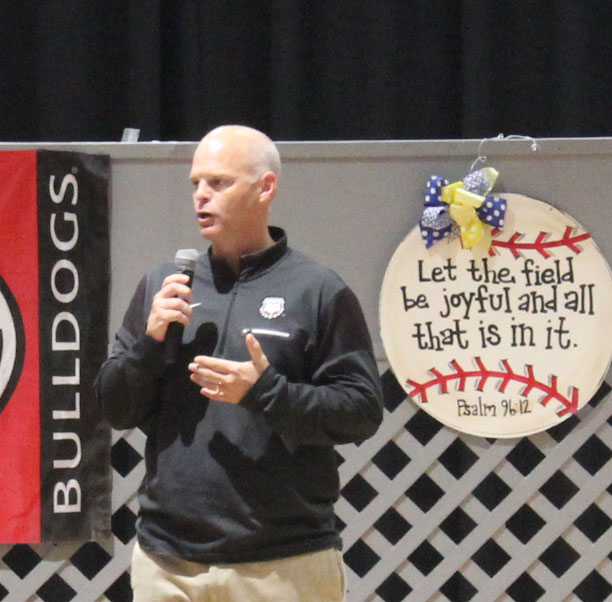 CORDELE— Scott Stricklin, Head Baseball Coach of the University of Georgia, attended Monday night’s Cougar baseball dinner at Crisp County High School and had some important words of advice for the young ball players in attendance. He spoke for nearly 30 minutes about overcoming adversity and the qualities that a good teammate and hard-working ball player needs to possess.

Coach Stricklin went on to talk some about how baseball helps prepare players for tough situations in life.

“Baseball is easy compared to what you guys are going to have to go through at some point [in life] but it helps prepare you,” he said.

He also spoke about what most college coaches look for in players that they want to recruit.

“There is only so many things that you can control. You can control your effort level and you can control how much you prepare yourself. We look for guys that are going to play and do what they are supposed to do at all times, and are good teammates,” he explained.

Later on, Coach Stricklin spoke about having a good work ethic and used former Major League Baseball player David Eckstein as his example of a hard working player.

Another important portion of Coach Stricklin’s message was about how social media posts reflect the kind of attitude an athlete has. He explained that certain types of posts on various social media outlets can have a negative effect on an athlete later on in recruiting because that is something coaches keep an eye on.

“Social media… it’s scary. The things that you share do not go away. We are going to see what kind of person you are and what kind of character that you have, because that is important,” he said.

“What you do when things get tough is really going to define you. Because when you make a mistake or you have some adversity, it’s not the mistake or the adversity that people look at. It is what you do next that matters,” said Coach Stricklin. “You can go 0-3 and strike out with the bases loaded three times in a row, and your fourth at bat can win the game. That’s why baseball is so beautiful. So my challenge to you is to be that kid that you would want to coach,” he concluded.

Crisp County Head Baseball Coach David Lamberth then presented Coach Stricklin with a gift in appreciation for coming to speak at the event.

The CCHS baseball team begins their season on Tuesday, February 12, at Peach County.