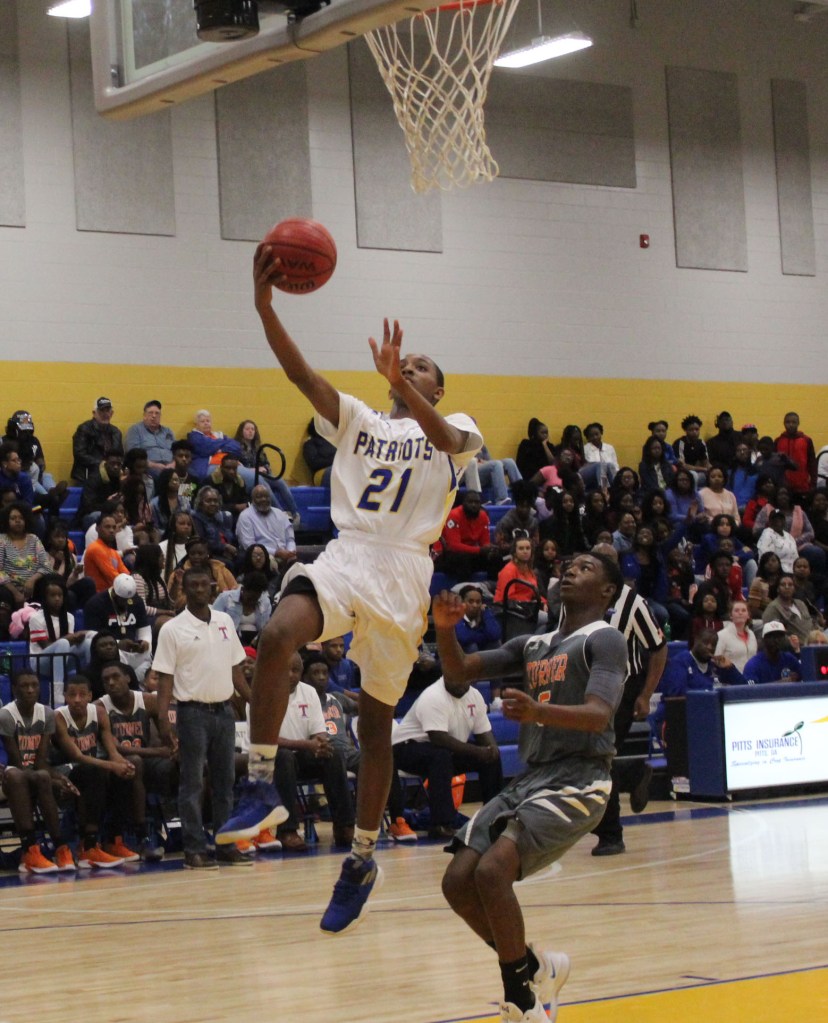 Wilcox County's Markavian Singletary takes the ball to the basket for a layup during Saturday night's 80-54 Patriot win over Turner County in Rochelle.

ROCHELLE— The Wilcox County High School boys’ basketball team closed out their regular season schedule with wins over the weekend against Irwin County 76-74, and Turner County 80-54.

The Patriots defeated Irwin County 76-74 in a thrilling contest on Friday night to retake first place in the regular season region standings. Keyshawn Howard was the leading scorer in the game for the Patriots with 27 points, and he added nine rebounds and three assists on the stat sheet. Desmond Tisdol finished the contest with 20 points, 13 rebounds, two assists and four blocked shots. Jordan Brown also put in a big performance for Wilcox with 16 points, five rebounds, nine assists, and three steals.

In Saturday’s game against the Turner Rebels, the Patriots were ahead 15-13 after a competitive first quarter, and they pulled away shortly after with a big second period before running away with the 80-54 win.

The Lady Patriots were also in action this weekend, and they picked up a 65-15 win over Irwin, but fell to Turner in a close game 56-52.

Saturday night’s game saw the Turner County Lady Rebels make a big second half comeback to take a win away from the Lady Patriots in Rochelle by the final score of 56-52.

The Wilcox County Lady Patriots finished the regular season as the third seeded team in the standings with a 15-9 overall record (11-5 in region). They will enter the 2-A region tournament in the third round on Wednesday night in Lanier County at 7 p.m. Wilcox will be playing the winner of Tuesday night’s second round matchup between Echols County and Atkinson County for a chance to play on their home floor in Rochelle for the semifinal round on Friday night.

The Patriots will enter the boys’ tournament on Friday night with a semifinal game on their home floor starting at 8:30 p.m. Their opponent will not be known until after Wednesday night’s quarterfinal round is complete.